Towards Delivery of the World's Largest Negative Emissions Project 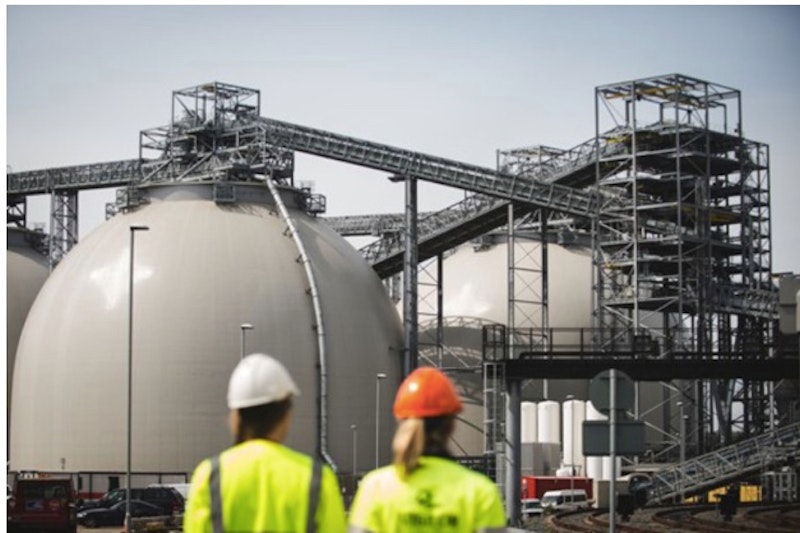 Drax Group and Mitsubishi Heavy Industries Engineering Ltd, part of Mitsubishi Heavy Industries (MHI) Group, have agreed a long-term contract for Drax to use its carbon capture technology, the Advanced KM CDR processTM, in what would be the largest deployment of negative emissions in power generation anywhere in the world.
The contract, which combines UK innovation and world-leading Japanese technology, will see Drax license MHI's unique carbon capture solvent, KS-21TM, to capture CO2 at its power station near Selby, North Yorkshire.
Drax is already the largest decarbonisation project in Europe, having converted its power station to use sustainable biomass instead of coal, reducing its emissions by more than 85%. By deploying BECCS technology, Drax aims to go further - becoming carbon negative by 2030. The first BECCS unit at Drax could be operational as soon as 2027, supporting thousands of jobs across the North of England as soon as 2024, and capturing and storing at least 8 million tonnes of CO2 a year by 2030. For further information see the IDTechEx report on Carbon Capture, Utilization, and Storage (CCUS) 2021-2040.
Drax is the first company to sign a contract to deploy carbon capture technology at scale in the UK. The project combines MHI's proven and world-leading technology with offshore geological storage under the North Sea, helping the UK achieve its target to cut carbon emissions by 78% by 2035 and demonstrates global climate leadership ahead this weekend's G7 in Cornwall and of COP26 in Glasgow in November.
As part of the agreement, MHI plans to locate its core CCS team at the company's European headquarters in London and explore additional employment opportunities in the UK in future. MHI is also looking at ways to strengthen its supply chain, including the potential production of its proprietary solvent in the UK.
Drax has already successfully trialled MHI's carbon capture technology in a pilot that started in 2020 to test two of MHI's proprietary solvents (KS-1TM and KS-21TM).
Will Gardiner, Drax Group CEO, said: "The world urgently needs to move from making climate pledges to taking climate action. This game-changing contract between Drax and MHI could contribute to a decade of global environmental leadership from the UK and provide further stimulus to a post-Covid economic recovery. Carbon capture technologies like BECCS are going to be absolutely vital in the fight against the climate crisis. Subject to the right regulatory framework being in place, Drax stands ready to invest further in this essential negative emissions technology, which not only permanently removes CO2 from the atmosphere but also delivers the reliable, renewable electricity needed for clean, green economic growth."
Kenji Terasawa, President & CEO, Mitsubishi Heavy Industries Engineering, said: "We are very proud to have been selected as Drax's technology partner and we firmly believe that our carbon capture technology will make a significant contribution to the UK and wider global community achieving their net zero targets. We look forward to expanding our presence in the UK and developing a centre of excellence for the deployment of carbon capture technology across Europe, the Middle East and Africa region. MHI aims to continue reducing greenhouse gases globally by providing reliable and economically feasible carbon capture technology, supported by research and development activity over 30 years and commercial records around the world."
With an effective negative emissions policy and investment framework from the government, BECCS could be deployed at Drax as soon as 2027 - delivering the UK's largest carbon capture project and permanently removing millions of tonnes of carbon dioxide from the atmosphere each year.
Drax has already kickstarted the planning process to deploy BECCS at its power station in North Yorkshire - if successful, work could get underway to build BECCS at Drax as soon as 2024, with the creation of thousands of jobs.
Source: JCNNewswire