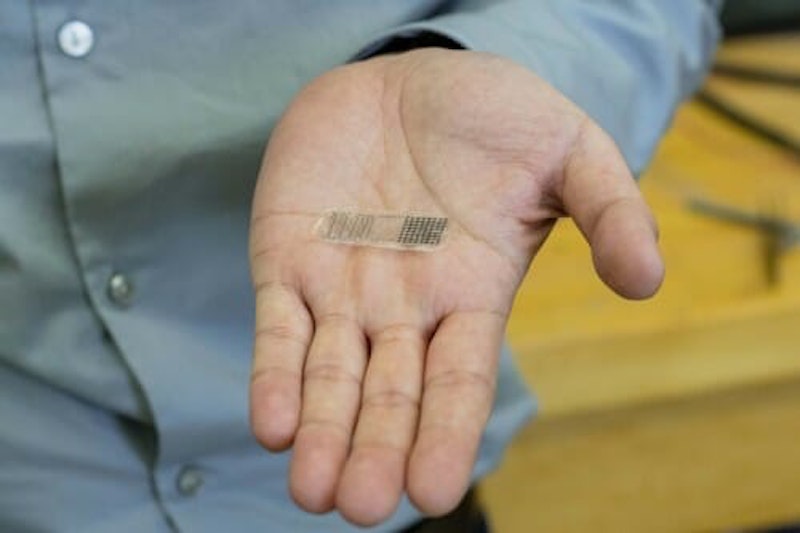 In 2017, Green Bay Packers quarterback Aaron Rodgers broke his right collarbone in a game against the Minnesota Vikings. Typically, it takes about 12 weeks for a collarbone to fully heal, but by mid-December fans and commentators were hoping the three-time MVP might recover early and save a losing season. So did Xudong Wang, a professor of materials science and engineering at the University of Wisconsin-Madison and an expert in creating thin, movement-powered medical devices. "I started wondering if we could provide a new solution to bring athletes back to the field quicker than ever," Wang says.
Researchers know that electricity can help speed up bone healing, but "zapping" fractures has never really caught on, since it requires surgically implanting and removing electrodes powered by an external source. A major update of that same electrostimulation concept, Wang's latest invention didn't come in time to help the 2017 Packers — however, it may help many others by making electrostimulation a much more convenient option to speed up bone healing. For further information see the IDTechEx report on Battery Elimination in Electronics: Market Impact IoT, 6G, Healthcare, Wearables 2021-2041.
His thin, flexible device is self-powered, implantable and bioresorbable, so once the bone is knitted back together, the device's components dissolve within the body. Wang and his collaborators, including Weibo Cai, a UW-Madison professor of radiology and medical physics, described the new device in the journal Proceedings of the National Academy of Sciences.
Bone is a piezoelectric material, meaning it produces a tiny bit of electricity when placed under strain. These jolts of electricity stimulate factors that promote bone growth and healing, which is why electrostimulation is an effective therapy. While there are external stimulators that create an electric field to accelerate healing indirectly, the ideal solution is stimulating the bone directly. Putting the device inside the body, however, has unique requirements — not the least of which is powering it, according to Wang.
"The ideal case is to have the device be self-generating, which was something that didn't exist before this," he says.
To create the new fracture electrostimulation device, or FED, Wang and his team started with a triboelectric nanogenerator, a thin-film device with microstructured surfaces that converts mechanical energy produced by tiny movements into electric power. They coupled the nanogenerator with a pair of electrodes to distribute the electric field to the bone. They built these ultrathin, biodegradable and bioresorbable components on a substrate of poly(lactic-co-glycolic acid), a commonly used FDA-approved biocompatible polymer.
The researchers' initial tests confirmed that small movements of the device did indeed create an electrical stimulation of about 4 volts, which it could sustain for over six weeks. They then tested the device on rats.
The animals implanted with the device completely recovered from a tibia fracture in about six weeks, much more quickly than animals in a control group. The mineral density and flexural strength of the healed bones also reached the same level as healthy bones in the animals that received the electrostimulation. After the treatment, the devices degraded and absorbed into the rats' bodies with no complications and no need for surgical removal.
Wang says that it's possible to fine-tune how long the stimulator will last within the body — from weeks to months — by tweaking the properties of the bioresorbable material coating the device. The thin, flexible device is self-powered, implantable and bioresorbable, so once the bone is knitted back together, the device's components dissolve within the body. Eventually, Wang would like to scale up the fracture electrostimulation device so it will work in humans. But for these self-powered devices, the energy source can be a factor.
"Typically, when someone has a broken bone, they need to restrict their movement," he explains. In other words, someone wearing a cast might not produce enough mechanical energy to power the triboelectric nanogenerator. "The way a rat moves provides constant stimulation for the device, but for a broken bone in a human that can't be moved, that's an issue," says Wang.
However, the human body provides virtually endless sources of movement that could power the fracture electrostimulation device if the broken bone must remain immobile. "We may need the device to respond to other types of internal mechanical sources, like blood pressure changes," says Wang, who's already looking to the FED's future. "It will be very interesting and impactful to address the development from animal to human," he says.
Cai is also excited to continue the work. "Our continued collaborations over the last decade have been very productive and highly synergistic," says Cai, who has worked with Wang to create a bandage that works along similar principles and an implantable weight loss device, among other projects. "The Wang group designs and fabricates many intriguing devices, and our group can test those in vivo in various small animal models for subsequent large animal studies and potential clinical translation."
Source and top image: University of Wisconsin-Madison

In the cases where immobility of the limb is an issue, could the devise be connected to the nerve to get electrical stimulation?