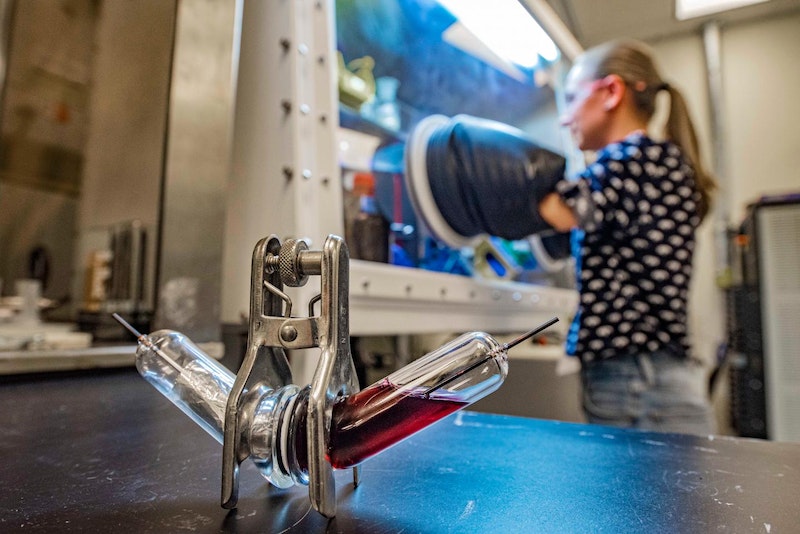 Researchers at Sandia National Laboratories have designed a new class of molten sodium batteries for grid-scale energy storage. The new battery design was shared in a paper published n the scientific journal Cell Reports Physical Science. Molten sodium batteries have been used for many years to store energy from renewable sources, such as solar panels and wind turbines. However, commercially available molten sodium batteries, called sodium-sulfur batteries, typically operate at 520-660 degrees Fahrenheit. Sandia's new molten sodium-iodide battery operates at a much cooler 230 degrees Fahrenheit instead.
"We've been working to bring the operating temperature of molten sodium batteries down as low as physically possible," said Leo Small, the lead researcher on the project. "There's a whole cascading cost savings that comes along with lowering the battery temperature. You can use less expensive materials. The batteries need less insulation and the wiring that connects all the batteries can be a lot thinner." However, the battery chemistry that works at 550 degrees doesn't work at 230 degrees, he added. Among the major innovations that allowed this lower operating temperature was the development of what he calls a catholyte. A catholyte is a liquid mixture of two salts, in this case, sodium iodide and gallium chloride.

A basic lead-acid battery, commonly used as a car ignition battery, has a lead plate and a lead dioxide plate with a sulfuric acid electrolyte in the middle. As energy is discharged from the battery, the lead plate reacts with sulfuric acid to form lead sulfate and electrons. These electrons start the car and return to the other side of the battery, where the lead dioxide plate uses the electrons and sulfuric acid to form lead sulfate and water. For the new molten sodium battery, the lead plate is replaced by liquid sodium metal, and the lead dioxide plate is replaced by a liquid mixture of sodium iodide and a small amount of gallium chloride, said Erik Spoerke, a materials scientist who has been working on molten sodium batteries for more than a decade. For further information see the IDTechEx report on Batteries for Stationary Energy Storage 2021-2031.
When energy is discharged from the new battery, the sodium metal produces sodium ions and electrons. On the other side, the electrons turn iodine into iodide ions. The sodium ions move across a separator to the other side where they react with the iodide ions to form molten sodium iodide salt. Instead of a sulfuric acid electrolyte, the middle of the battery is a special ceramic separator that allows only sodium ions to move from side to side, nothing else.
"In our system, unlike a lithium ion battery, everything is liquid on the two sides," Spoerke said. "That means we don't have to deal with issues like the material undergoing complex phase changes or falling apart; it's all liquid. Basically, these liquid-based batteries don't have as limited a lifetime as many other batteries."
In fact, commercial molten sodium batteries have lifetimes of 10-15 years, significantly longer than standard lead-acid batteries or lithium ion batteries.

Long-lasting batteries that are safer

Sandia's small, lab-scale sodium-iodide battery was tested for eight months inside an oven. Martha Gross, a postdoctoral researcher who has worked on the laboratory tests for the past two years, conducted experiments charging and discharging the battery more than 400 times over those eight months.
Because of the COVID-19 pandemic, they had to pause the experiment for a month and let the molten sodium and the catholyte cool down to room temperature and freeze, she said. Gross was pleased that after warming the battery up, it still worked.
This means that if a large-scale energy disruption were to occur, like what occurred in Texas in February, the sodium-iodide batteries could be used, and then allowed to cool until frozen. Once the disruption was over, they could be warmed up, recharged and returned to normal operation without a lengthy or costly start-up process, and without degradation of the battery's internal chemistry, Spoerke added.
Sodium-iodide batteries are also safer. Spoerke said, "A lithium ion battery catches on fire when there is a failure inside the battery, leading to runaway overheating of the battery. We've proven that cannot happen with our battery chemistry. Our battery, if you were to take the ceramic separator out, and allow the sodium metal to mix with the salts, nothing happens. Certainly, the battery stops working, but there's no violent chemical reaction or fire."
If an outside fire engulfs a sodium-iodide battery, it is likely the battery will crack and fail, but it shouldn't add fuel to the fire or cause a sodium fire, Small added.
Additionally, at 3.6 volts, the new sodium-iodide battery has a 40% higher operating voltage than a commercial molten sodium battery. This voltage leads to higher energy density, and that means that potential future batteries made with this chemistry would need fewer cells, fewer connections between cells and an overall lower unit cost to store the same amount of electricity, Small said.
"We were really excited about how much energy we could potentially cram into the system because of the new catholyte we're reporting in this paper," Gross added. "Molten sodium batteries have existed for decades, and they're all over the globe, but no one ever talks about them. So, being able to lower the temperature and come back with some numbers and say, 'this is a really, really viable system' is pretty neat."

The future of sodium-iodide batteries

The next step for the sodium-iodide battery project is to continue to tune and refine the catholyte chemistry to replace the gallium chloride component, Small said. Gallium chloride is very expensive, more than 100 times as expensive as table salt.
The team is also working on various engineering tweaks to get the battery to charge and discharge faster and more fully, Spoerke added. One previously identified modification to speed up the battery charging was to coat the molten sodium side of the ceramic separator with a thin layer of tin.
Spoerke added that it would likely take five to 10 years to get sodium-iodide batteries to market, with most of the remaining challenges being commercialization challenges, rather than technical challenges.
"This is the first demonstration of long-term, stable cycling of a low-temperature molten-sodium battery," Spoerke said. "The magic of what we've put together is that we've identified salt chemistry and electrochemistry that allow us to operate effectively at 230 degrees Fahrenheit. This low-temperature sodium-iodide configuration is sort of a reinvention of what it means to have a molten sodium battery."
The development of the new sodium battery was supported by the Department of Energy's Office of Electricity Energy Storage Program.
Source and top image: DOE/Sandia National Laboratories