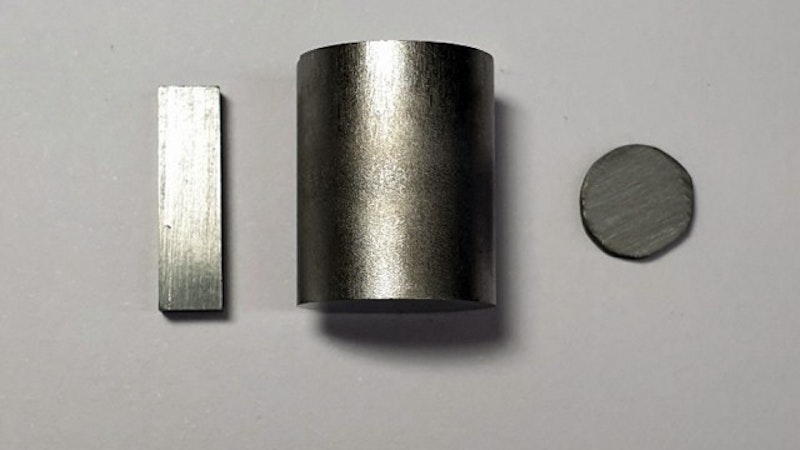 Perseverance, NASA's 2020 Mars rover, is powered by something very desirable here on Earth: a thermoelectric device, which converts heat to useful electricity. On Mars, the heat source is the radioactive decay of plutonium, and the device's conversion efficiency is 4-5%. That's good enough to power Perseverance and its operations but not quite good enough for applications on Earth.
A team of scientists from Northwestern University and Seoul National University in Korea now has demonstrated a high-performing thermoelectric material in a practical form that can be used in device development. The material — purified tin selenide in polycrystalline form — outperforms the single-crystal form in converting heat to electricity, making it the most efficient thermoelectric system on record. The researchers were able to achieve the high conversion rate after identifying and removing an oxidation problem that had degraded performance in earlier studies. For further information see the IDTechEx report on Thermoelectric Energy Harvesting and Other Zero-Emission Electricity from Heat 2022-2042.
The polycrystalline tin selenide could be developed for use in solid-state thermoelectric devices in a variety of industries, with potentially enormous energy savings. A key application target is capturing industrial waste heat — such as from power plants, the automobile industry and glass- and brick-making factories — and converting it to electricity. More than 65% of the energy produced globally from fossil fuels is lost as waste heat.
"Thermoelectric devices are in use, but only in niche applications, such as in the Mars rover," said Northwestern's Mercouri Kanatzidis, a chemist who specializes in the design of new materials. "These devices have not caught on like solar cells, and there are significant challenges to making good ones. We are focusing on developing a material that would be low cost and high performance and propel thermoelectric devices into more widespread application."
Thermoelectric devices are already well defined, says Kanatzidis, but what makes them work well or not is the thermoelectric material inside. One side of the device is hot and the other side cold. The thermoelectric material lies in the middle. Heat flows through the material, and some of the heat is converted to electricity, which leaves the device via wires. The material needs to have extremely low thermal conductivity while still retaining good electrical conductivity to be efficient at waste heat conversion. And because the heat source could be as high as 400-500 degrees Celsius, the material needs to be stable at very high temperatures. These challenges and others make thermoelectric devices more difficult to produce than solar cells.
In 2014, Kanatzidis and his team reported the discovery of a surprising material that was the best in the world at converting waste heat to useful electricity: the crystal form of the chemical compound tin selenide. While an important discovery, the single-crystal form is impractical for mass production because of its fragility and tendency to flake. Tin selenide in polycrystalline form, which is stronger and can be cut and shaped for applications, was needed, so the researchers turned to studying the material in that form. In an unpleasant surprise, they found the material's thermal conductivity was high, not the desirable low level found in the single-crystal form.
"We realized something diabolical was happening," Kanatzidis said. "The expectation was that tin selenide in polycrystalline form would not have high thermal conductivity, but it did. We had a problem."
Upon closer examination, the researchers discovered a skin of oxidized tin on the material. Heat flowed through the conductive skin, increasing the thermal conductivity, which is undesirable in a thermoelectric device.
After learning that the oxidation came from both the process itself and the starting materials, the Korean team found a way to remove the oxygen. The researchers then could produce tin selenide pellets with no oxygen, which they then tested.
The true thermal conductivity of the polycrystalline form was measured and found to be lower, as originally expected. Its performance as a thermoelectric device, converting heat to electricity, exceeded that of the single crystal form, making it the most efficient on record. The efficiency of waste heat conversion in thermoelectrics is reflected by its "figure of merit," a number called ZT. The higher the number, the better the conversion rate. The ZT of single-crystal tin selenide earlier was found to be approximately 2.2 to 2.6 at 913 Kelvin. In this new study, the researchers found the purified tin selenide in polycrystalline form had a ZT of approximately 3.1 at 783 Kelvin. Its thermal conductivity was ultralow, lower than the single-crystals.
"This opens the door for new devices to be built from polycrystalline tin selenide pellets and their applications explored," Kanatzidis said.
Northwestern owns the intellectual property for the tin selenide material. Potential areas of application for the thermoelectric material include the automobile industry (a significant amount of gasoline's potential energy goes out of a vehicle's tailpipe), heavy manufacturing industries (such as glass and brick making, refineries, coal- and gas-fired power plants) and places where large combustion engines operate continuously (such as in large ships and tankers).
Source and top image: Northwestern University