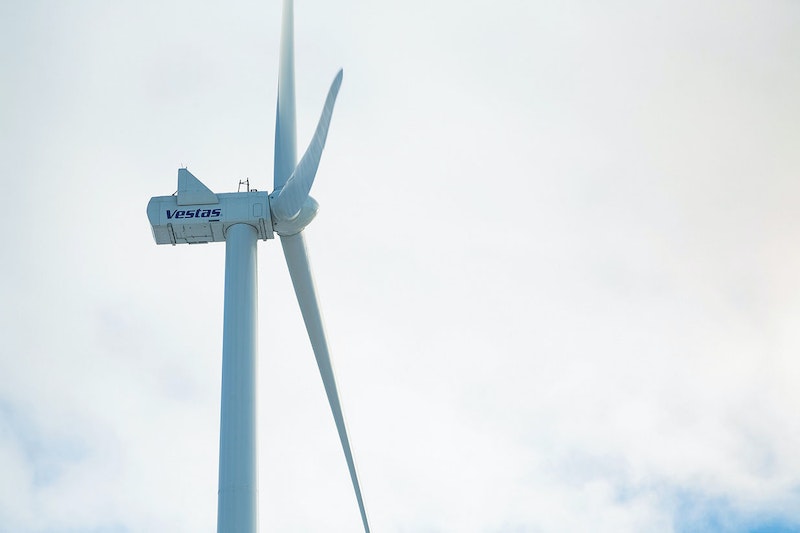 Dumat Al Jandal, the Middle East's largest wind farm and the first in the Kingdom of Saudi Arabia, is now connected to the grid and has produced its first carbon-free megawatt-hours (MWh) of energy.
The 400-megawatt (MW) utility-scale wind power project is being developed by a consortium led by EDF Renewables and Masdar, two of the world's leading renewable energy companies. The wind farm consists of 99 wind turbines from supplier and EPC contractor Vestas, each with a power output of 4.2 MW. Construction began in September 2019, and the wind turbine erection works are near completion. For more information see the IDTechEx report on Energy Harvesting Microwatt to Gigawatt: Opportunities 2020-2040.
When complete, the wind farm will generate carbon-free energy, powering up to 70,000 Saudi households, while saving 988,000 tonnes of CO₂ per year in support of the Kingdom's climate change mitigation goals.
Olivier Marchand, Project Director of Dumat Al Jandal Wind Co for Energy LLC stated: "We are delighted to start the early power production of this unique large-scale wind project in KSA - Dumat Al Jandal wind farm. The outstanding commitment shown by our teams and contractors with the implementation of the highest health and safety standards and the full support provided by the Saudi Arabia Ministry of Energy, Saudi Power Procurement Company (SPCC) and the Saudi Electricity Company (SEC) have contributed to the successful execution of the project during this extremely challenging pandemic period. We are now looking forward to successfully reaching, with our partners and contractors, the full commissioning of the project in the months to come."
Olivier Bordes, CEO of EDF Renewables Middle East, added: "It is an honor to contribute to the Kingdom's energy transition with the start of the production of Dumat Al Jandal wind farm, the most powerful in the Middle East. This major step clearly demonstrates our ability to deliver competitive, innovative, and low-carbon energy solutions and to support the Saudi Arabia's Vision 2030 aiming to reduce the country's carbon footprint. We are thriving to expand renewable energies in KSA and the GCC region to fight together the global climate change, in line with EDF's CAP 2030 strategy aiming to double its net installed capacity from 28 GW to 60 GW between 2015 and 2030."
Osama Al Othman, Country Representative, Saudi Arabia, Masdar, said: "Masdar is proud to be leveraging its experience in renewable energy to deliver the Kingdom of Saudi Arabia's first wind farm in collaboration with our partners. The successful connection of the project to the electricity transmission grid marks an important milestone for this landmark project in the Kingdom and we look forward to project's completion in the near future. As a global leader in the development of commercially viable wind power, Masdar is committed to advancing clean technology across the region and we will continue our efforts to support the country's ambitious energy program."
Muhamed Bou-Zeid, General Manager of Vestas Middle East and North Africa, continued: "With the full endorsement of the authorities and our partners in Saudi Arabia, we have been fortunate and privileged to contribute to the Kingdom's clean energy diversification strategy through the Dumat Al Jandal wind farm. While we continue to introduce our wind technology leadership in the region, we also strive to power the world with sustainable energy solutions by driving decarbonization and electrification beyond the power sector. The success of this agenda can only be realized through collaborative partnerships with an expansive vision and a common purpose, and which I can confidently say is a reality today in Saudi Arabia."
The wind farm is also contributing to the region's economic activity, creating more than 600 local jobs during the construction phase. The project has also achieved a significant health and safety milestone by securing 1.8 million man-hours without a single lost-time injury (LTI) as a result of the strict health and safety procedures on site.
The Dumat Al Jandal wind farm will supply electricity under a 20-year power purchase agreement (PPA) with the Saudi Power Procurement Company, a subsidiary of the Saudi Electricity Company (SEC), the Saudi power generation and distribution company.
Source and top image: Masdar