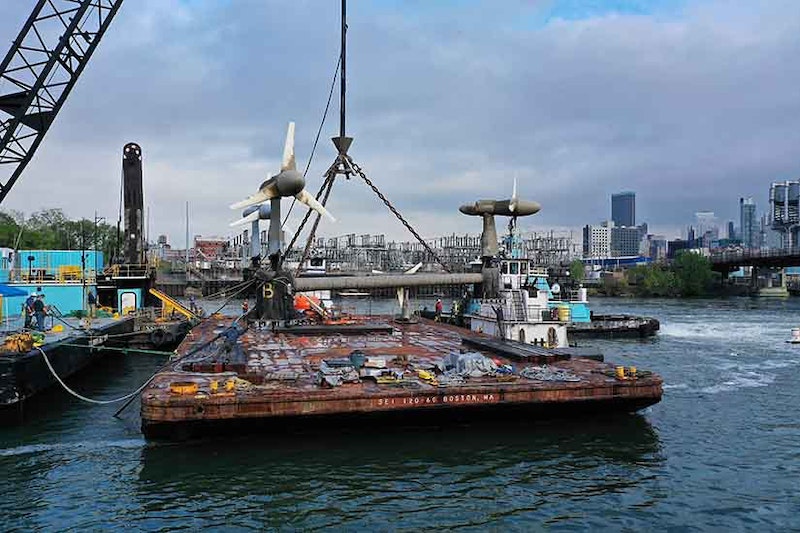 National Renewable Energy Laboratory (NREL) researchers have been exploring the use of thermoplastic composite materials for wind turbines for several years, but they have only just begun to scrape the surface of how these materials perform underwater. For the first time in history, thermoplastic composite blades, which have the potential to revolutionize the marine energy industry, are being tested on a large-scale tidal power turbine.
Previous laboratory-scale research performed at Institut Français de Recherche pour l'Exploitation de la Mer (IFREMER) demonstrated how thermoplastic materials can improve fatigue performance, decreasing the probability for catastrophic blade failures and making tidal turbine blades more sustainable for marine energy applications. The manufacturing process is also faster and more energy efficient. Additionally, thermoplastics, which make up about 75% of worldwide plastic production, can be recycled because the plastic polymer material can be remolded at high temperatures and resolidifies upon cooling. For further information see the IDTechEx report on Wave, Tidal and Hydro Power 1W-10MW 2018-2038.
Thanks to funding from the US Department of Energy's Water Power Technologies Office and a collaboration with Verdant Power, NREL researchers have constructed turbine blades using thermoplastic composite materials and are now testing them on one of Verdant Power's tidal turbines, which are currently deployed in New York City's East River.
Evaluation of the loads and performance of the turbines at the Roosevelt Island Tidal Energy (RITE) project site in New York began in October 2020 with the installation of Verdant Power's TriFrame mount, which holds three tidal turbines. Because of strong tidal currents that change direction multiple times per day, the East River is an ideal location for testing and validating the performance of marine energy turbines. Both the TriFrame and three-bladed turbines were designed to be modular and scalable, allowing researchers to study the 5-meter (m)-diameter turbines and then scale them up to the more economically viable 10- to 15-m-class turbine systems that are more likely to be used in the field.
During their first 6 months in the water, the tidal turbines, whichinitially had epoxy blades, generated almost 200 megawatt-hours of energy—a U.S. record for marine energy production. After a 6-month deployment, in May 2021, the Verdant Power team performed a retrieve-and-replace (R&R) operation, swapping out one of the epoxy-bladed rotors with a new, NREL-manufactured rotor with thermoplastic blades that are identical to the original epoxy blades except for their material.
For several months prior to the R&R deployment, NREL Research Engineer Robynne Murray and her team have been tapping into the manufacturing and materials characterization capabilities at NREL's Composites Manufacturing Education and Technology (CoMET) facility. There, they built the 2.5-m blades using a vacuum infusion method with Elium thermoplastic resin. They then worked to confirm that these blades had similar structural performance to the traditional epoxy resin blades prior to deployment, structurally validating the full-scale, thermoplastic, tidal power turbine blades that are now generating power in the East River. After its trial run ends and the blades are retrieved by the end of 2021, the team will measure the blades' structural response to applied loads to quantify the impact of seawater on these materials.
"Verdant Power provided the NREL team with the blade tooling and geometry details so we could produce thermoplastic blades that are identical to the epoxy blades that they've already manufactured, which allows us to do a side-by-side comparison with traditional materials," Murray said. "We're really interested in using these thermoplastic materials because they could potentially prolong the life of the blades and have improved structural properties for marine applications."
An NREL-built data acquisition system sits inside the tail cone of the newly installed tidal turbine, allowing researchers to measure the strain and angular position of the thermoplastic blades while in action in the East River. The data acquisition system design and validation process, which included submerging the system in water for several days, meets several requirements, including the ability to continuously and reliably acquire, measure, and store all the data generated during the turbine's entire deployment period—estimated to be up to 28 gigabytes.
"This work will demonstrate a potentially game-changing material for marine applications at a meaningful scale," Murray said. "It will also produce strain and acceleration data for full-scale turbines that we can use to validate design tools and derisk future deployments, industrywide. The collaboration with Verdant Power and the ability to join their innovative R&R operation has been key to obtaining these data that will benefit the marine energy industry for years to come."
Since the May 2021 R&R, NREL's tidal turbine has been producing power for New York City's electric grid and even experienced some of the highest loads the blades will see during the deployment. That data will be particularly useful in examining how these turbines perform during the most extreme conditions, adding key information to the growing understanding of operational turbine limits and saturated thermoplastic materials and their promise to resolve tomorrow's marine energy challenges.
This summer, the Pacific Northwest National Laboratory will be performing a survey of the TriFrame's flow speeds at the RITE Project site to obtain flow data for the operational tidal turbines. These data will be used to validate flow velocity models, which will be publicly accessible to the marine energy industry.
Until its deployment ends, the NREL team watches and waits while their thermoplastic blades help generate tidal energy at scale for the first time.
Source and top image: NREL