Technology That Can Double The Power Harvested From Ocean Waves 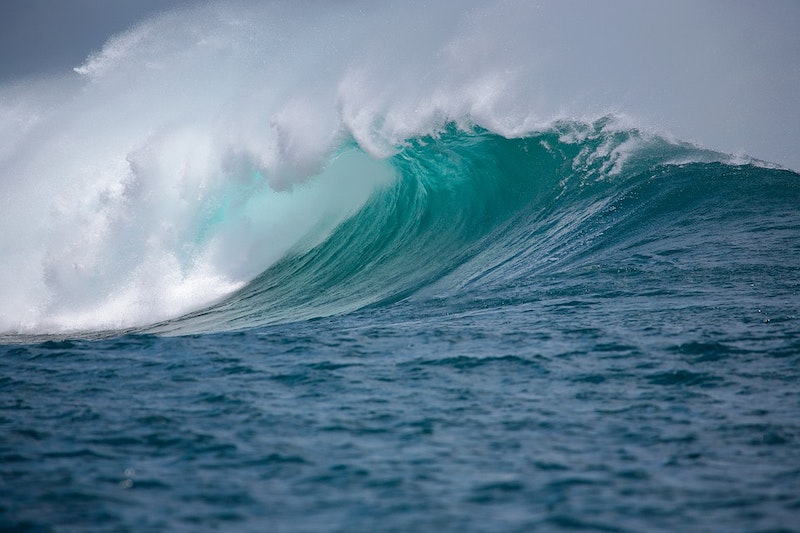 The untapped potential of ocean wave energy is vast - it has been estimated that the power of coastal waves around the world each year is equivalent to annual global electricity production. With over 35,000 km of coastline, Australia is ideally placed to tap into this power source. Analysis shows Australia could produce twice its current electricity output by harvesting just 17% of its wave energy. But the challenges of developing technologies that can efficiently extract that natural power and withstand the harsh ocean environment have kept wave energy stuck at experimental stage.
Now a research team led by RMIT University has created a wave energy converter that is twice as efficient at harvesting power as any similar technologies developed to date. The innovation, published in the journal Applied Energy, relies on a world-first, dual-turbine design. For further information see the IDTechEx report on Wave, Tidal and Hydro Power 1W-10MW 2018-2038.
Lead researcher Professor Xu Wang said wave energy was one of the most promising sources of clean, reliable and renewable power. "While wind and solar dominate the renewable market, they are available only 20-30% of the time," Wang said. "Wave energy is available 90% of the time on average and the potential power contained in offshore waves is immense. Our prototype technology overcomes some of the key technical challenges that have been holding back the wave energy industry from large-scale deployment. With further development, we hope this technology could be the foundation for a thriving new renewable energy industry delivering massive environmental and economic benefits." 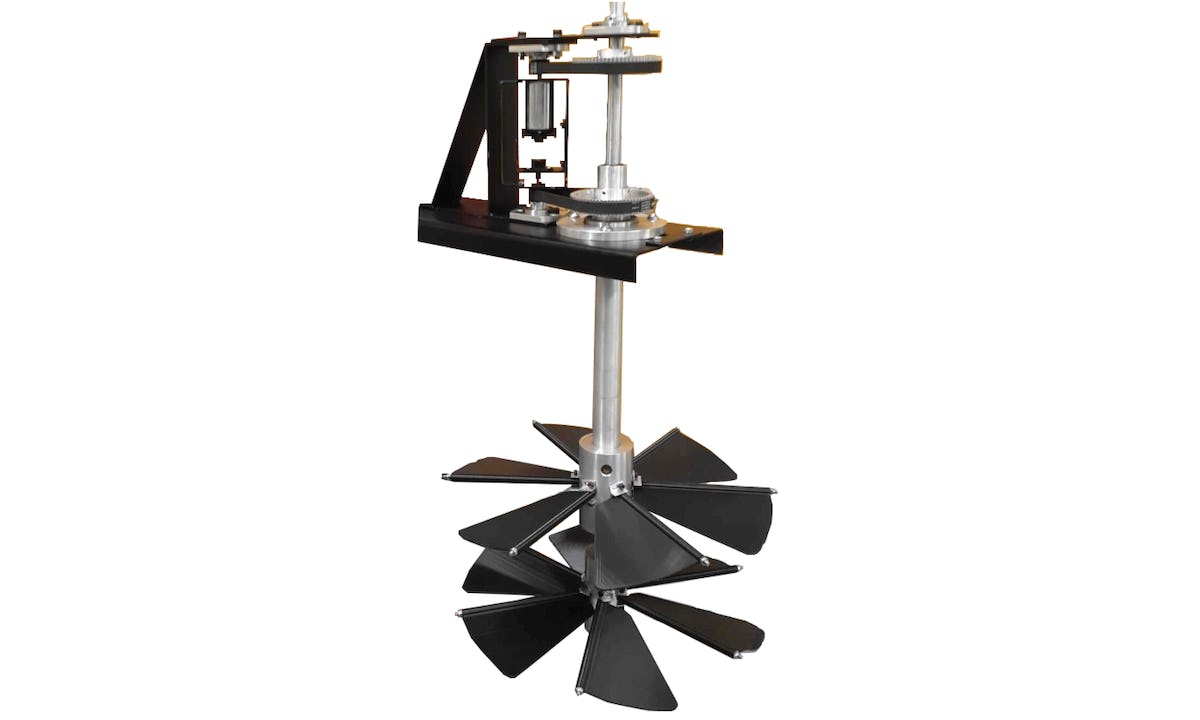 How the wave energy convertor works

One of the most popular experimental approaches is to harvest wave energy through a buoy-type converter known as a "point absorber", which is ideal for offshore locations. This technology, which harvests energy from the up and down movement of waves, is generally cost-effective to manufacture and install. But it needs to be precisely synchronized with incoming wave movement to efficiently harvest the energy. This usually involves an array of sensors, actuators and control processors, adding complexity to the system that can cause underperformance, as well as reliability and maintenance issues.
The RMIT-created prototype needs no special synching tech, as the device naturally floats up and down with the swell of the wave.
"By always staying in sync with the movement of the waves, we can maximise the energy that's harvested," Wang said. "Combined with our unique counter-rotating dual turbine wheels, this prototype can double the output power harvested from ocean waves, compared with other experimental point absorber technologies."
The simple and economical device has been developed by RMIT engineering researchers in collaboration with researchers from Beihang University in China.
Two turbine wheels, which are stacked on top of each other and rotate in opposite directions, are connected to a generator through shafts and a belt-pulley driven transmission system. The generator is placed inside a buoy above the waterline to keep it out of corrosive seawater and extend the lifespan of the device. 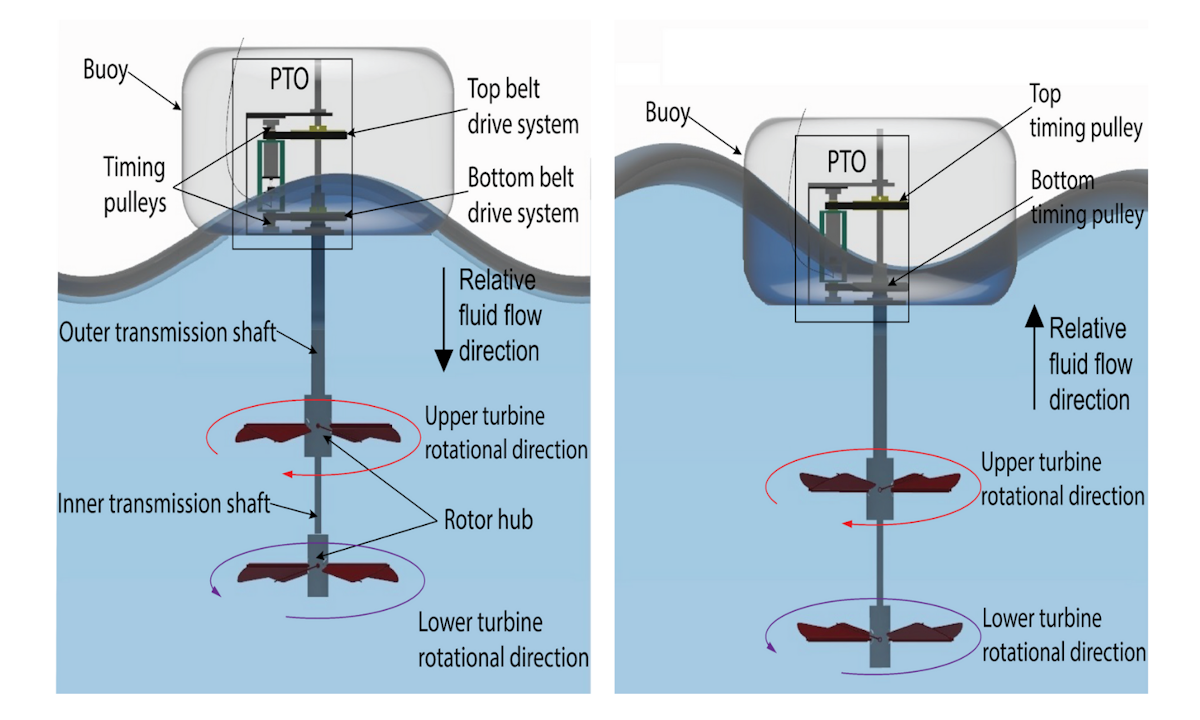 The prototype has been successfully tested at lab scale and the research team is keen to collaborate with industry partners to test a full-scale model, and work towards commercial viability.
"We know it works in our labs, so the next steps are to scale this technology up and test it in a tank or in real-life ocean conditions," Wang said. "Tapping into our wave energy resource could not only help us cut carbon emissions and create new green energy jobs, it also has great potential for addressing other environmental problems. For example, as the frequency of drought increases, wave energy could be used to power carbon-neutral desalination plants and supply fresh water for the agriculture industry - a smart adaptation to the challenge of a changing climate."
Source: RMIT University
Top image: Pixabay

Considering the open space available in the ocean, and the tremendous amount of energy it produces, wave power could be a viable source of efficient renewable energy. #WaveEnergy.