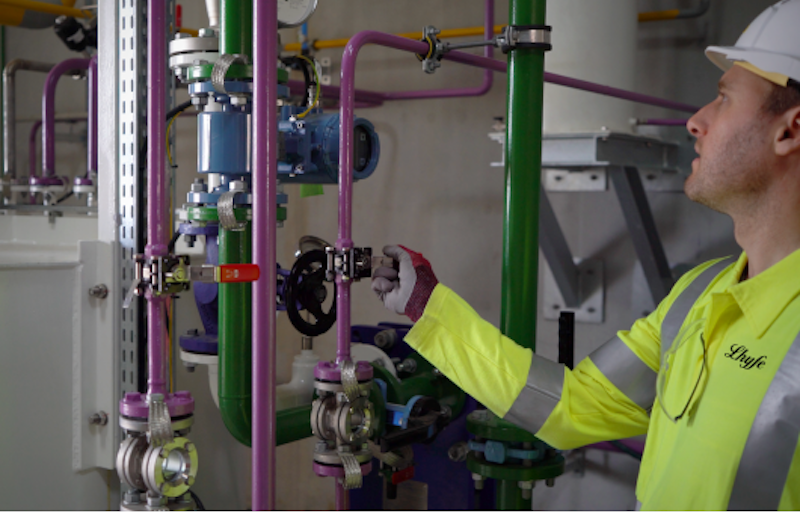 Renewable hydrogen produced directly from wind power becomes reality. At the end of August, just a year after the foundation stone was laid for this industrial facility, Lhyfe began producing its first hundred kilograms of ecological hydrogen and is ready for industrial scale production.
Following a few days of testing at this first site, for which the foundation stone was laid only a year ago in Bouin (Vendée, France), Lhyfe has produced 627 kilograms of renewable hydrogen, using an electrolyser powered by wind turbines a few meters away. For more information see the IDTechEx report on The Hydrogen Economy, Fuel Cells and Hydrogen Production Methods.
The purpose of this initial production was to finalize tests, before the end of September when industrial production and sales will start for new partners whose names will be revealed soon. Lhyfe will henceforth produce 300 kilograms of renewable hydrogen a day, before ramping up to a tonne a day in the coming months.
This industrial production facility for renewable hydrogen, connected directly to a wind farm, is a unique technical achievement and the first of its kind in the world. This site is fully in line with the acceleration of hydrogen deployment around the world and in the strategic plans of a growing number of countries.
Source and top image: Nouvelles Graines

Refrigerated Warehouses May Soon be Storing More Than Food
New Efficiency Record for Solar Cells
Join the Upcoming Webinar: Future of Hydrogels Beyond Medical
Windows That Outsmart the Elements