Agreement for Production of Floaters for the EWP EDF One Project 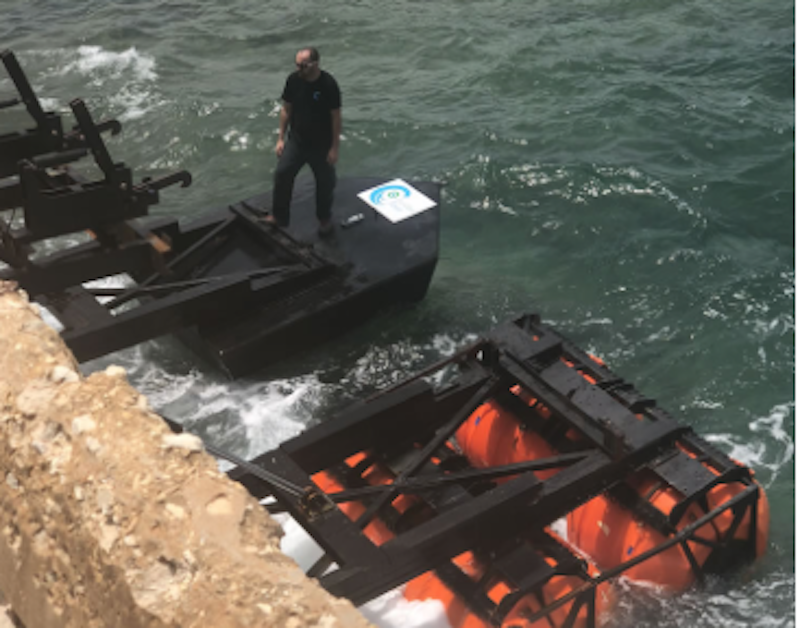 Publicly traded wave energy developer, Eco Wave Power Global AB announces today that a collaboration agreement was signed with the publicly traded company Lesico Ltd for the production of 8 floaters for the EWP EDF One project in Israel, through its subsidiary EDF EWP One Ltd. Lesico, which was founded in 1969, has more than 52 years of experience in providing engineering and construction, operation and maintenance services for infrastructure projects and is involved in the research and development of clean-tech technologies in the fields of water and desalination.
EWP EDF One project, which is co-funded by the Israeli Ministry of Energy, will include the construction and installation of ten floaters on 30 linear meters of a pre-existing breakwater within the port of Jaffa, Israel, with an installed capacity of 100 kW. For further information see the IDTechEx report on Wave, Tidal and Hydro Power 1W-10MW 2018-2038.
So far, Eco Wave Power has finalized the breakwater's reinforcement works, the assembly and installation of the energy conversion unit and the production of two sample floater mechanisms in Ukraine. Now, following the newly entered collaboration agreement, Lesico will take an integral part in the EWP EDF One project, by providing the 8 remaining floater mechanisms within 51 working days. Once all units are provided and installed, the parties will review the possibility of using Lesico for additional projects planned by Eco Wave Power.
Eran Sidi, Chief Operating Officer of Lesico, stated: "Our company has significant experience in working with cleantech technologies in the water and desalination sectors. As a result, we believe that we will have a significant added value in the production of the floater mechanisms for Eco Wave Power. In addition, Lesico has a mission of taking part in the provision of services for innovative renewable energy sources, which will assist the global fight against climate change. As a result, we feel that we are taking an important role through our participation in the first grid connected wave energy project in Israel, while adding a new market segment to Lesico's portfolio."
Inna Braverman, Founder and Chief Executive Officer of Eco Wave Power stated: "We are very pleased to announce our collaboration with Lesico, which is a top tier expert in providing construction, operation and maintenance services for the infrastructure sector in Israel and abroad. We believe that such collaboration will shorten the production time for our remaining 8 floater mechanisms, while ensuring high production quality, which could be expanded to additional projects around the globe."
About Lesico
The Company was incorporated lawfully in Israel on February 19, 1969, as a private company limited by shares. Following the issuance of the Company's shares to the public and their listing for trading on the Tel Aviv Stock Exchange on May 25, 2017, the Company became a public company within the meaning of the term in the Companies Law, -1999 ("the Companies Law"). The Company, itself and through subsidiaries, specializes in the construction of various infrastructure projects. In the framework of two operating segments: the construction segment and the maintenance segment
A. Segment of projects under construction - in this area the Group operates in the following areas:
(1) Civil engineering infrastructure.
(2) Railway infrastructure.
(3) Pipeline and energy infrastructures.
(4) clean piping infrastructure.
(5) environmental infrastructure.
B. Maintenance and Franchising Segment - In this area the Group operates in the following activities:
(1) Maintenance and service of municipal infrastructures.
(2) maintenance and service in energy facilities.
(3) Concessions for projects using BOT and other methods.
About Eco Wave Power Global AB
Eco Wave Power Global ("Eco Wave Power") is a leading onshore wave energy technology company that developed a patented, smart and cost-efficient technology for turning ocean and sea waves into green electricity. Eco Wave Power's mission is to assist in the fight against climate change by enabling commercial power production from ocean and sea waves. Eco Wave Power is recognized as a "Pioneering Technology" by the Israeli Ministry of Energy and was labeled as an "Efficient Solution" by the Solar Impulse Foundation. Eco Wave Power's project in Gibraltar has received funding from the European Union Regional Development Fund and the European Commission's Horizon 2020 framework program. The company has also received the "Global Climate Action Award" from the United Nations. Eco Wave Power's common shares (ECOWVE) are traded on Nasdaq First North and its ADSs (WAVE) are traded on the Nasdaq Capital Market.
Read more about Eco Wave Power at: www.ecowavepower.com