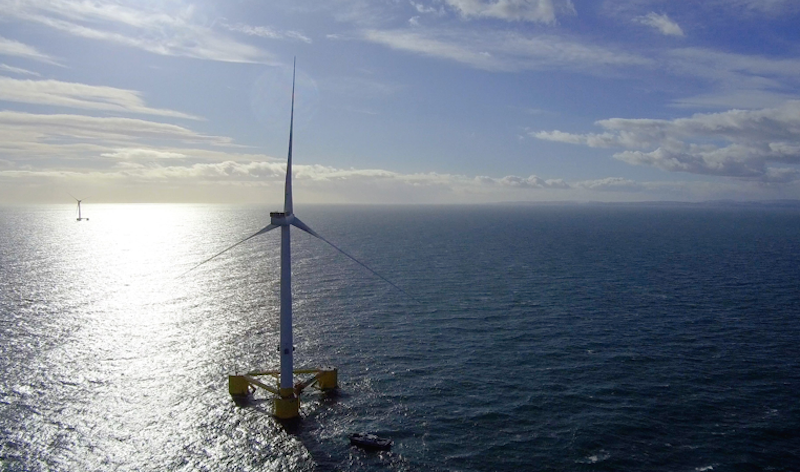 The world's largest floating windfarm is now fully commissioned and delivering green electricity to Scotland's grid.
The 50 MW Kincardine Offshore Windfarm is located 15 km off the coast of Aberdeenshire, in water depths ranging from 60m to 80m. The project consists of five Vestas V164-9.5 MW and one V80-2 MW turbine, each installed on WindFloat® semi-submersible platforms designed by Principle Power.
The Kincardine project was started back in 2014 by Allan MacAskill and Lord Nicol Stephen, now both directors of Flotation Energy plc. In 2016 Cobra Group became the main investor in Kincardine Offshore Windfarm Ltd. (KOWL) Cobra Wind, a subsidiary of Cobra Group, has been responsible for delivery of the project, including engineering, construction, installation and commissioning. For further information see the IDTechEx report on Energy Harvesting Microwatt to Gigawatt: Opportunities 2020-2040.
Cobra's Senior Manager, Jose Antonio Fernández, said "The Kincardine project is not only the world's largest. It has also been a fantastic foundation for other joint venture projects between Cobra and Flotation Energy. Our Round 4 success with the 480MW Morecambe project, our 7GW of bids into the Scotwind leasing round and our White Cross 100MW floating project in the South West are all signs of our confidence in Scotland and the UK Floating wind is set for massive growth in the future - and we want to do more."
In addition to being the largest floating windfarm in the world, the development also features another first, using the highest capacity wind turbines ever installed on floating platforms. Kincardine will generate over 200 GWh of green electricity a year, enough renewable electricity to power more than 50.000 Scottish households.
Jaime Altolaguirre, KOWL Project Director from Cobra, said: "The completion of Kincardine comes at a pivotal time in determining Scotland's leadership in the floating offshore sector. Kincardine offshore windfarm has shown that the largest and most advanced wind turbines available can be installed on floating platforms in the challenging North Sea environment. The project proves that floating wind can play a vital role in tackling climate change not only in Scotland and the UK, but also around the world."
The Kincardine team has also announced the selection of Aberdeen as its operations and maintenance base.
Jaime Altolaguirre continued saying: "Our local team, managed by Cobra, will be responsible for the day-to-day operations of the project. We will be using Scottish based companies with proven North Sea capabilities, drawing on their experience maintaining offshore semi submersibles and platforms over the last 50 years. It could not be a better fit."
Aaron Smith, Chief Commercial Officer, Principle Power, said: "Kincardine is further showing the readiness and commercial potential of floating technology. With eighty percent of the world's offshore wind resources in deep water areas, floating technologies like the WindFloat® open several new geographies to harness the boundless supply of clean energy contained therein. The UK has led the way in realising the potential of floating wind and is now recognised globally as a key market for floating wind developments. Kincardine demonstrates the readiness of floating wind to support the government's net zero ambitions ahead of the forthcoming lease awards in ScotWind, floating wind leasing rounds managed by Crown Estate Scotland."
Nils de Baar, President, Vestas Central & Northern Europe, said: "The Kincardine project shows how boundaries of offshore wind technology are constantly being pushed forward. We have once again demonstrated that the world's most powerful turbines can be installed on floating substructures. We stand ready for the next phase of commercial scale floating offshore wind. With appropriate policy and regulations, floating technology offers the UK an opportunity to expand its global leadership position in offshore wind and build further opportunities for the domestic supply chain. We are proud to be part of the pioneering Kincardine project."
Source and top image: Principle Power