Researchers at the Bristol Robotics Laboratory are working on an autonomous robot, dubbed EcoBot III. The main objective of this project was to develop a robot with onboard fluid circulation, capable of collecting its energy from the environment and getting rid of its own waste. Also, because of the scarcity of onboard energy, the team was required to develop ultra low power electronic circuitry to operate the robot.
One goal of the work is to build energetically autonomous robots. For this, Microbial Fuel Cell (MFC) technology is employed to extract electrical energy from refined foods such as sugar and unrefined foods such as insects and fruit. This is achieved by extracting electrons from the microbial metabolic processes. To be truly autonomous, robots will be required to incorporate in their behavioural repertoire actions that involve searching, collecting and digesting food. The robot will be designed to remain inactive until sufficient energy has been generated to complete its next task.
So far, two such robots, namely EcoBot-I and EcoBot-II have been developed, which to some extent exhibit this type of behaviour. EcoBot-I, which was developed in 2002, employed E. coli and was fed with sugar and EcoBot -II, which was developed in 2004 used sludge microbes and was fed (amongst other substrates) with dead insects and food waste. This project, using the same MFC technology, is also looking into underwater autonomy based on artificial gills for robots. 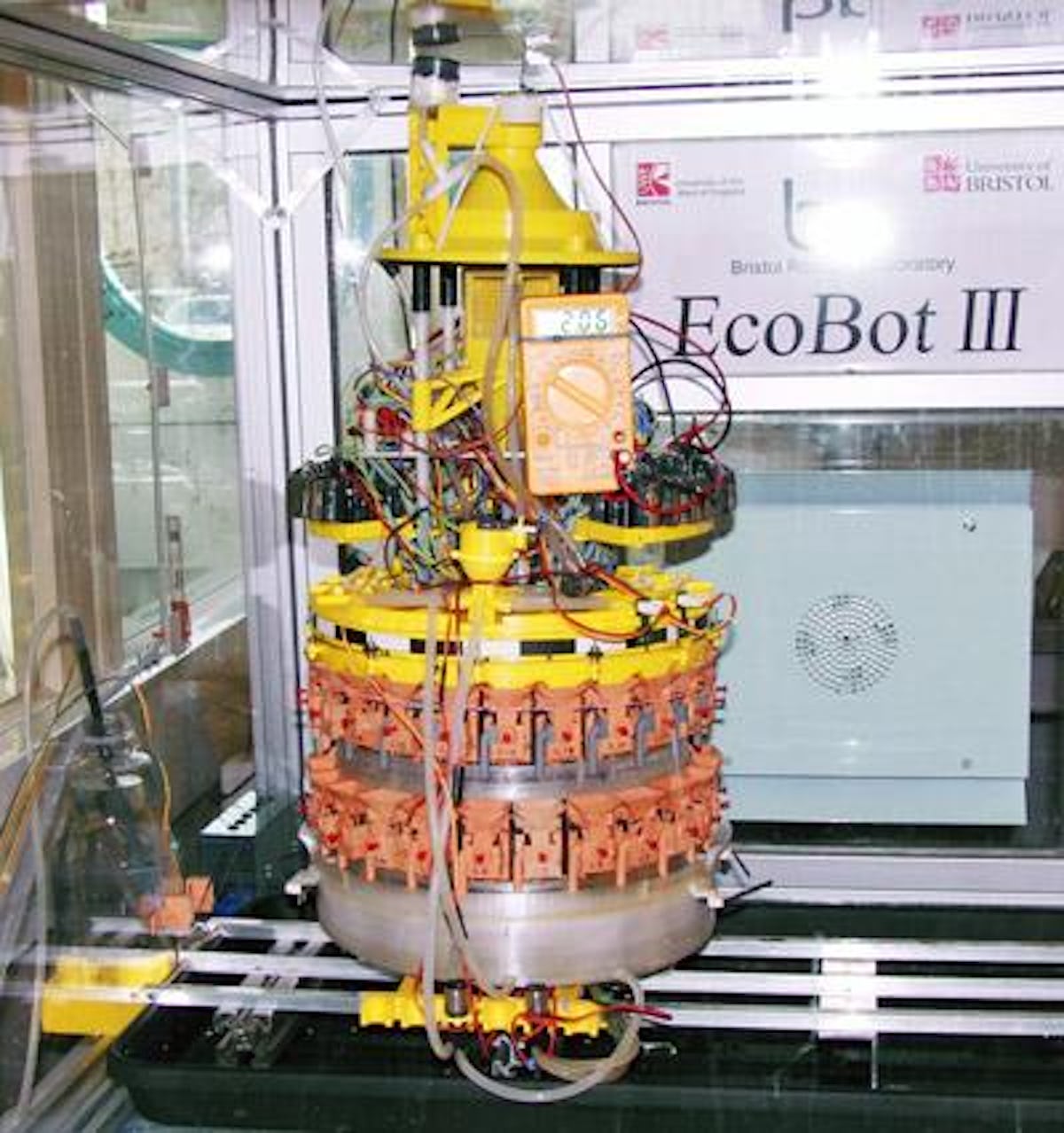 Researchers at Bristol Robotics Laboratory are also collaborating with the University of the West of England and Dr Ioannis Ieropolous to look into the use of urine as the 'fuel' for Microbial Fuel Cells (MFCs), which use bacterial cultures to break down 'food' to create power.
An EPSRC Career Acceleration Fellowship Grant worth £564,561 has been awarded to Dr Ioannis Ieropoulos for a four year project to develop research into how waste could be used by Microbial Fuel Cells to generate energy. The research team will work on scaling up the MFCs so that they can work together in a 'stack' - a series of cells which are connected both electrically and in terms of the liquid feed-lines under a continuous flow system. A stack of linked MFCs will be much more efficient and produce more energy than the same number of individual MFCs.
A unique aspect of their research will be to look at the use of urine as a waste material that could be used to power the MFCs. Dr Ieropoulos explains, "Over the years we have fed our MFCs with rotten fruit, grass clippings, prawn shells and dead flies in an attempt to investigate different waste materials to use as a 'food source' for the Microbial Fuel Cells. We have focused on finding the best waste materials that create the most energy. Urine is chemically very active, rich in nitrogen and has compounds such as urea, chloride, potassium and bilirubin, which make it very good for the microbial fuel cells. We have already done preliminary tests which show it being a waste material that is very effective. Although it is early days for this research, we hope to work towards producing a prototype portable urinal which would use urine to create power from fuel cells. We envisage that this could be used for example at music festivals and other outdoor events."
The researchers are already in touch with a waterless urinal company who have seen the potential of the technology. A further aspect of the EPSRC funded project is to develop the cathode side of the MFC so that the whole cell becomes self sustaining. Each MFC has an anode side and a cathode side which together as two half-cells complete the system to create power. Commonly bacteria are in the anode side, and chemicals or oxygen are in the cathode side, which complete the reactions (i.e. close the circuit). This research will develop the use of oxygen-producing organisms (such as algae) instead of chemicals in the cathode side of the MFC, thus moving towards a self-sustaining system - the waste from the algae can - for example - be used to feed the bacteria in the anode side, i.e. using its own waste to produce energy.
The project builds on the success of the EcoBots I, II and III research carried out by Dr Ieropoulos, Professor John Greenman and Professor Chris Melhuish, together with technical support from Ian Horsfield and other members of the BRL team.
Source: Bristol Robotics Laboratory and University of the West of England
Images of EcoBot III source: Bristol Robotics Laboratory
For more read : Energy Harvesting and Storage for Electronic Devices 2010-2020
and attend Wireless Sensor Networks, Energy Harvesting and RFID in Asia
Energy Harvesting & Storage and Wireless Networks & RTLS USA 2010