An Energy Storage Solution That Flows Like Soft-Serve Ice Cream 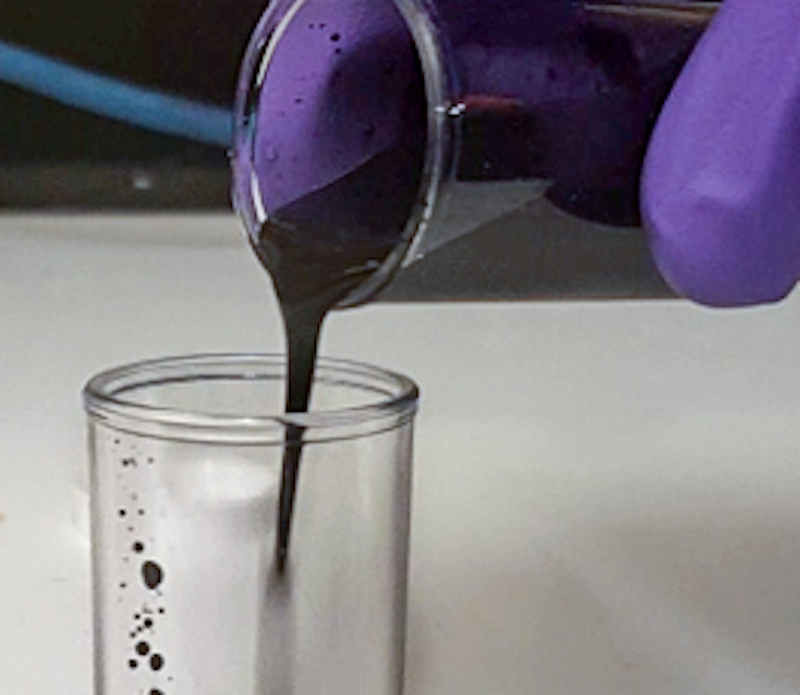 Batteries made from an electrically conductive mixture the consistency of molasses could help solve a critical piece of the decarbonization puzzle. An interdisciplinary team from MIT has found that an electrochemical technology called a semisolid flow battery can be a cost-competitive form of energy storage and backup for variable renewable energy (VRE) sources such as wind and solar. The group's research is described in a paper published in Joule.
"The transition to clean energy requires energy storage systems of different durations for when the sun isn't shining and the wind isn't blowing," says Emre Gençer, a research scientist with the MIT Energy Initiative (MITEI) and a member of the team. "Our work demonstrates that a semisolid flow battery could be a lifesaving as well as economical option when these VRE sources can't generate power for a day or longer — in the case of natural disasters, for instance."
The rechargeable zinc-manganese dioxide (Zn-MnO2) battery the researchers created beat out other long-duration energy storage contenders ."We performed a comprehensive, bottom-up analysis to understand how the battery's composition affects performance and cost, looking at all the trade-offs," says Thaneer Malai Narayanan SM '18, PhD '21. "We showed that our system can be cheaper than others, and can be scaled up." For further information see the IDTechEx report on Redox Flow Batteries 2021-2031.
Narayanan, who conducted this work at MIT as part of his doctorate in mechanical engineering, is the lead author of the paper. Additional authors include Gençer, Yunguang Zhu, a postdoc in the MIT Electrochemical Energy Lab; Gareth McKinley, the School of Engineering Professor of Teaching Innovation and professor of mechanical engineering at MIT; and Yang Shao-Horn, the JR East Professor of Engineering, a professor of mechanical engineering and of materials science and engineering, and a member of the Research Laboratory of Electronics (RLE), who directs the MIT Electrochemical Energy Lab.

Going with the flow

In 2016, Narayanan began his graduate studies, joining the Electrochemical Energy Lab, a hotbed of research and exploration of solutions to mitigate climate change, which is centered on innovative battery chemistry and decarbonizing fuels and chemicals. One exciting opportunity for the lab: developing low- and no-carbon backup energy systems suitable for grid-scale needs when VRE generation flags.
While the lab cast a wide net, investigating energy conversion and storage using solid oxide fuel cells, lithium-ion batteries, and metal-air batteries, among others, Narayanan took a particular interest in flow batteries. In these systems, two different chemical (electrolyte) solutions with either negative or positive ions are pumped from separate tanks, meeting across a membrane (called the stack). Here, the ion streams react, converting electrical energy to chemical energy — in effect, charging the battery. When there is demand for this stored energy, the solution gets pumped back to the stack to convert chemical energy into electrical energy again.
The duration of time that flow batteries can discharge, releasing the stored electricity, is determined by the volume of positively and negatively charged electrolyte solutions streaming through the stack. In theory, as long as these solutions keep flowing, reacting, and converting the chemical energy to electrical energy, the battery systems can provide electricity.
"For backup lasting more than a day, the architecture of flow batteries suggests they can be a cheap option," says Narayanan. "You recharge the solution in the tanks from sun and wind power sources." This renders the entire system carbon free.
But while the promise of flow battery technologies has beckoned for at least a decade, the uneven performance and expense of materials required for these battery systems has slowed their implementation. So, Narayanan set out on an ambitious journey: to design and build a flow battery that could back up VRE systems for a day or more, storing and discharging energy with the same or greater efficiency than backup rivals; and to determine, through rigorous cost analysis, whether such a system could prove economically viable as a long-duration energy option.

To attack this multipronged challenge, Narayanan's project brought together, in his words, "three giants, scientists all well-known in their fields": Shao-Horn, who specializes in chemical physics and electrochemical science, and design of materials; Gençer, who creates detailed economic models of emergent energy systems at MITEI; and McKinley, an expert in rheology, the physics of flow. These three also served as his thesis advisors.
"I was excited to work in such an interdisciplinary team, which offered a unique opportunity to create a novel battery architecture by designing charge transfer and ion transport within flowable semi-solid electrodes, and to guide battery engineering using techno-economics of such flowable batteries," says Shao-Horn.
While other flow battery systems in contention, such as the vanadium redox flow battery, offer the storage capacity and energy density to back up megawatt and larger power systems, they depend on expensive chemical ingredients that make them bad bets for long duration purposes. Narayanan was on the hunt for less-pricey chemical components that also feature rich energy potential.
Through a series of bench experiments, the researchers came up with a novel electrode (electrical conductor) for the battery system: a mixture containing dispersed manganese dioxide (MnO2) particles, shot through with an electrically conductive additive, carbon black. This compound reacts with a conductive zinc solution or zinc plate at the stack, enabling efficient electrochemical energy conversion. The fluid properties of this battery are far removed from the watery solutions used by other flow batteries.
"It's a semisolid — a slurry," says Narayanan. "Like thick, black paint, or perhaps a soft-serve ice cream," suggests McKinley. The carbon black adds the pigment and the electric punch. To arrive at the optimal electrochemical mix, the researchers tweaked their formula many times.
"These systems have to be able to flow under reasonable pressures, but also have a weak yield stress so that the active MnO2 particles don't sink to the bottom of the flow tanks when the system isn't being used, as well as not separate into a battery/oily clear fluid phase and a dense paste of carbon particles and MnO2," says McKinley.
This series of experiments informed the technoeconomic analysis. By "connecting the dots between composition, performance, and cost," says Narayanan, he and Gençer were able to make system-level cost and efficiency calculations for the Zn-MnO2 battery.
"Assessing the cost and performance of early technologies is very difficult, and this was an example of how to develop a standard method to help researchers at MIT and elsewhere," says Gençer. "One message here is that when you include the cost analysis at the development stage of your experimental work, you get an important early understanding of your project's cost implications."
In their final round of studies, Gençer and Narayanan compared the Zn-MnO2 battery to a set of equivalent electrochemical battery and hydrogen backup systems, looking at the capital costs of running them at durations of eight, 24, and 72 hours. Their findings surprised them: For battery discharges longer than a day, their semisolid flow battery beat out lithium-ion batteries and vanadium redox flow batteries. This was true even when factoring in the heavy expense of pumping the MnO2 slurry from tank to stack. "I was skeptical, and not expecting this battery would be competitive, but once I did the cost calculation, it was plausible," says Gençer.
But carbon-free battery backup is a very Goldilocks-like business: Different situations require different-duration solutions, whether an anticipated overnight loss of solar power, or a longer-term, climate-based disruption in the grid. "Lithium-ion is great for backup of eight hours and under, but the materials are too expensive for longer periods," says Gençer. "Hydrogen is super expensive for very short durations, and good for very long durations, and we will need all of them." This means it makes sense to continue working on the Zn-MnO2 system to see where it might fit in.
"The next step is to take our battery system and build it up," says Narayanan, who is working now as a battery engineer. "Our research also points the way to other chemistries that could be developed under the semi-solid flow battery platform, so we could be seeing this kind of technology used for energy storage in our lifetimes."
This research was supported by Eni S.p.A. through MITEI. Thaneer Malai Narayanan received an Eni-sponsored MIT Energy Fellowship during his work on the project.
Source and top image: MIT