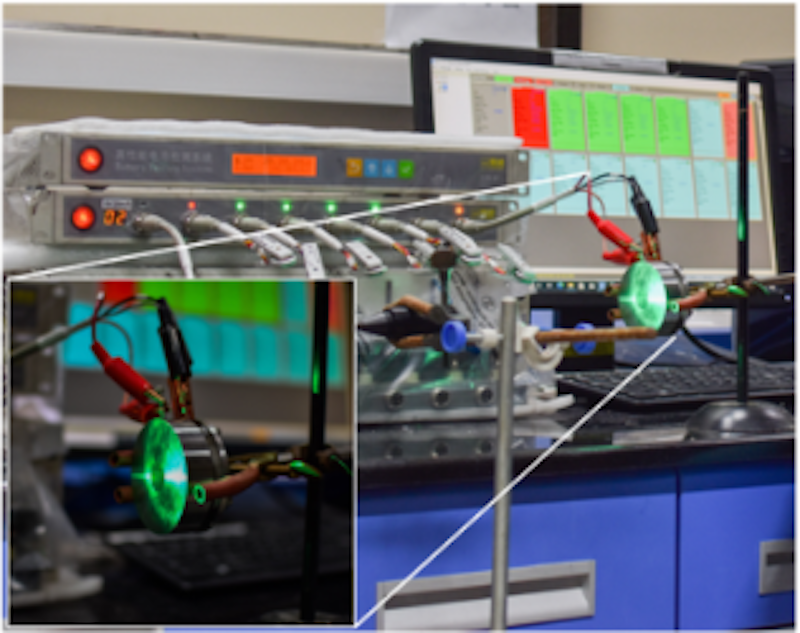 Secondary batteries, such as lithium ion batteries, need to be recharged once the stored energy is used up. In a bid to decrease our dependence on fossil fuels, scientists have been exploring sustainable ways to recharge secondary batteries. Recently, Amar Kumar (graduate student at T. N. Narayanan's lab in TIFR Hyderabad) and his colleagues have assembled a compact lithium ion battery with photosensitive materials that can be directly recharged with solar energy.
Initial efforts to channel solar energy to recharge batteries employed the use of photovoltaic cells and batteries as separate entities. Solar energy is converted by photovoltaic cells into electrical energy that is consequently stored as chemical energy in batteries. The energy stored in these batteries is then used to power the electronic devices. This relay of energy from one component to the other, for example, from the photovoltaic cell to the battery, leads to some loss in energy. To prevent energy loss, there was a shift towards exploring the use of photosensitive components inside a battery itself. There has been substantial progress in integrating photosensitive components within a battery resulting in the formation of more compact solar batteries. For further information see the IDTechEx report on Advanced Li-ion and Beyond Lithium Batteries 2022-2032: Technologies, Players, Trends, Markets.
Though improved in design, existing solar batteries still have some drawbacks. A few of these disadvantages associated with various types of solar batteries include: decreased ability to harness enough solar energy, use of organic electrolyte that may corrode the photosensitive organic component inside a battery, and formation of side products that hinder sustained performance of a battery in the long term.
In this study, Amar Kumar decided to explore new photosensitive materials which can also incorporate lithium and build a solar battery that would be leak-proof and operate efficiently in ambient conditions. Solar batteries which have two electrodes usually include a photosensitive dye in one of the electrodes physically mixed with a stabilising component which helps drive the flow of electrons through the battery. An electrode which is a physical mixture of two materials has limitations on optimal usage of surface area of the electrode. To avoid this, researchers from T. N. Narayanan's group created a heterostructure of photosensitive MoS2 (molybdenum disulphide) and MoOx (molybdenum oxide) to function as a single electrode. Being a heterostructure wherein the MoS2 and MoOx have been fused together by a chemical vapour deposition technique, this electrode allows for more surface area to absorb solar energy. When light rays hit the electrode, the photosensitive MoS2 generates electrons and simultaneously creates vacancies called holes. MoOx keeps the electrons and holes apart, and transfers the electrons to the battery circuit.
This solar battery, which was completely assembled from scratch, was found to operate well when exposed to simulated solar light. The composition of the heterostructure electrode used in this battery has been studied extensively with transmission electron microscope as well. The authors of the study are presently working towards unearthing the mechanism by which MoS2 and MoOx work in tandem with lithium anode resulting in the generation of current. While this solar battery achieves a higher interaction of photosensitive material with light, it is yet to achieve generation of optimum levels of current to fully recharge a lithium ion battery. With this goal in mind, T. N. Narayanan's lab is exploring how such heterostructure electrodes can pave the way for addressing the challenges of present day solar batteries.
Source: Tata Institute of Fundamental Research