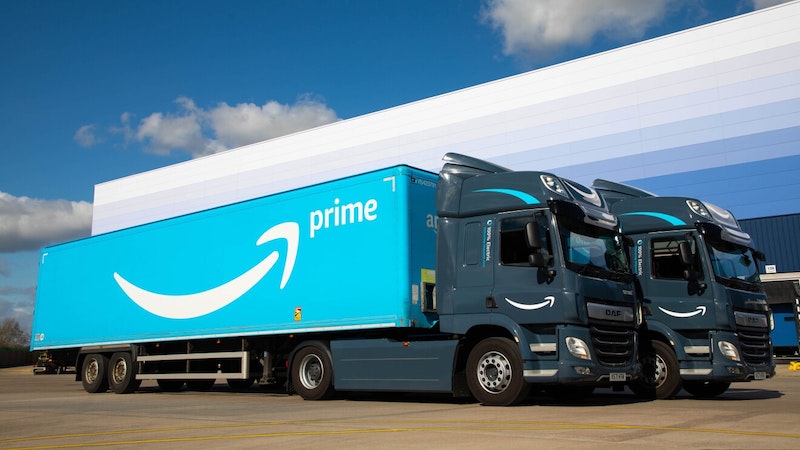 Amazon is launching five electric Heavy Goods Vehicles (HGVs) in its delivery fleet for the first time in the UK. The 37-tonne fully-electric vehicles are now operating from Amazon's fulfilment centres in Tilbury and Milton Keynes, transporting customer packages with zero tailpipe emissions and using battery power. The five vehicles replace diesel HGVs, resulting in up to 100,000 annual road miles fuelled with renewable electricity instead of diesel, preventing 170 tonnes of CO2e from being emitted. They are the first of nine electric HGVs expected by the end of 2022, joining more than 1,000 electric delivery vans currently on the road in the UK.
Amazon's first electric HGVs in the UK and Europe mark an important milestone towards the electrification of its fleet, forming part of Shipment Zero - Amazon's goal to deliver 50% of shipments with net-zero carbon by 2030. Heavy goods vehicles make up around 16 percent of the UK's domestic transport emissions. Amazon's commitment will help play a role in reducing the carbon footprint of the UK transportation sector. Using the latest innovations in battery technology, the electric trucks will soon be using first-of-their-kind fast 360 kW electric charging points at Amazon's Tilbury and Milton Keynes sites. For further information see the IDTechEx report on Electric Truck Markets 2021-2041.
"Amazon is one of the first companies in the world to put electric heavy goods trucks on the road," said John Boumphrey, Amazon UK Country Manager. "We're committed to becoming net-zero carbon by 2040, and this is a milestone as we continue to decarbonise our transportation network so we can deliver more customer orders using zero emissions vehicles."
Eelco van Veen, DAF Trucks Director Fleet Sales: "We are excited to bring the DAF CF Electric HGV into Amazon's fleet and support their commitment towards The Climate Pledge. The DAF CF Electric truck represents an important step in the industry towards zero emission middle mile distribution."
Amazon continues to focus on reducing carbon emissions in middle mile transportation. This includes piloting a range of alternative delivery methods in collaboration with local partners, in order to increase efficiency and reduce emissions. In 2020, Amazon ordered battery electric trucks from Lion Electric in the US and began testing hydrogen-powered trucks, while also expanding multi-modal transport to reduce the emissions from road travel. Amazon is also evolving how it delivers packages to customers' homes, and in 2021, it delivered more than 45 million packages in the UK by more sustainable transportation methods, such as electric vans or cargo bikes. Customers will see more zero emissions vehicles hitting the roads as Amazon continues to expand its fleet.
Since Amazon launched The Climate Pledge in 2019, the company has also continued to invest heavily in renewable energy. The company is the largest corporate buyer of renewable energy in Europe, with 3.5GW of renewable energy projects in Europe and 12 GW globally. Amazon is on a path to powering its operations with 100% renewable energy by 2025 - five years ahead of the original target of 2030.
While Amazon ramps up its initiatives to use zero emission vehicles, a recent report from Oliver Wyman, commissioned by Amazon, showed that shopping online results in 50% less greenhouse gas emissions than physical retail, and over four times less traffic with customers' deliveries only representing 0.5 percent of total traffic in urban areas.
Source and top image: Amazon