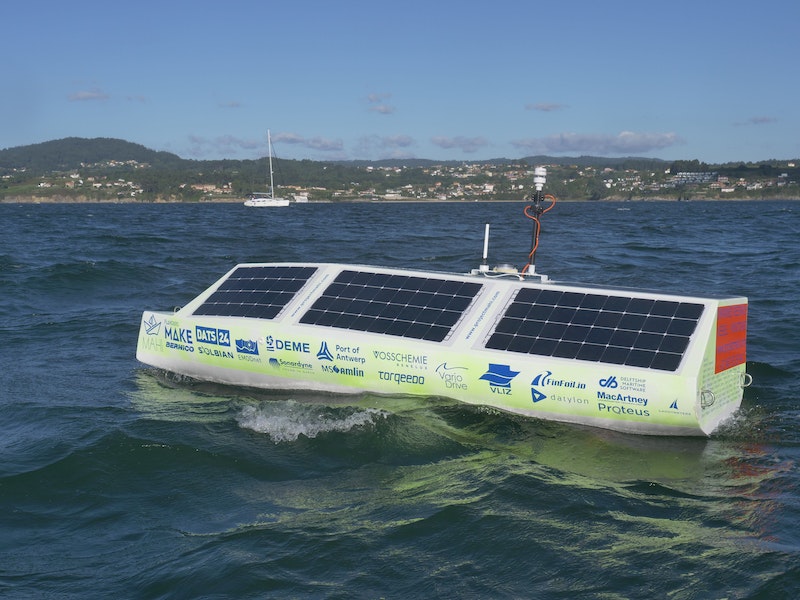 Mahi Two, a Torqeedo-powered uncrewed surface vessel (USV), has become what is believed to be the first to cross the Atlantic Ocean using only solar power. The autonomous robotic boat left the coast of Spain in September 2021 and made landfall in Martinique, in the French Lesser Antilles, six months later, after more than 4,300 nautical miles at sea.
Project Mahi started as many success stories do -- in the founder's garage. Pieter-Jan Note assembled six friends from a variety of engineering backgrounds. They spent the next few years building, designing, and writing software. "Our first crossing attempt in 2019 capsized during an unusually heavy storm in the Bay of Biscay," said Note. "We learned a lot from that short journey, however, and used that knowledge to build Mahi Two."
The four-meter Mahi Two has a composite hull for strength, efficiency and durability. It is driven by a Torqeedo Cruise 2.0 pod drive which the team modified to rotate. "We learned from the previous attempts that we didn't want a rudder," said Note, "So we modified the drive to rotate and steer the vessel."
The Cruise pod drive is powered by two 24V Torqeedo lithium-ion batteries which are charged by Solbian solar panels. The system powers the drive, plus the steering actuator, electronics and bilge pumps. The steering, communication, hardware integration, navigation and energy management onboard are all managed by Mahi's self-developed USV software. The boat communicates using an onboard satellite modem, GPS and automatic identification system. For further information see the IDTechEx report on Autonomous Cars, Robotaxis & Sensors 2022-2042.
Mahi Two's oceangoing adventure started off well, despite spells of bad weather. "The first few months were flawless. Other than adjusting speed to compensate for reduced solar power production, Mahi took on stormy, cloudy days at sea with no problem," recalls Note.
In January, however, disaster struck. Mahi Two suddenly started using more power. The team began to fear that the little USV was taking on water and the bilge pumps were working hard to compensate.
Just days later, the team lost communication with Mahi Two altogether, only 700 nm from her destination. Note recalls, "We tried everything to save Mahi. The Maritime Rescue Coordination Centre in Martinique reached out to a sailing vessel that travelled near Mahi's last known position. The competitors in a transatlantic rowing race searched as well, but it was all for nought. Mahi Two seemed lost." Note and the rest of the team -- Bertold Van den Bergh, Julien Meert, Andreas Belderbos, Quinten Lauwers and Koen Geurts -- scoured the gigabytes of data Mahi Two had sent home, looking for answers.
"Then," said Note, "two months after we had lost communication, I received a surprise call from the Maritime Rescue Coordination Centre in Fort-de-France. Mahi had been found! She didn't sink after all. Instead, she had completed her mission, navigating her way to the coast of Martinique all by herself."
"What an extraordinary achievement by the team at Mahi," commented Maurice Bajohr, vice-president of quality for Torqeedo GmbH. "The successful completion of this trans-Atlantic trek is a clear demonstration of the incredible durability and reliability of solar-electric technology for autonomous long-range missions."
Bajohr observed that USV builders and customers are increasingly switching to solar-electric drives instead of traditional internal combustion engines to eliminate emissions and noise during data collection and navigation, and to reduce operating costs for fuel and maintenance. Torqeedo-powered electric drives are currently used on many hundreds of USVs around the world. These highly specialized boats are used by government and commercial operators for a wide range of missions such as seafloor mapping, oceanographic survey, harvesting data from underwater sensors and surveillance operations.
Source and top image: Torqueedo