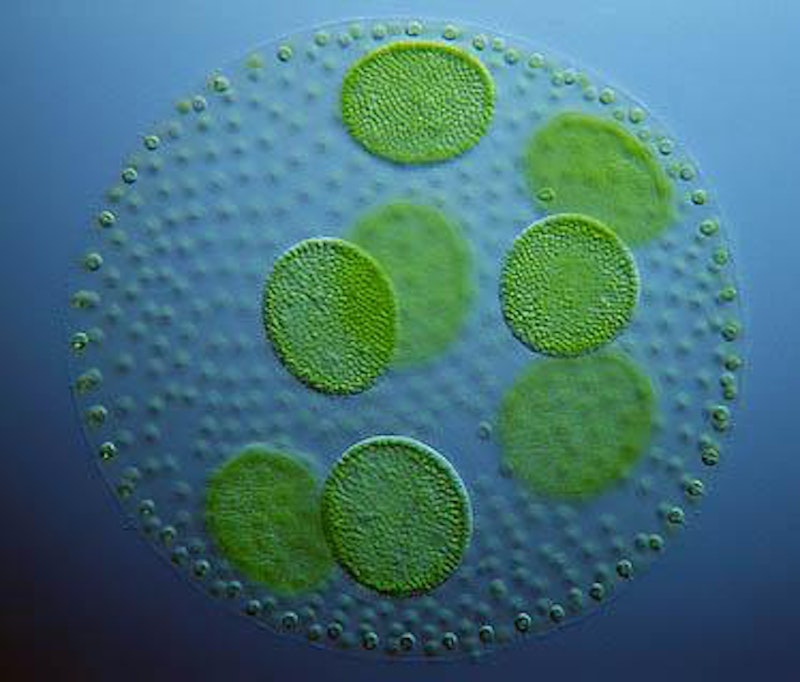 Stanford scientists have plugged into algae cells and harnessed a tiny electrical current. They found it at the very source of energy production - photosynthesis, a plant's method of converting sunlight to chemical energy. It may be a first step toward generating high-efficiency bioelectricity that doesn't give off carbon dioxide as a byproduct, the researchers say.
"We believe we are the first to extract electrons out of living plant cells," said WonHyoung Ryu, the lead author of the paper. Ryu conducted the experiments while he was a research associate for mechanical engineering Professor Fritz Prinz.
The Stanford research team developed a unique, ultra-sharp nanoelectrode made of gold, specially designed for probing inside cells. They gently pushed it through the algal cell membranes, which sealed around it, and the cell stayed alive. From the photosynthesizing cells, the electrode collected electrons that had been energized by light and the researchers generated a tiny electrical current.
"We're still in the scientific stages of the research," said Ryu. "We were dealing with single cells to prove we can harvest the electrons."
Plants use photosynthesis to convert light energy to chemical energy, which is stored in the bonds of sugars they use for food. The process takes place in chloroplasts, the cellular powerhouses that make sugars and give leaves and algae their green color. In the chloroplasts, water is split into oxygen, protons and electrons. Sunlight penetrates the chloroplast and zaps the electrons to a high energy level, and a protein promptly grabs them. The electrons are passed down a series of proteins, which successively capture more and more of the electrons' energy to synthesize sugars until all the electrons' energy is spent.
In this experiment, the researchers intercepted the electrons just after they had been excited by light and were at their highest energy levels. They placed the gold electrodes in the chloroplasts of algae cells and siphoned off the electrons to generate the tiny electrical current.
The result, the researchers say, is electricity production that doesn't release carbon into the atmosphere. The only byproducts of photosynthesis are protons and oxygen.
"This is potentially one of the cleanest energy sources for energy generation," Ryu said. "But the question is, is it economically feasible?" Ryu said they were able to draw from each cell just one picoampere, an amount of electricity so tiny that they would need a trillion cells photosynthesizing for one hour just to equal the amount of energy stored in a AA battery. In addition, the cells die after an hour. Ryu said tiny leaks in the membrane around the electrode could be killing the cells, or they may be dying because they're losing out on energy they would normally use for their own life processes. One of the next steps would be to tweak the design of the electrode to extend the life of the cell, Ryu said.
Possible next steps would be to use a plant with larger chloroplasts for a larger collecting area, and a bigger electrode that could capture more electrons. With a longer-lived plant and better collecting ability, they could scale up the process, Ryu said. Ryu is now a professor at Yonsei University in Seoul, South Korea.
Funding for this research came from the Global Climate and Energy Project at Stanford University and the Yonsei University Research Fund of 2009.
Source: Stanford University
Top image source: Gas 2.0
For more read : Energy Harvesting and Storage for Electronic Devices 2010-2020
and attend Wireless Sensor Networks, Energy Harvesting and RFID in Asia
Energy Harvesting & Storage and Wireless Networks & RTLS USA 2010