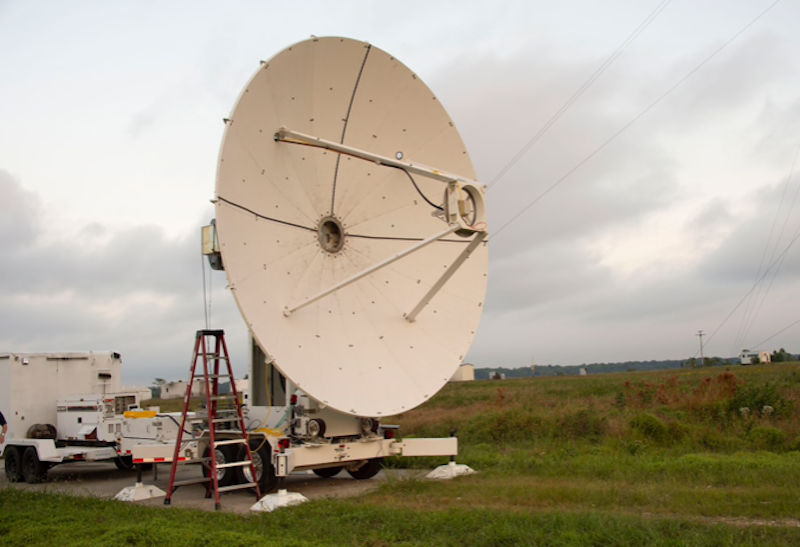 A team of researchers from the US Naval Research Laboratory recently demonstrated the feasibility of terrestrial microwave power beaming by transmitting 1.6 kilowatts of power over 1 kilometer at the US Army Research Field in Blossom Point, Maryland USA, the most significant power beaming demonstration in nearly 50 years.
Microwave power beaming is the efficient, point-to-point transfer of electrical energy across free space by a directive microwave beam. The project, Safe and COntinuous Power bEaming - Microwave (SCOPE-M), was funded by the Office of the Undersecretary of Defense for Research and Engineering's Operational Energy Capability Improvement Fund and led by the project principal investigator, Christopher Rodenbeck, Ph.D., Head of the Advanced Concepts Group, NRL.
Within 12 months, NRL established the practicality of terrestrial microwave power beaming and beamed 1 kilowatt of electrical power over a distance of 1 km using a 10 gigahertz (GHz) microwave beam. SCOPE-M demonstrated power beaming at two locations, one at the U.S. Army Research Field at Blossom Point in Maryland, and the other at The Haystack Ultrawideband Satellite Imaging Radar transmitter at the Massachusetts Institute of Technology in Massachusetts.
"The reason for setting those targets is to push this technology farther than has been demonstrated before," said Paul Jaffe Ph.D., Power Beaming and Space Solar Lead. "You don't want to use too high a frequency as it can start losing power to the atmosphere," Rodenbeck said. "10 GHz is a great choice because the component technology out there is cheap and mature. Even in heavy rainfall, loss of power is less than five percent."
In Maryland, the team exceeded their target by 60 percent by beaming 1.6 kW just over 1 km. At the Massachusetts site, the team did not have the same peak power, but the average power was much higher thereby delivering more energy. Jaffe said these demonstrations pave the way for power beaming on Earth, in space, and from space to Earth using power densities within safety limits set by international standards bodies.
"As engineers, we develop systems that will not exceed those safety limits," Jaffe said. "That means it's safe for birds, animals, and people."
Jaffe went on to say that during past experiments with laser power beaming using much higher power densities, the engineers were able to successfully implement interlock systems so if something approached the beam it would turn off. "We did not have to do that with SCOPE-M because the power density was sufficiently low that it was intrinsically safe," Jaffe said.
Brian Tierney, Ph.D., SCOPE-M electronics engineer, said the DOD is interested in wireless power beaming, particularly wireless power beaming from space, and that a similar rectenna (rectifying antenna) array as used for SCOPE-M could be used in space. A rectenna is a special type of receiving antenna for converting electromagnetic energy into direct current electricity in wireless power transmission systems.
"Although SCOPE-M was a terrestrial power beaming link, it was a good proof of concept for a space power beaming link," Tierney said. "The main benefit of space to Earth power beaming for the DOD is to mitigate the reliance on the fuel supply for troops, which can be vulnerable to attack."
Besides being a DOD priority, Rodenbeck stated power beaming is the ultimate green technology. Unlike other sources of clean energy, which provides intermittent and sporadic electrical power, power beamed from space to Earth can provide power continuously, 24 hours a day, seven days a week, 365 days a year.
"That is something no other form of clean energy can do today," Rodenbeck said. "From the standpoint of technology readiness level, I feel we are very close to demonstrating a system we can truly deploy and use in a DOD application." For further information see the IDTechEx report on Smart City Materials, Systems, Markets 2022-2042.
Source and top image: US Naval Research Laboratory