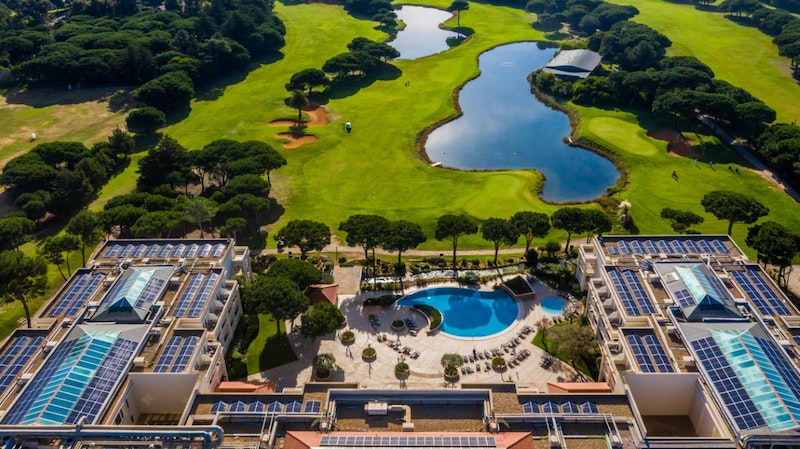 Onyria Quinta da Marinha Hotel has continued its push to achieve a more sustainable and eco-friendly operation with the installation of 553 photovoltaic solar panels, which will now power the hotel's lighting via a renewable source. In partnership with Energias de Portugal, the €240,000 investment will reduce carbon dioxide emissions by 94,188 tons per year, minimising the hotel's reliance on external energy sources, and protecting them against price increases while making the resort more ecologically sound.
Luís Tomé, maintenance director of the Onyria Quinta da Marinha Hotel, said: "The photovoltaic solar panels are currently producing 30% of our electricity which will be used all over the hotel and in particular with the lighting."
The project is part of a wider strategy that is aiming to make Quinta da Marinha an all-encompassing eco-friendly resort, having already installed four electric vehicle chargers, replaced plastic with bamboo in the hygiene kits and eliminated paper-based reservation processes. The new check-in system aims to avoid the use of magnetic cards, instead offering guests the opportunity to enter the rooms via their mobile phones, both streamlining the procedure and removing unnecessary waste products.
Located in the Sintra-Cascais Natural Park, the Onyria Quinta da Marinha Hotel allows guests to enjoy nature and tranquillity with rounds of golf on the 18-hole course, designed by Sir Robert Trent Jones as a par-71 and located just a 30-minute drive from Lisbon. The hotel itself has also been through major additional work, with a remodelling that involved an estimated investment of five million euros and saw major renovations across the facilities at the five-star resort. For further information see the IDTechEx report on Smart City Materials, Systems, Markets 2022-2042.
Paulo Figueiredo, general operations manager for the Onyria group, said: "We have adopted a series of strategies and new procedures to become more efficient and reduce our impact on the environment, which across the group is a major focus of ours. We want to continue gradual, but consistent steps towards more sustainable tourism."
The Onyria Golf Resorts group is part of the natural evolution of a project that began around 25 years ago. The group was created to undertake the integrated management of resorts, villas, hotels, golf courses and restaurants. Onyria Golf Resorts is a family enterprise and began in 1985, with the acquisition of a plot of land in the Quinta da Marinha, Cascais. Current and future touristic investments include various projects which are always situated in the most privileged locales: exquisite locations devoted to relaxation, but with the added advantage of always being close by to urban centers. High-resolution imagery of Quinta da Marinha can be downloaded from here.
Source and top image: Azalea Group