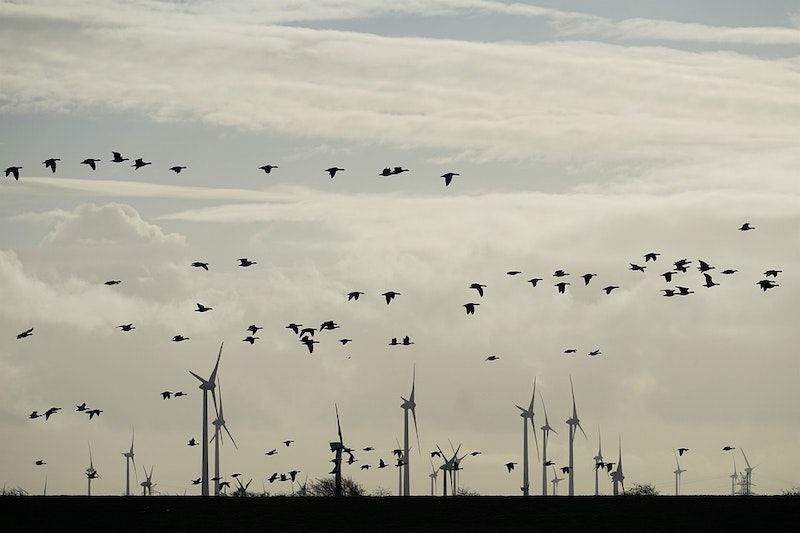 The development of wind energy is expanding worldwide in an effort to limit greenhouse gas emissions and slow climate change. However, locations ideal for harvesting wind energy often overlap with wildlife concentrations, potentially leading to collisions and habitat loss. Researchers have found that data collected by weather radar networks could be used to reduce collisions and minimize habitat-related impacts of wind turbines on nocturnally migrating birds.
"As the development of wind energy expands worldwide, information to minimize impacts of this development on biodiversity is urgently needed," said lead author Emily Cohen, assistant professor at the University of Maryland Center for Environmental Science. "Networked radar data are available across the United States and other countries, and broad application could provide information critical to the bird-friendly expansion of this globally important energy source."
Billions of birds migrate seasonally through North America, with most flying at night and stopping during the day to rest and refuel —frequently in places with high potential for wind energy. Migrating birds are particularly at risk as they move through lower altitudes swept by wind turbine blades, known as the rotor-swept zone, when they are descending to and ascending from stopover habitat.
Efforts have been made to avoid and minimize bird collisions and habitat-related impacts at wind facilities, including siting facilities to avoid high-risk areas, temporarily shutting down turbines when target species are observed nearby, and visually and aurally deterring birds from near facilities.
"All of these management approaches would benefit from a more well-defined knowledge of where and when large numbers of nocturnally migrating birds will pass through the rotor-swept zone and descend to stopover sites during migration," said co-author Jeffrey Buler, Associate Professor of Wildlife Ecology at the University of Delaware.
By examining data continuously collected over four years by seven radars around the North American Great Lakes— an important bird migration corridor—researchers found that weather radar can help identify areas where large numbers of migrating birds fly through the rotor-swept zone and stopover in high densities. They identified a 20-km distance from shorelines where migrating birds are highly concentrated, a threshold that could be useful for guiding the placement of new wind energy development and for identifying peak lift-off and landing times that turbine operation could be curtailed.
For example, although nocturnally migrating birds often fly well above altitudes intersected by wind turbines, researchers found that the proportion of birds in the rotor-swept zone peaked at nearly 50% near sunrise when birds migrating through the Great Lakes region were ending nocturnal migration by landing in terrestrial stopover habitats. However, exposure risk can be minimized by avoiding placement of turbines in areas with the greatest stopover concentrations or curtailing turbine operation during twilight hours, especially during the small fraction of nights during migration passage.
"By quantifying spatiotemporal patterns of aerial and terrestrial habitat use, it is possible to provide an exposure risk evaluation that can help guide future wind energy growth and operation to minimize negative impacts to nocturnally migrating birds from turbine collision and habitat loss," said Cohen.
For further information on energy harvesting research and for a full list of market research reports from IDTechEx, please visit www.IDTechEx.com