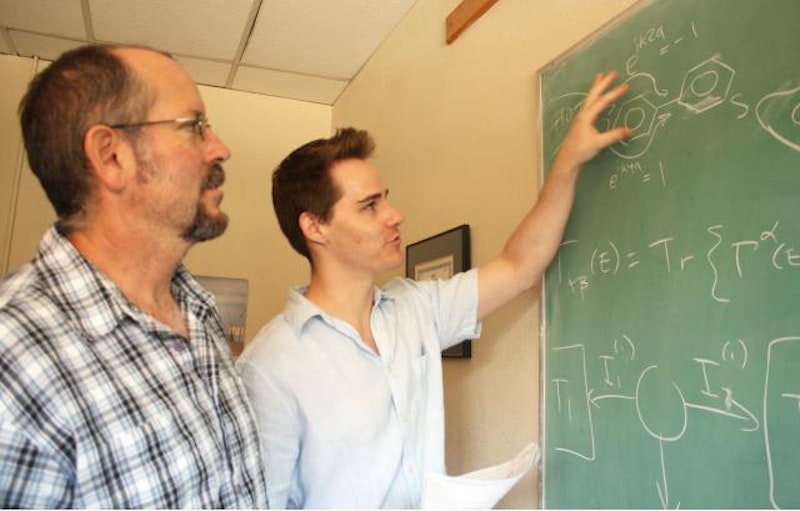 UA physicists have discovered a new way of harvesting waste heat and turning it into electrical power. Taking advantage of quantum effects, the technology holds great promise for making cars, power plants, factories and solar panels more efficient.
The research group led by Charles Stafford, associate professor of physics, published its findings in the September issue of the scientific journal, ACS Nano. "Thermoelectricity makes it possible to cleanly convert heat directly into electrical energy in a device with no moving parts," said lead author Justin Bergfield, a doctoral candidate in the UA College of Optical Sciences. "Our colleagues in the field tell us they are pretty confident that the devices we have designed on the computer can be built with the characteristics that we see in our simulations."
"We anticipate the thermoelectric voltage using our design to be about 100 times larger than what others have achieved in the lab," Stafford added.
Catching the energy lost through waste heat has been on the wish list of engineers for a long time but, so far, a concept for replacing existing devices that is both more efficient and economically competitive has been lacking. Unlike existing heat-conversion devices such as refrigerators and steam turbines, the devices of Bergfield and Stafford require no mechanics and no ozone-depleting chemicals. Instead, a rubber-like polymer sandwiched between two metals acting as electrodes can do the trick.
Car or factory exhaust pipes could be coated with the material, less than 1 millionth of an inch thick, to harvest energy otherwise lost as heat and generate electricity. The physicists take advantage of the laws of quantum physics, a realm not typically tapped into when engineering power-generating technology. The key to the technology lies in a quantum law physicists call wave-particle duality: Tiny objects such as electrons can behave either as a wave or as a particle.
Bergfield and Stafford discovered the potential for converting heat into electricity when they studied polyphenyl ethers, molecules that spontaneously aggregate into polymers, long chains of repeating units. The backbone of each polyphenyl ether molecule consists of a chain of benzene rings, which in turn are built from carbon atoms. The chain link structure of each molecule acts as a "molecular wire" through which electrons can travel.
"We had both worked with these molecules before and thought about using them for a thermoelectric device," Bergfield said, "but we hadn't really found anything special about them until Michelle Solis, an undergrad who worked on independent study in the lab, discovered that, low and behold, these things had a special feature."
Using computer simulations, Bergfield then "grew" a forest of molecules sandwiched between two electrodes and exposed the array to a simulated heat source. "As you increase the number of benzene rings in each molecule, you increase the power generated," Bergfield said. The secret to the molecules' capability to turn heat into power lies in their structure: Like water reaching a fork in a river, the flow of electrons along the molecule is split in two once it encounters a benzene ring, with one flow of electrons following along each arm of the ring.
Bergfield designed the benzene ring circuit in such a way that in one path the electron is forced to travel a longer distance around the ring than the other. This causes the two electron waves to be out of phase once they reunite upon reaching the far side of the benzene ring. When the waves meet, they cancel each other out in a process known as quantum interference. When a temperature difference is placed across the circuit, this interruption in the flow of electric charge leads to the buildup of an electric potential - voltage - between the two electrodes.
Wave interference is a concept exploited by noise-cancelling headphones: Incoming sound waves are met with counter waves generated by the device, wiping out the offending noise. "We are the first to harness the wave nature of the electron and develop a concept to turn it into usable energy," Stafford said.
The UA-designed thermoelectric devices require no moving parts. By design, they are self-contained, easier to manufacture and easier to maintain compared to currently available technology. "You could just take a pair of metal electrodes and paint them with a single layer of these molecules," Bergfield said. "That would give you a little sandwich that would act as your thermoelectric device. With a solid-state device you don't need cooling agents, you don't need liquid nitrogen shipments, and you don't need to do a lot of maintenance."
Molecular thermoelectric devices could help solve an issue currently plaguing photovoltaic cells harvesting energy from sunlight. "Solar panels get very hot and their efficiency goes down," Stafford said. "You could harvest some of that heat and use it to generate additional electricity while simultaneously cooling the panel and making its own photovoltaic process more efficient."
"With a very efficient thermoelectric device based on our design, you could power about 200 100-Watt light bulbs using the waste heat of an automobile," he said. "Put another way, one could increase the car's efficiency by well over 25 percent, which would be ideal for a hybrid since it already uses an electrical motor."
Source and top image of Charles Stafford (left) and Justin Bergfield: University of Arizona
For more read : Energy Harvesting and Storage for Electronic Devices 2010-2020
and attend Wireless Sensor Networks, Energy Harvesting and RFID in Asia
Energy Harvesting & Storage and Wireless Networks & RTLS USA 2010