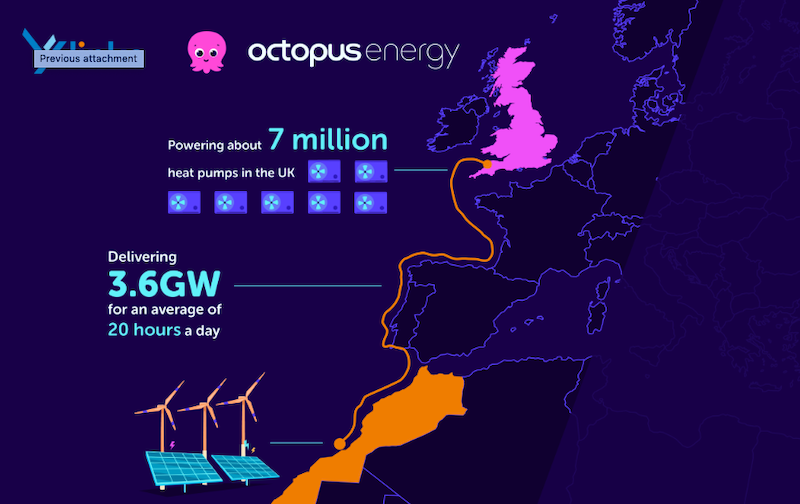 Octopus Energy Group today announces a financial and strategic partnership with Xlinks, the company building the world's largest subsea power cable to deliver renewable energy from Morocco to the UK. Xlinks will speed up the UK's transition to net zero by laying four 3,800km-long subsea cables to connect a huge renewable energy farm in the Moroccan desert with Devon in South West England.
The site will supply 3.6 GW of reliable, clean power to the UK for an average of 20 hours a day, enough green energy to power about 7 million heat pumps all year round. The project will diversify UK supply routes and boost energy security.
It is currently in the development phase, undertaking economic, environmental and archaeological impact assessments. It is scheduled to become operational in 2027. Once up and running, Xlinks is expected to deliver power at £48/MWh¹ (comparable with offshore wind).
This investment marks the beginning of the partnership between the two companies, with further investments already under discussion. The companies are also exploring potential offtaking rights for Octopus and an agreement that would see Octopus's proprietary tech platform KrakenFlex being used to increase value to consumers, and the opportunity to power millions of heat pumps all year round with cheap green electricity.
The partnership is helmed by a team of energy experts and business entrepreneurs, including Chairman Sir Dave Lewis, CEO Simon Morrish and Project Director Nigel Williams who oversaw North Sea Link, the world's longest subsea interconnector linking the UK and Norway, delivering it on time and under budget.
Morocco is setting its sights on becoming a world leader in solar energy, already boasting some of the world's largest solar arrays, and meeting two-fifths of its electricity demand with renewables. There will be huge economic benefits to both countries involved, with Xlinks bringing green energy and engineering jobs to both the UK and Morocco. The partnership comes as the UK government is working on strengthening the country's energy supply routes as outlined in its Energy Security Strategy, lowering its dependence on Russian gas imports whilst lowering prices for consumers and moving the country closer to net zero.
Greg Jackson, founder of Octopus Energy Group, who also personally invested in the project a number of years ago to demonstrate his support, comments: "Going green will cut energy costs for Britain. Freeing ourselves from volatile fossil fuels was already important to help combat climate change, but it's now clear we need to do this for affordability and security. Layering different sources of green energy helps answer the question 'what do we do when the wind's not blowing'. This project is magic because it's all proven technology - on a huge and ambitious scale. The renewables revolution has not just begun, it's now accelerating at an unprecedented pace for the good of people and the planet."
Simon Morrish, CEO of Xlinks, says: "This partnership presents an enormous opportunity to bring down energy bills significantly and help the UK achieve Net Zero. The investment demonstrates the ambition of both Xlinks and Octopus to deliver a cheaper, greener future for the UK public."
About Octopus Energy Group
Octopus Energy Group is a global energy tech pioneer, launched in 2016 to use technology to unlock a customer focused and affordable green energy revolution. It is part of Octopus Group, which is a certified BCorp. With operations in 13 countries, Octopus Energy Group is a British company driving global change. Octopus's domestic energy arm already serves 3.2 million customers with cheaper greener power, through Octopus Energy, M&S Energy, Affect Energy, Ebico, London Power and Co-op Energy. Octopus Electric Vehicles is helping make clean transport cheaper and easier, and Octopus Energy Services is bringing smart products to thousands of homes. Octopus Energy Generation is one of Europe's largest investors in renewable energy, managing a £3.4 billion portfolio of renewable energy assets throughout the continent. All of these are made possible by Octopus's tech arm, Kraken Technologies, which offers a proprietary, in-house platform based on advanced data and machine learning capabilities, Kraken automates much of the energy supply chain to allow outstanding service and efficiency as the world transitions to a decentralised, decarbonised energy system. This technology has been licensed to support over 20 million customer accounts worldwide, through deals with EDF Energy, Good Energy, E.ON energy and Origin Energy. In December 2021, Octopus Energy Group was valued at approximately $5 billion following a $600 million investment from Generation Investment Management and a $300 million investment from Canada Pensions Plan Investments Board. Both investors back businesses that drive sustainability, promote green energy and tackle climate change. It was the company's third major investment round since launching to the market. For more information, check out our website.
About Xlinks
Xlinks exists to capture the power of nature to generate a near constant, low-cost energy supply and connect it to the point of consumption in real time. The Xlinks Morocco-UK Power Project will be a new electricity generation facility entirely powered by solar and wind energy combined with a battery storage facility. Located in Morocco's renewable energy rich region of Guelmim Oued Noun and will be connected exclusively to Great Britain via 3,800km HVDC sub-sea cables. Alongside the output from its solar panels and wind turbines, an onsite 20GWh/5GW battery facility provide sufficient storage to reliably deliver each and every day, a dedicated, near-constant source of flexible and predictable clean energy for Britain, designed to complement the renewable energy already generated across the UK. For more information visit www.xlinks.co

.
For further information on energy harvesting research and for a full list of market research reports from IDTechEx, please visit www.IDTechEx.com