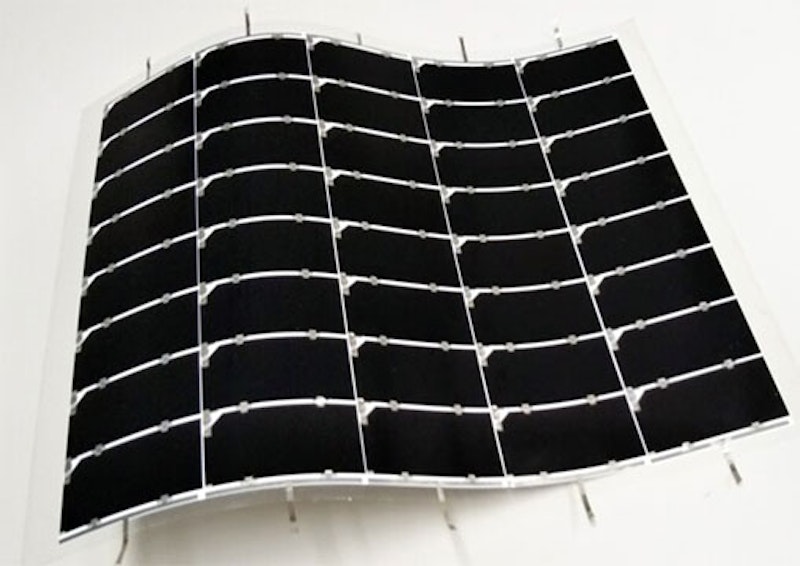 Sharp Corporation has achieved a conversion efficiency of 32.65%, the world's highest, in a lightweight, flexible, practically sized solar module developed as part of the "Research and Development of Solar Cells for Use in Vehicles" project, which is administered by the New Energy and Industrial Technology Development Organization (NEDO) of Japan.
The module's conversion efficiency bests that of a similar Sharp module developed under another NEDO project in 2016, which notched an efficiency of 31.17%, at the time a world record. The new prototype solar module, which uses a triple-junction compound design, is both lightweight and flexible thanks to its structure, which sandwiches the solar cell between layers of film. As a result, the module is expected to be used in a variety of vehicles, an application that demands high efficiency and lightweight construction.
Sharp will continue to conduct R&D into more efficient, lower-cost solar modules with a view to their use in applications including electric vehicles and aerospace. The design, which embodies one path towards achieving carbon neutrality by 2050, will help reduce greenhouse gas emissions from vehicles. For further information see the IDTechEx report on Printed and Flexible Electronics for Automotive Applications 2021-2031: Technologies and Markets.
Efforts to introduce electrified vehicles as a way to lower CO2 emissions and address air pollution are accelerating in the transportation industry, which relies on fossil fuels to meet most of its energy demands. The prospect of supplying power derived from renewable energy is attracting high expectations as an approach with the potential to maximize the effectiveness of those vehicles. In addition, power derived from renewable energy can be supplied directly by equipping EVs with solar cells, promising to make them more convenient for users, for example by lowering fuel costs and reducing the number of times they require charging.
Against this backdrop, Sharp has been developing high-efficiency, low-cost solar modules that can conform to the curved surfaces of vehicles for use in a broad range of vehicles, including in standard EV and aerospace applications, by 2050. This time, Sharp succeeded in developing a lightweight, flexible solar module with a conversion efficiency of 32.65%, the world's highest.
Whereas modules to date have sandwiched solar cells between two sheets of glass, Sharp was able to achieve a lightweight, flexible module by switching to a structure in which the cells are sandwiched between sheets of thin film. Modules measuring about 29 by 34 centimeters (for an area of 965 square centimeters), a size which is large enough to be commercially viable, weigh only about 56 grams (0.58 kilograms per square meter).
Sharp's triple-junction compound solar cell adopts a proprietary structure that comprises three photo-absorption layers with indium gallium arsenide as the bottom layer so that sunlight can be efficiently converted into electricity. Smaller cells using this structure (with an area of 1.047 square centimeters) achieved a conversion efficiency of 37.9% in April 2013. Then in 2016, Sharp used practically sized cells (with an area of 27.86 square centimeters) to create a composite module (with an area of 968 square centimeters) to achieve a conversion efficiency of 31.17%, at the time the world's highest.
In this project, Sharp increased the average conversion efficiency of its triple-junction compound solar cells (with an area of 22.88 square centimeters) from the 2016 modules (from about 34.5% to about 36%) and improved the cell fill factor on each module to improve the conversion efficiency for a practically sized module (with an area of 965 square centimeters) to 32.65%.
Source and top image: Sharp Corporation

What about longevity, notably moisture and UV resistance?