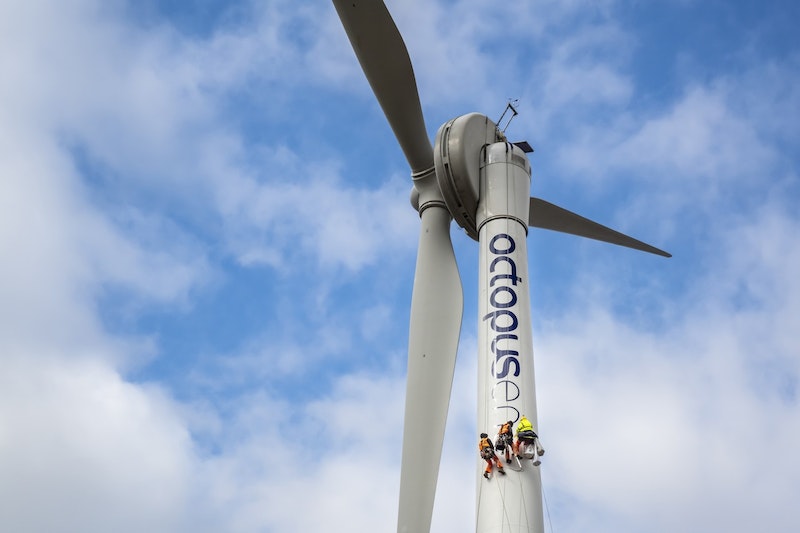 Octopus Energy Group's generation arm, one of the largest investors in solar and wind energy in Europe, has signed its first renewable generation deal in Germany, helping to boost the country's energy security. Octopus Energy Generation's fund management team will build 'Gaishecke', a 35 MW onshore wind farm in Hessen, near Frankfurt. Construction will kick off in the next few weeks and it will become operational by the end of 2023.
Once built, the 10 wind turbines made by Vestas will generate almost 100,000 MWh, enough green energy to power nearly 40,000 households a year. This will offset nearly 60,000 tonnes of CO2 a year, the same as taking 30,000 petrol cars off the road.
Octopus bought the rights for the construction of the wind farm from a consortium of sellers. It is aiming to quickly ramp up its generation portfolio in Germany and its fund management team is already scoping out further sites. By 2030, the company is planning to operate 1,200 MW of wind and solar farms across the country. The move is the next step in Octopus Energy's Germany strategy. The company first launched to the market in November 2020 and a year later together with Tesla, started supplying power to German Tesla Powerwall customers. Over the past year, Octopus' German customer base has grown tenfold, recently crossing the 120,000 households threshold. By 2024, the company is targeting 1 million customers.
The new deal brings Octopus's generation and supply businesses closer together, and will enable Octopus Energy to launch its innovative wind tariff - the 'Fan Club' - in Germany in the future. The tariff, which was kicked off in the UK in 2021, offers communities living close to its wind turbines up to 50% discount on their energy rates. This deal comes as the German government has made clear its ambitions to increase energy security by boosting the construction of home-grown renewables. Russian gas accounted for 55% of Germany's gas imports in 2021*. Onshore wind is one of the fastest and cheapest renewables to build and wean Germany off imported gas. It is forecast that in the next five years, Germany could be Europe's largest wind market**.
Zoisa North-Bond, CEO of Octopus Energy Generation, comments: "We're absolutely thrilled to expand into renewable generation in Germany as we rapidly scale green power across the continent. We're huge fans of Germany's wind market and can't wait to build this wind farm - which will be the first of many - to bring even more cheap green energy to people and help secure energy independence."
Andrew Mack, CEO of Octopus Energy Germany, said: "We've been blown away by the response to Octopus in the German retail energy market. This first onshore wind deal is a really significant milestone and it's just the beginning, bringing green generation even closer to the consumer."
Octopus Energy Generation already manages 3 GW of renewable energy assets across Europe. The company is stepping up its generation capabilities, planning to create 18 GW of clean energy generation projects across the world by 2027.
Octopus Energy Generation bought the wind farm from a consortium of sellers in Germany, LindenProjekt GmbH, FH Beteiligungs GmbH and ISB GmbH.
Octopus Energy Generation's fund management team currently manages renewable assets in the UK, France, Spain, Finland, Sweden, Poland, Ireland and now Germany too.
Sources:
*Reuters
**WindEurope forecast of German wind energy market
About Octopus Energy Generation
Octopus Energy Generation is driving the renewable energy agenda and building green power for the future. This means reshaping the market by leading the transition to a cleaner, greener future through renewable projects connected more deeply to customers and businesses. As one of Europe's largest investors in renewable energy, its fund management specialist team launched in 2010 with a mission to accelerate the transition to a future powered by renewable energy. This team manages 3 GW of renewable energy assets like wind and solar farms across 8 countries, worth over £4bn. These renewable projects generate enough green energy to power 2 million homes every year, and is the equivalent of taking over 800,000 petrol cars off the road. The business also launched the Fan Club in 2021, the world's first local energy tariff that provides cheaper, greener energy to customers living near local wind turbines when the wind blows, with a discount of up to 50%. Thousands of people have got in touch asking for the Fan Club in their community.
About Octopus Energy Group
Octopus Energy Group is a global energy tech pioneer, launched in 2016 to use technology to unlock a customer focused and affordable green energy revolution. It is part of Octopus Group, which is a certified BCorp. With operations in 13 countries, Octopus Energy Group's mission is going global. Octopus's domestic energy arm already serves 3.1 million customers with cheaper greener power, through Octopus Energy, M&S Energy, Affect Energy, Ebico, London Power and Co-op Energy. Octopus Electric Vehicles is helping make clean transport cheaper and easier, and Octopus Energy Services is bringing smart products to thousands of homes. Octopus Energy Generation is one of Europe's largest investors in renewable energy, managing a £4bn portfolio of renewable energy assets throughout the continent.
All of these are made possible by Octopus's tech arm, Kraken Technologies, which offers a proprietary, in-house platform based on advanced data and machine learning capabilities, Kraken automates much of the energy supply chain to allow outstanding service and efficiency as the world transitions to a decentralised, decarbonised energy system. This technology has been licensed to support over 20 million customer accounts worldwide, through deals with EDF Energy, Good Energy, E.ON energy and Origin Energy.
In December 2021, Octopus Energy Group was valued at approximately $5 billion following a $600 million investment from Generation Investment Management and a $300 million investment from Canada Pensions Plan Investments Board. Both investors back businesses that drive sustainability, promote green energy and tackle climate change. It was the company's third major investment round since launching to the market.
For more information, check out our website.
For further information on energy harvesting research and for a full list of market research reports from IDTechEx, please visit www.IDTechEx.com