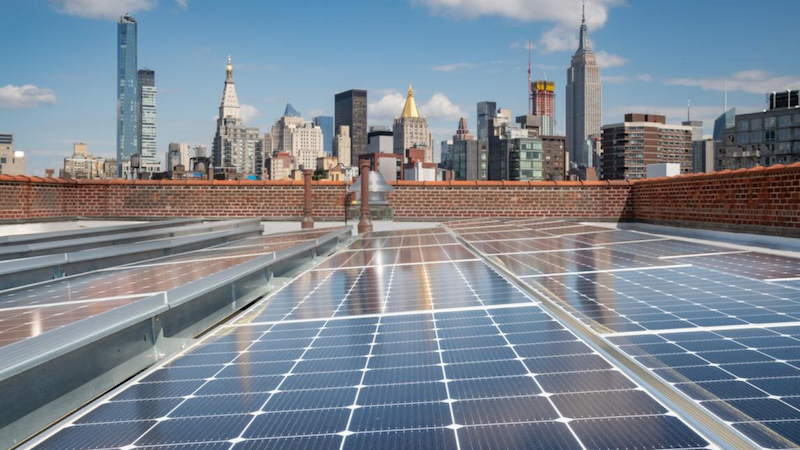 Solar cells are a key feature of creating a sustainable energy ecosystem for the future. Existing solar arrays and cells can produce clean energy from the most abundant source in nature. But increasing their efficiencies while lowering cost to replace coal and gas as energy sources still requires technological advancements — advancements that we need sooner rather than later.
Now, a team of researchers led by Eray Aydil in the Chemical and Biomolecular Engineering Department is tackling one facet of solar cells' inefficiency — the nature of light itself. The issue with silicon solar cells is that they are not the best match for the solar spectrum. Only certain wavelengths can be efficiently utilized with existing cells. For example, ultraviolet and blue light aren't converted to electrical power as well as infrared light. This means that a great deal of the potential energy that could be captured is wasted.
The solution Tandon researchers came up with involved, essentially, "Changing the sun," according to Aydil. They developed a film that can be used in the solar cells to shift the light spectrum, turning ultraviolet and blue light (from the less efficient band of the spectrum) into near-infrared light (the more efficient source for solar cells).
Changing the light spectrum has other benefits to the cells. UV rays can cause the cells to degrade more quickly, which would require them to be replaced more frequently, increasing the cost of electricity. UV rays can also cause overheating due to the excess energy they carry, decreasing their efficiency and contributing to their premature degradation. By shifting these rays into the near-infrared part of the spectrum, the new film can solve multiple issues with a single fix.
Trying to increase the efficiency of solar cells by changing the light spectrum has been a goal of many researchers. The problem is that it can't really be done through small steps. Shifting 10 percent of the light doesn't do much. And previous advances fell short of 30 percent. But in a recent paper, Aydil's team was able to push it to over 82 percent. And an upcoming paper will reveal that they are up to 95 percent. There is a potential to push it past 100 percent too — on this track, it would be possible to get two infrared photons out of every ultraviolet photon.
The team is looking forward to getting the material into a solar cell to see exactly how much extra efficiency the material will provide.
The film has one more very promising advantage — it's the only material of its kind that doesn't use lead. Lead is a dangerous chemical to work with, and mining it can be an environmental disaster itself. And if it somehow makes its way into the environment, cleanup becomes a headache. Removing lead from the equation makes producing and installing their film much more attractive to manufacturers.
Aydil and his team are working to break that 100 percent barrier and push this material to its theoretical limits. As is, it's a bright spot in the fight to move towards renewables for humanity's energy needs.
For further information on energy harvesting research and for a full list of market research reports from IDTechEx, please visit www.IDTechEx.com