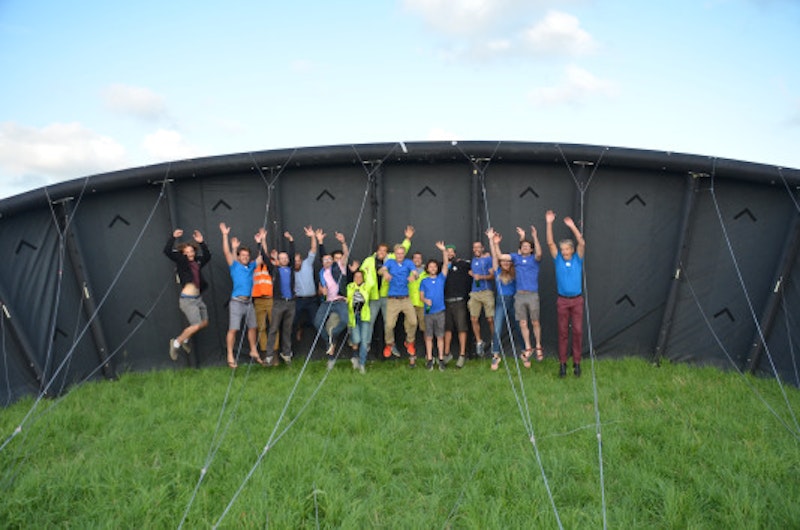 Kitepower has used €4+ million from the preceding rounds to further develop its mobile airborne system into a mature and applicable system. In this way Kitepower is continuing the legacy of Wubbo Ockels first conceived the idea of generating energy via kites in 1993. The company was founded as a result of the research at TU Delft in 2016. There have been three successful pilots - including a pilot with the Dutch Ministry of Defence - and nine versions of the Kitepower system. As a result the Delft-based start-up is now ready for the next phase: introducing the first mobile airborne wind energy system (AWES) to the market. For this purpose, they are launching an investment round via the crowdfunding platform Crowdcube.
Kitepower's 'mobile wind turbines' speak to the imagination. A kind of tether connects a sea container to the kite. The kite turns in a crosswind figure of eight pattern, which produces energy. In the future, one container will be able to provide enough electricity for up to 150 households.
Kitepower CTO Joep Breuer explains the course of development that has taken place://'After conducting six years of research at Delft University of Technology, we launched two working prototypes, with which we have now carried out three successful pilots.V9 is the latest version and has a larger kite and winch. It furthermore utilises the latest technologies, such as advanced micro-computers and lines made of Dyneema (polyethylene), which are up to seven times stronger than steel. While a kite currently generates 100kW per year (150 households), we want to increase that to 200, 300 and 500 kW in the years ahead,' says Joep Breuer, CTO of Kitepower.
'Kitepower wants to develop into an alternative to wind turbines. 'The installed capacity of wind turbines has grown by 14% annually over the past two decades. The lifespan of these turbines is between 20 and 30 years, meaning the greatest proportion of them must be replaced in or around 2050. The aim is to replace them with a greener alternative. Our system comprises 90-95% fewer materials than comparable wind turbines, plus it has a longer lifespan and less-expensive repairs. This results in significantly lower CO2 emissions per extracted kWh,' says Johannes Peschel, Co-Founder & CEO of Kitepower.
Kitepower is a powerful player in the world of microgrids; local energy systems that can operate independently. While this market currently remains dominated by diesel generators, Kitepower's mobile containers provide a good and sustainable alternative. Over the past five years, Kitepower has worked closely with the Dutch Ministry of Defence to be able to deploy the power units militarily in difficult-to-access and desolate areas. 'It takes less than half a day to install the system and get it up and running and this does not require specific expertise. The containers also do not need a laid foundation, which means they can be placed anywhere. This makes our units perfect for use in connection with natural disasters or military missions. The possibilities are endless,' says Roland Schmehl, Co-founder of Kitepower.
Why crowdfunding? Kitepower wants to give everyone the chance to become shareholders of Kitepower and to profit from investing into Kitepower while gaining a network of supporters around the globe.
'With Aruba, we have cracked the code. Years of prototyping led to fully automatically flying kites and the first Kitepower. Flying the system on the Caribbean island of Aruba was the final stress test that we needed before rolling out more units. Our first focus will be temporary power installations where we can fully use the benefits of the most efficient mobile wind energy system that we developed,' says Johannes Peschel, Co-Founder and CEO of Kitepower.
For further information on energy harvesting research and for a full list of market research reports from IDTechEx, please visit www.IDTechEx.com