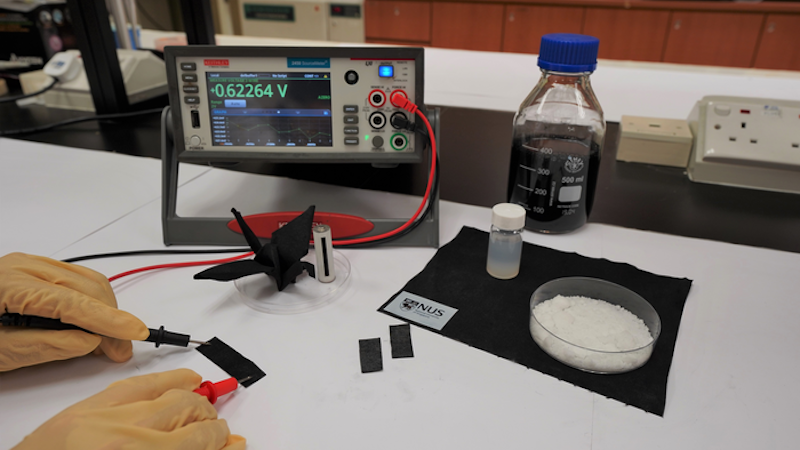 Imagine being able to generate electricity by harnessing moisture in the air around you with just everyday items like sea salt and a piece of fabric, or even powering everyday electronics with a non-toxic battery that is as thin as paper. A team of researchers from the National University of Singapore's (NUS) College of Design and Engineering (CDE) has developed a new moisture-driven electricity generation (MEG) device made of a thin layer of fabric - about 0.3 millimetres (mm) in thickness - sea salt, carbon ink, and a special water-absorbing gel.
The concept of MEG devices is built upon the ability of different materials to generate electricity from the interaction with moisture in the air. This area has been receiving growing interest due to its potential for a wide range of real-world applications, including self-powered devices such as wearable electronics like health monitors, electronic skin sensors, and information storage devices. For further information see the IDTechEx report on Electronics Reshaped 2020-2040.
Key challenges of current MEG technologies include water saturation of the device when exposed to ambient humidity and unsatisfactory electrical performance. Thus, the electricity generated by conventional MEG devices is insufficient to power electrical devices and is also not sustainable. To overcome these challenges, a research team led by Assistant Professor Tan Swee Ching from the Department of Materials Science and Engineering under CDE devised a novel MEG device containing two regions of different properties to perpetually maintain a difference in water content across the regions to generate electricity and allow for electrical output for hundreds of hours.

The NUS team's MEG device consists of a thin layer of fabric which was coated with carbon nanoparticles. In their study, the team used a commercially available fabric made of wood pulp and polyester. One region of the fabric is coated with a hygroscopic ionic hydrogel, and this region is known as the wet region. Made using sea salt, the special water-absorbing gel can absorb more than six times its original weight, and it is used to harvest moisture from the air.
"Sea salt was chosen as the water-absorbing compound due to its non-toxic properties and its potential to provide a sustainable option for desalination plants to dispose of the generated sea salt and brine," shared Asst Prof Tan.
The other end of the fabric is the dry region which does not contain a hygroscopic ionic hydrogel layer. This is to ensure that this region is kept dry and water is confined to the wet region. Once the MEG device is assembled, electricity is generated when the ions of sea salt are separated as water is absorbed in the wet region. Free ions with a positive charge (cations) are absorbed by the carbon nanoparticles which are negatively charged. This causes changes to the surface of the fabric, generating an electric field across it. These changes to the surface also give the fabric the ability to store electricity for use later.
Using a unique design of wet-dry regions, NUS researchers were able to maintain high water content in the wet region and low water content in the dry region. This will sustain electrical output even when the wet region is saturated with water. After being left in an open humid environment for 30 days, water was still maintained in the wet region demonstrating the effectiveness of the device in sustaining electrical output.
"With this unique asymmetric structure, the electric performance of our MEG device is significantly improved in comparison with prior MEG technologies, thus making it possible to power many common electronic devices, such as health monitors and wearable electronics," explained Asst Prof Tan.
The team's MEG device also demonstrated high flexibility and was able to withstand stress from twisting, rolling, and bending. Interestingly, its outstanding flexibility was shown by the researchers by folding the fabric into an origami crane which did not affect the overall electrical performance of the device.
The MEG device has immediate applications due to its ease of scalability and commercially available raw materials. One of the most immediate applications is for use as a portable power source for mobile powering electronics directly by ambient humidity.
"After water absorption, one piece of power-generating fabric that is 1.5 by 2 centimetres in size can provide up to 0.7 volts (V) of electricity for over 150 hours under a constant environment," said research team member Dr Zhang Yaoxin.
The NUS team has also successfully demonstrated the scalability of its new device in generating electricity for different applications. The NUS team connected three pieces of the power-generating fabric together and placed them into a 3D printed case that was the size of a standard AA battery. The voltage of the assembled device was tested to reach as high as 1.96V - higher than a commercial AA battery of about 1.5V - which is enough to power small electronic devices such as an alarm clock.
The scalability of the NUS invention, the convenience of obtaining commercially available raw materials as well as the low fabrication cost of about S$0.15 per metre square make the MEG device suitable for mass production. "Our device shows excellent scalability at a low fabrication cost. Compared to other MEG structures and devices, our invention is simpler and easier for scaling-up integrations and connections. We believe it holds vast promise for commercialisation," shared Asst Prof Tan.
The researchers have filed a patent for the technology and are planning to explore potential commercialisation strategies for real-world applications.
Source and top image: National University of Singapore

And now make this as blankets/shirts and i will power my whole life with it :D this is the best space/weight to performance that we will get *-* really groundbreaking