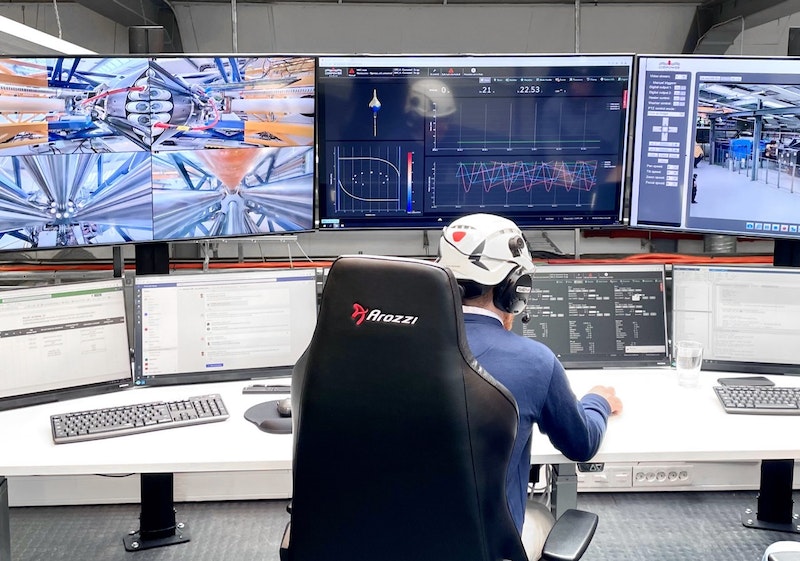 CorPower Ocean's first commercial scale C4 Wave Energy Converter (WEC) has completed a rigorous one-year on-land testing program, following a final 'Ironman' endurance exercise.
The dry test campaign was performed on a purpose-built test-rig at CorPower Ocean's headquarters in Stockholm, Sweden, where the company has developed the world's largest dry-test facility for Wave Energy Converters. Using simulated wave loading from the 7.2MW test rig, the C4 device has been tested in conditions representing several ocean sites around the world, culminating with a final 'Ironman' phase involving continuous operation and exposure to full range storm loading.
CorPower Ocean Director of Integration & Test, Jean-Michel Chauvet said the device was placed under significant duress beyond levels expected in the field of operation, in order to prove its durability and resistance to loads, vibrations and thermal stress. All functions were tested including the C4 WEC's unique survival mode designed for robust operation in the harshest ocean conditions involving cyclic loads up to 4MN (400 tonnes).
"The final Ironman test brings to a close a significant chapter in the development of the CorPower C4 - our first commercial scale Wave Energy Converter," said Mr Chauvet. "This has been an intense one-year process to systematically test our technology. Over this period, we have taken a staged and methodical approach to debug, stabilize and fine-tune the C4 device to provide full confidence in the technology ahead of ocean deployment."
The machine was heavily instrumented, allowing CorPower Ocean's engineers to collect measurements using 500 sensors generating more than one terrabyte of data during the test program. Particular attention was paid to changes in characteristics within mechanical, electrical and pneumatic systems during sustained operation in order to verify reliable operation in periods of high loading. The function and performance of the novel PTO (Power Take off) technology has been well characterized, with the data confirming conversion efficiency on target, with power export up to 700kW.
The PTO system is now set to be transported to northern Portugal for final assembly with a composite hull and mooring components at CorPower Ocean's Portuguese base in Viana do Castelo, prior to ocean deployment of the C4 system at the nearby Agucadoura site.
"A series of significant milestones have been recorded in recent weeks, with the completion of the composite hull and on-land testing of the PTO," said Mr Chauvet. "Site preparation work is well advanced for the deployment of our flagship HiWave-5 demonstration project. This will lay the foundations for one of the world's first grid connected wave energy arrays, in turn helping demonstrate wave energy's potential to bring greater stability to the global energy system and provide a future powered entirely by renewables."
For the last decade CorPower Ocean has been steadily undergoing a five-stage product development and verification process, which initially started with small scale tests in Portugal and France. It later progressed to a half-scale C3 WEC prototype, which also underwent dry testing prior to sea trials in the Orkney Islands, Scotland, leading up to the design, build and testing of the first commercial scale C4 system in 2022.
CorPower Ocean
CorPower Ocean brings high-efficiency Wave Energy technology enabling reliable and cost-effective harvesting of electricity from ocean waves.With our research and development spanning decades, our innovations are inspired by the pumping principle of the human heart. Ocean energy brings stability to the clean energy mix, accelerating the transition to zero-carbon energy.Headquartered in Sweden, with offices in Portugal, Norway and Scotland, we design, build and install turnkey solutions that allow our customers to power the planet with clean energy from ocean waves. For further information on CorPower Ocean visit www.corpowerocean.com