Making Clothing into Computers, Without Electricity 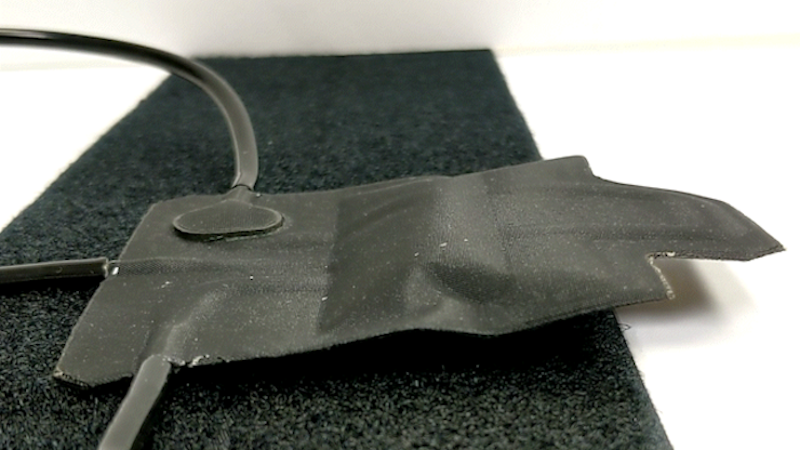 For all the talk about embedding computers in clothing, here's an interesting option. Make the clothing the computer, and do it without electricity. Mechanical engineers at Rice University's George R. Brown School of Engineering are trying the concept on for size with a set of textile-based pneumatic computers capable of digital logic, onboard memory and user interaction.
The lab's "fluidic digital logic" takes advantage of how air flows through a series of "kinked" channels to form bits, the 1s and 0s in computer memories. The idea is to have such textile-based logic gates support pneumatic actuators, potentially in conjunction with an energy harvesting system developed by the Preston lab, to help people with functional limitations with their day-to-day tasks.The research backed by a recent National Science Foundation CAREER Award appears in the Proceedings of the National Academy of Sciences.
Preston said the lab's logic-enabled textiles can be mass produced using existing clothes-manufacturing processes and are resilient enough to withstand everyday use. The researchers claimed the embedded gates are both comfortable and tough enough to drive a truck over without damaging them. (And they proved it.) For further information see the IDTechEx report on E-Textiles & Smart Clothing 2021-2031: Technologies, Markets and Players.
"The idea of using fluids to construct digital logic circuits is not new," he said. "And in fact, in the last decade, people have been moving towards implementing fluidic logic in soft materials, things like elastomers. But so far, no one had taken the step to implement it in sheet-based materials, a feat which required redesigning the entire approach from first principles."
The lab tested its logic on devices that assist users with physical motion and a system to raise and lower a hood with the push of a button, no electricity involved, for thermoregulation.
"We think there's a host of ways this can be implemented to help people go about their daily activities," Preston said. "One of the next areas we're looking into is sensing intent. As soon as the wearer initiates a course of action, we can then offer assistance for the remainder of that action. For example, you might start to grasp an object and if the system senses your intent, it will give you some assistance in closing your hand around that object so you can lift it up," he said.
At the center of the concept sits a "NOT" gate, a basic component of computer circuitry also known as an inverter. This logic gate's output is the inverse (or opposite) of the input. In an electronic circuit, the gate is on or off (1 or 0), but the pneumatic gate replaces those terms with "high" or "low" air pressure.
"We think of the logic element as, at its most fundamental level, containing both a relay and a fluidic resistor," said Anoop Rajappan, a Rice postdoctoral fellow and lead author of the paper. "These would be equivalent to having an electronic relay or transistor paired with the resistor, which is the foundation of typical transistor-resistor logic."
The pneumatic system depends on a concept Preston describes as a mathematically designed kink geometry, implemented in pressure-controllable valves that cut the flow of air the same way a bent garden hose stops water. The valves, each about a square inch in size, are laminated into the textiles and have proved robust enough to handle 20,000 on-off cycles and 1 million flex cycles, as well as 20 cycles in a standard household washing machine.
Source and top image: Rice University