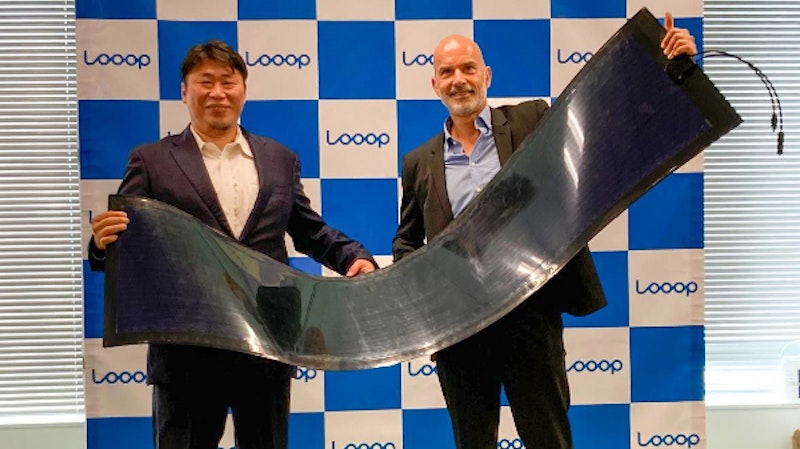 Heliatek has signed a strategic partnership agreement with Looop Inc. to market and install the innovative solar films from the global leader in organic photovoltaics in Japan. The agreement was signed by Guido van Tartwijk, CEO of Heliatek and Looop president and CEO Soichiro Nakamura on Friday, 26th in Tokyo, Japan.
Both companies have already tested the solar films in several pilot projects, including a comparison test site on the campus of the Ritsumeikan University in 2020. Heliatek and Looop are convinced that the innovative solar films are perfectly suited to unlock a large potential of unused surfaces for solar power generation in Japan's metropolises. For further information see the IDTechEx report on Beyond Silicon: Thin Film Photovoltaics 2023-2033.
"We are very pleased to be teaming up with Looop for marketing and delivering our innovative solar films to Japanese customers. Our HeliaSol products deliver an immediate independency from grid price variations and are perfectly suited for roof tops and facades that are unfit for normal solar panels. We believe that together with Looop we can further accelerate the green transition in Japan, because HeliaSol unlocks the surface potential in the heavy urbanized areas and is perfect fit for buildings that are not allowed to carry normal heavy solar panels, because of typhoon regulations for example. We are looking forward to working with Looop to leverage our knowledge and experience to promote our products in Japan as a solution to the challenge of introducing renewable energy to start decarbonization more than 10 times faster than with regular solar solutions." said Heliatek, CEO Guido van Tartwijk.
"We are very pleased to be working with Heliatek, one of the world's leading organic thin-film solar photovoltaic manufacturers. Looop announced its Renewable Energy Power Declaration in April 2022, expressing its determination to contribute to energy self-sufficiency and cost reduction through the promotion of domestically produced renewable energy. We are convinced that lightweight, bendable organic thin-film solar power is a long-awaited technology, especially in landless Japan, where it can be installed on pillar-less domed buildings, bus stops, and plastic greenhouses. We look forward to promoting Heliatek's panels in Japan while leveraging our track record and knowledge of supplying renewable energy in a single package." said Looop Inc, CEO Soichiro Nakamura.
Source and top image: Heliatek