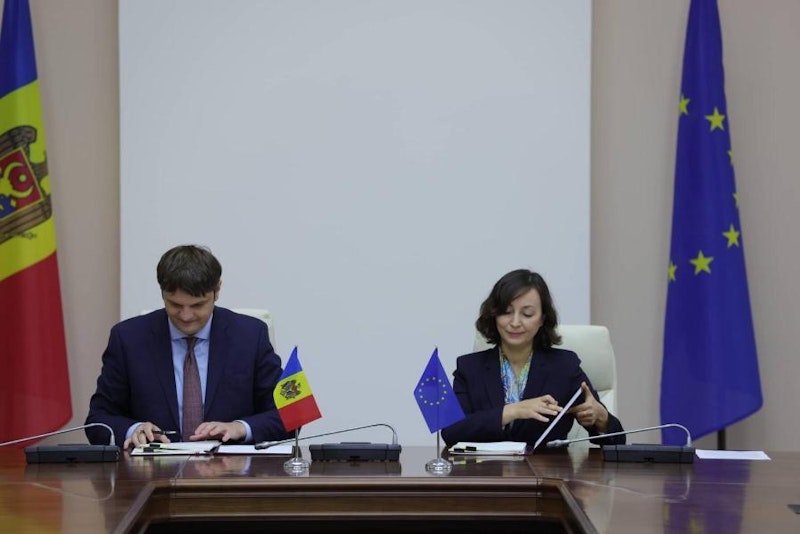 The European Investment Bank (EIB) and the Ministry of Infrastructure and Regional Development of the Republic of Moldova have today signed a €15 million grant agreement funded by the European Union to support the Moldova Energy Efficiency Project. The project will improve the energy efficiency of public buildings, including republican hospitals, schools, kindergartens and health institutions in Moldova.
Greater energy efficiency will be achieved by improving the insulation of buildings, installing more energy-efficient lighting, heating, cooling and ventilation systems, integrating renewable energy sources and introducing efficient energy management practices. Refurbishments financed with this investment will reduce energy consumption, utility bills, air pollution and greenhouse gas emissions from renovated buildings.
EIB Vice-President Teresa Czerwińska, who is in charge of operations in Moldova, said: "With this new agreement we are delighted to foster and support the energy-efficient refurbishment of public buildings in the Republic of Moldova. By supporting better energy performance, the reduction of CO2 emissions and sustainable urban development, the Bank and the European Union will contribute to safeguarding the environment and to improved living conditions for Moldovans. Furthermore, investing in energy efficiency increases the energy security of the country. The ongoing military crisis in the region amplifies the need for Moldova to scale up its efforts in energy efficiency, energy security and the diversification of energy supplies. This project and our joint efforts are the right steps for the country to become more independent, competitive and resilient in energy issues."
Jānis Mažeiks, Ambassador of the European Union to the Republic of Moldova, said: "In the current circumstances, with high energy prices, any reduction in energy consumption translates directly into a significant reduction in energy bills. Investing in energy efficiency is a win-win strategy that increases the energy security of the Republic of Moldova, but also contributes to the country's climate diplomacy agenda. The signature of this agreement will help people and public institutions such as hospitals to cope with the energy crisis."
Andrei Spinu, Deputy Prime Minister and Minister of Infrastructure and Regional Development, said: "Now more than ever, Moldova must strengthen its energy self-sufficiency. Because we are 75% energy dependent, we want to reach the goal of climate neutrality by 2050. Moreover, each project and financial resource used effectively in energy resilience will serve as reinforcement in the face of future crises. Moldovan schools, kindergartens and hospitals are the target institutions for energy efficiency projects. We want to promote a big change in the energy sector, and we thank you for supporting us during this process."
Team Europe makes long-term investments in sustainable economic growth and energy independence of Moldova
The Moldova Energy Efficiency Project supports improved energy efficiency as one of the initiatives of the Economic and Investment Plan of the European Union aiming to the Republic of Moldova with concrete investments to help post-pandemic recovery and improve the lives of Moldovan citizens. The total cost of the project is €94 million. It is co-financed by a €30 million loan from the EIB and a €30 million loan from the European Bank for Reconstruction and Development (EBRD), and an in-kind contribution of €18.5 million from the Moldovan government. The European Union is complementing the project with €15 million in grants from its Neighbourhood Investment Platform (NIP) and €0.5 million from the Eastern Partnership Technical Assistance Trust Fund (EPTATF). A further €28 million from the EIB can be deployed for the project in the future. This financing complements the support provided for energy-efficient public buildings in Chișinău funded under the Eastern Europe Energy Efficiency and Environment Partnership (E5P) fund, which consists of a total investment of €25 million. Of this, €5 million is a grant from the E5P fund and €20 million is in the form of loans provided by the EIB and EBRD.
Background information
EIB Global is the EIB Group's new specialised arm dedicated to increasing the impact of international partnerships and development finance. EIB Global is designed to foster strong, focused partnership within Team Europe, alongside fellow development finance institutions, and civil society. EIB Global brings the Group closer to local people, companies and institutions through our offices across the world.
For further information on energy harvesting research and for a full list of market research reports from IDTechEx, please visit www.IDTechEx.com