In the laboratory of Zhong Lin Wang at Georgia Tech, the blinking number on a small LCD signals the success of a five-year effort to power conventional electronic devices with nanoscale generators that harvest mechanical energy from the environment using an array of tiny nanowires. 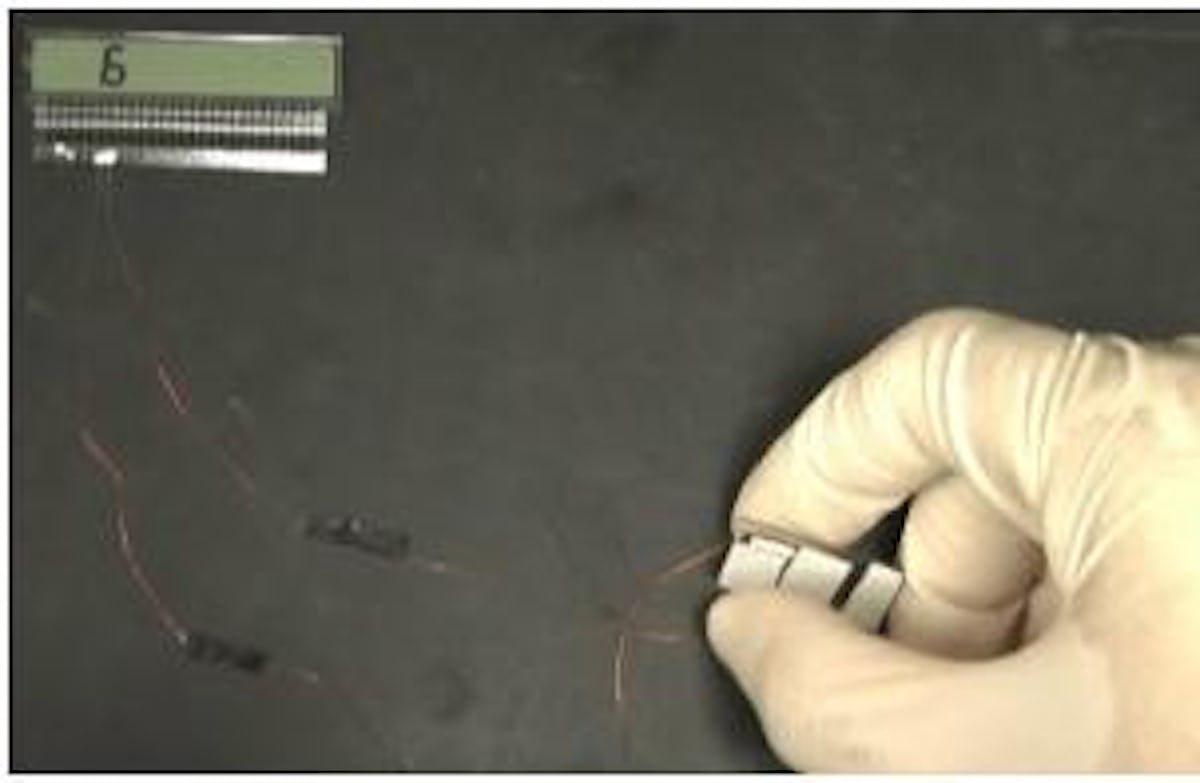 Compressing a nanogenerator between two fingers is enough to drive a liquid-crystal display. (Courtesy: Zhong Lin Wang)
In this case, the mechanical energy comes from compressing a nanogenerator between two fingers, but it could also come from a heartbeat, the pounding of a hiker's shoe on a trail, the rustling of a shirt, or the vibration of a heavy machine. While these nanogenerators will never produce large amounts of electricity for conventional purposes, they could be used to power nanoscale and microscale devices - and even to recharge pacemakers or iPods.
Wang's nanogenerators rely on the piezoelectric effect seen in crystalline materials such as zinc oxide, in which an electric charge potential is created when structures made from the material are flexed or compressed. By capturing and combining the charges from millions of these nanoscale zinc oxide wires, Wang and his research team can produce as much as three volts - and up to 300 nanoamps.
"By simplifying our design, making it more robust and integrating the contributions from many more nanowires, we have successfully boosted the output of our nanogenerator enough to drive devices such as commercial liquid-crystal displays, light-emitting diodes and laser diodes," said Wang, a Regents' professor in Georgia Tech's School of Materials Science and Engineering. "If we can sustain this rate of improvement, we will reach some true applications in healthcare devices, personal electronics, or environmental monitoring."
The earliest zinc oxide nanogenerators used arrays of nanowires grown on a rigid substrate and topped with a metal electrode. Later versions embedded both ends of the nanowires in polymer and produced power by simple flexing. Regardless of the configuration, the devices required careful growth of the nanowire arrays and painstaking assembly.
In the latest paper, Wang and his group members Youfan Hu, Yan Zhang, Chen Xu, Guang Zhu and Zetang Li reported on much simpler fabrication techniques. First, they grew arrays of a new type of nanowire that has a conical shape. These wires were cut from their growth substrate and placed into an alcohol solution. The solution containing the nanowires was then dripped onto a thin metal electrode and a sheet of flexible polymer film. After the alcohol was allowed to dry, another layer was created. Multiple nanowire/polymer layers were built up into a kind of composite, using a process that Wang believes could be scaled up to industrial production.
When flexed, these nanowire sandwiches - which are about two centimeters by 1.5 centimeters - generated enough power to drive a commercial display borrowed from a pocket calculator.Wang says the nanogenerators are now close to producing enough current for a self-powered system that might monitor the environment for a toxic gas, for instance, then broadcast a warning. The system would include capacitors able to store up the small charges until enough power was available to send out a burst of data.
While even the current nanogenerator output remains below the level required for such devices as iPods or cardiac pacemakers, Wang believes those levels will be reached within three to five years. The current nanogenerator, he notes, is nearly 100 times more powerful than what his group had developed just a year ago.
Source and images: Georgia Tech Research News
For more read : Energy Harvesting and Storage for Electronic Devices 2010-2020
and Self-powered nanosensors
and attend Energy Harvesting & Storage and Wireless Networks & RTLS USA 2010