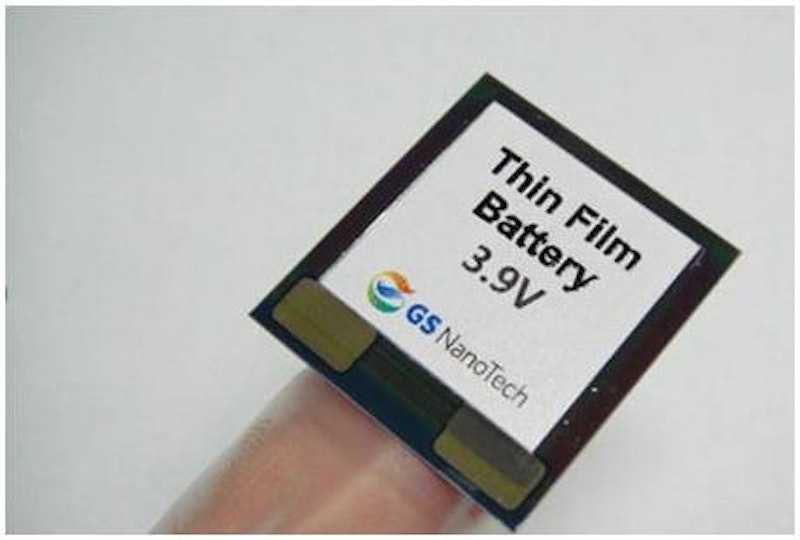 IDTechEx recently visited GS Caltex in Seoul, Korea, who have developed a solid state lithium thin film battery. The company is a joint venture between GS, Korea and Chevron, USA, and its core business is oil refining, gas and power plants. The company also works on renewable energy including fuel cells, biofuels, materials for supercapacitors and thin film batteries.
The benefits of the thin film batteries are that they are suitable for trickle charging, making them an ideal match for energy harvesters; they have a long shelf life; and can undergo many charge cycles compared to conventional rechargeable batteries.

The subsidiary GS Nanotech leads their thin film battery work. Their pilot line and first mass production line can produce hundreds of thousands of cells a year using a sputtering process, and their second mass production line which will be ready in 2013 will be capable of ten times that. The batteries are below 300microns thick and use a solid electrolyte, and work from -20 to 120 Degrees Celsius and so far have been cycled more than 8,000 times to 80% capacity.
Energy can be captured from as little as 3 micro Amps. The batteries work well in extreme temperature conditions and hold 97% of their charge at 50 Degrees Celsius and 93% at 70 Degrees Celsius. The batteries are available now and several options are available. Products range from 10uAh to 500uAh designs. A 1mAh battery will be available in 2011 followed shortly after by a 2mAh version.
GS Nanotech sells the batteries as part of a demonstration kit which includes a thermal, RF and piezo electric energy harvester. They target using their batteries in wireless sensors, cards with displays, RTLS tags and medical sensors. One of their first customers is their parent company who will use wireless sensors in the oil refining process. They are also working with Micropelt , IMEC and leading companies in Korea.
For more information GS Caltex will be exhibiting and presenting at the IDTechEx Energy Harvesting & Storage event in Munich, Germany. See www.IDTechEx.com/munich for details.
For more read : Energy Harvesting and Storage for Electronic Devices 2010-2020
and attend Energy Harvesting & Storage and Wireless Networks & RTLS Europe 2011
Learn more at the next leading event on the topic: Energy Storage Innovations USA 2020