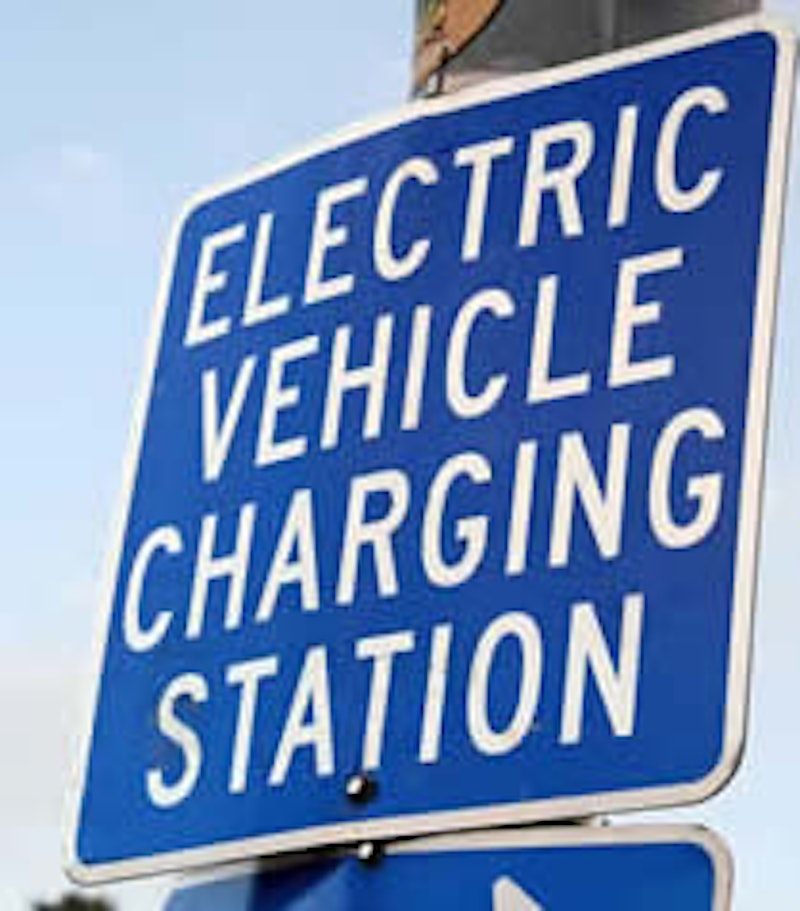 The electric vehicle value chain is shown below. Basically, some finishers buy in the capital intensive powertrain from specialist suppliers and do the labour intensive, less technical coachwork to make a vehicle. This is commonplace with military vehicles and buses for instance. The new IDTechEx reports, Electric Buses and Taxis 2011-2021 and Military, Security & Police Electric Vehicles 2011-2021 give the detail on strong examples of this in buses and military vehicles in particular.
On the other hand, some manufacturers do the whole operation, Toyota, the world number one in electric vehicles, Tara International, Tata Motors/ Tata Motors Europe, Daimler AG (in some cases), Peraves, Alke, eWolf and Nissan being examples. Hybrid powertrains are a particularly complex technology, making them a meaningful segment for some time to come. There is nothing new in this: for example, with conventional cars, Rolls Royce has traditionally left the coachwork to others. However, even hybrid powertrains are simplifying and there will be a trend towards vehicle manufacturers buying in range extenders (Intelligent Energy, Bladon Jets, Polaris Industries), motors (Siemens AG), batteries (Valence Technology, Oxis Energy) etc separately and assembling them themselves into optimised systems.
Electric vehicle value chain 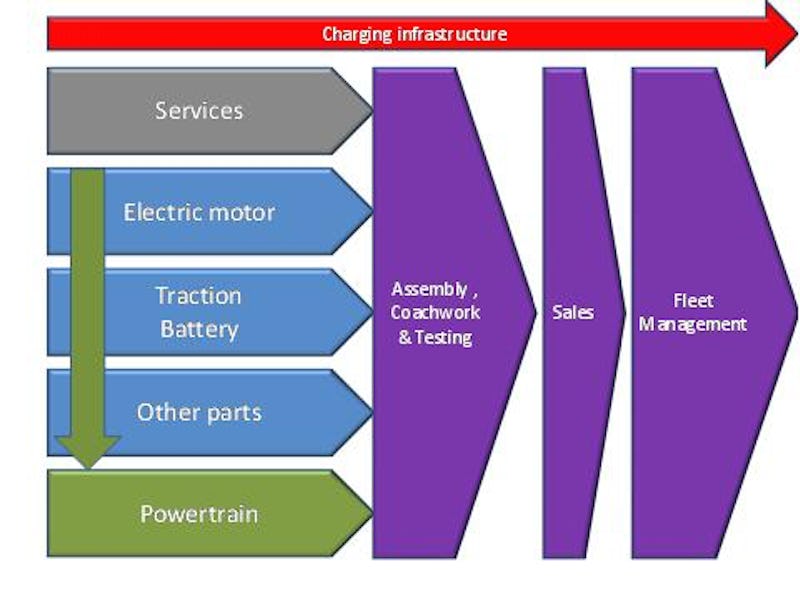 Source IDTechEx
By contrast, the smaller and simpler pure electric vehicles already have nothing that can be identified as a powertrain as such. Donald Wu, CEO of Pihsiang, the leader in pure EV three and four wheel scooters used as mobility for the disabled, has now diversified into pure electric microcars and their traction batteries. He has expressed the view that all of these sectors are best addressed by small local companies in future because their construction is relatively straightforward, with no gear train etc.
This illustrates another trend which is for electric vehicle manufacturers to make key components. This is manufacturers are losing added value in moving to the relatively simpler electric versions of their vehicles - less assembly work, smaller aftermarket - and because they see certain components as key to performance and competitive advantage.
Currently the key enabling technologies in electric vehicles are motors, batteries and control systems. For the next ten years, add to that energy harvesting, supercapacitors (ultracapacitors) and range extenders that replace internal combustion engines in hybrids, notably fuel cells and mini turbines.
To illustrate this we see Toyota and Nissan making their batteries and several manufacturers making their own motors and control electronics - a growing trend. Indeed, the new IDTechEx/PatAnalyse computer analysis of 40,000 patents and commercial success reported in, "Advanced Energy Storage Technologies: Patent Trends and Company Positioning" reveals how automotive leaders such as Toyota and Honda are actively patenting supercapacitor technologies. Nissan partner NEC in traction battery manufacture is a leader in both patenting and selling supercapacitors, having been the original inventor. In energy harvesting, Honda has gone into production with the new flexible photovoltaics and Honda staff tell us this is specifically because of the potential use in electric vehicles.
The largest sector of the electric vehicle market by value is cars and the leaders here are therefore playing for the highest stakes. In doing so, they take a particularly broad view of what constitutes key enabling technology. For example, Nissan makes car charging infrastructure, electric traction motors and - through a joint venture - traction batteries all for its pure electric cars. For its pure electric forklift trucks, it buys in many of these things but for how long as they also start to adopt lithium-ion batteries and so on.
Increasingly, manufacturers gain benefits from horizontal integration as well, because it now becomes easier and the leaders are now larger, with more resources to bring to bear. They make many types of vehicle for different applicational sectors, sharing knowhow and sometimes parts purchasing across divisions. That is why the IDTechEx electric vehicle events in the USA and Europe are called, "Electric Vehicles Land Sea Air" www.IDTechEx.com/evEUROPE and uniquely cover the whole subject - the component suppliers and vehicle manufacturers must now have this broad interest. The next such event is in Stuttgart Germany June 28-29; Examples of broadening activity are shown below.
Horizontal integration by some electric vehicle manufacturers 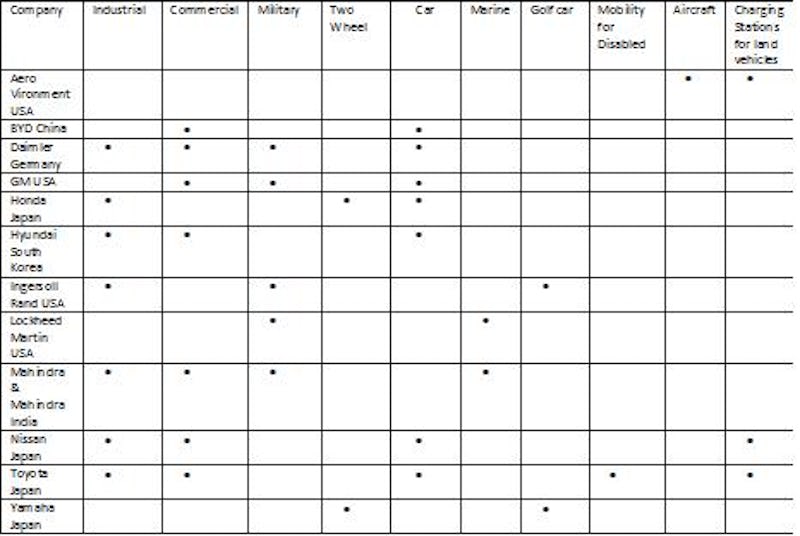 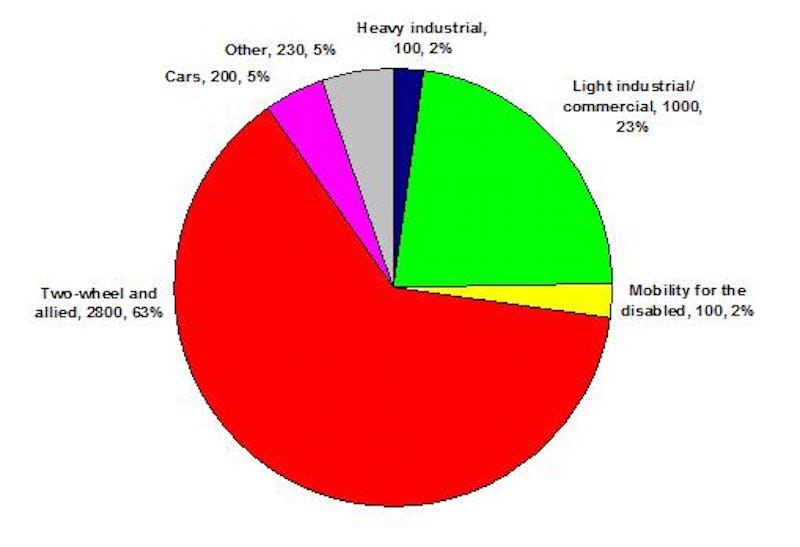 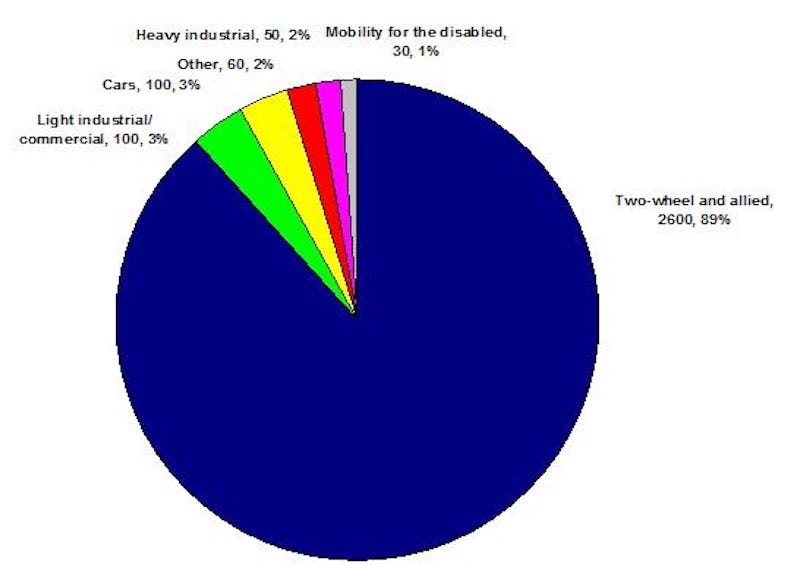 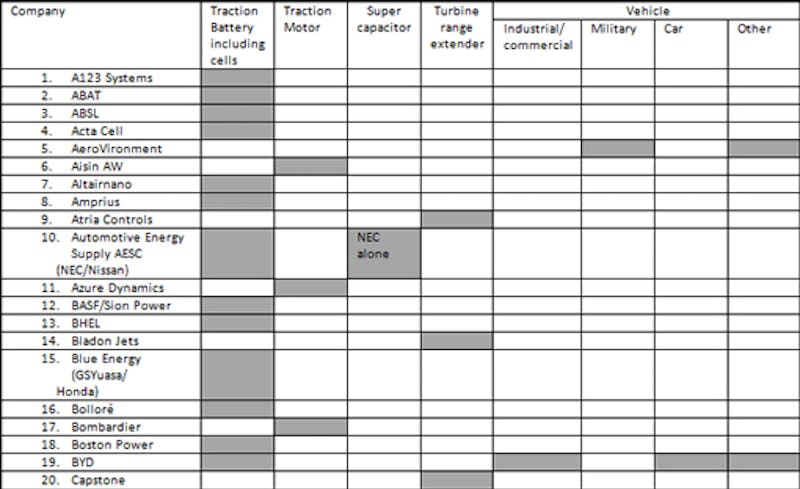 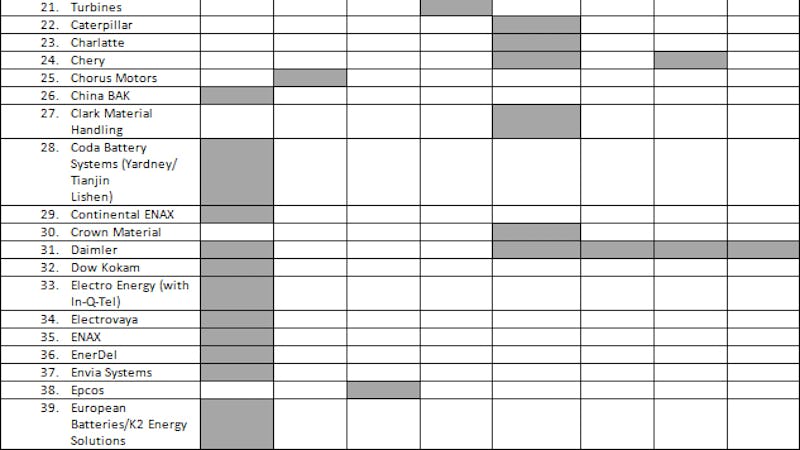 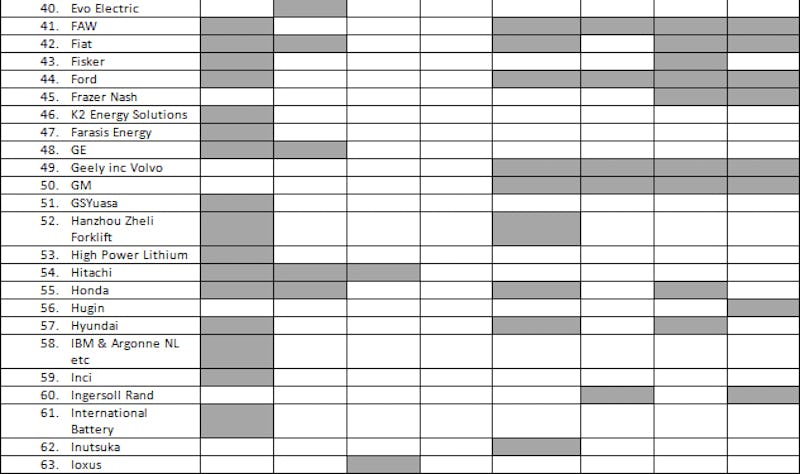 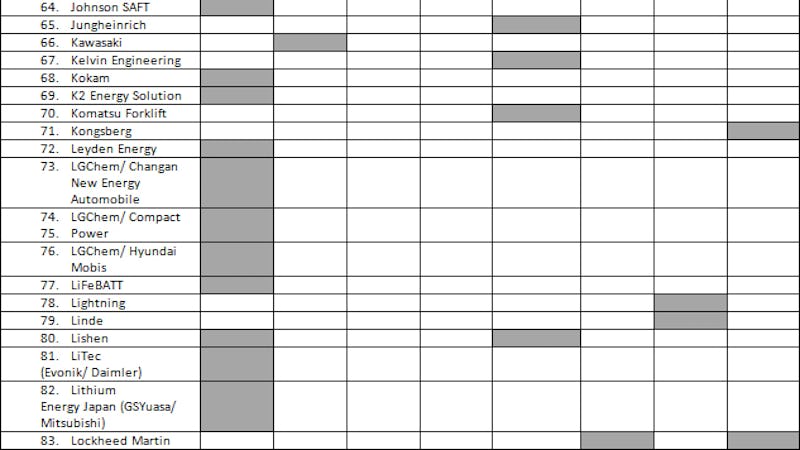 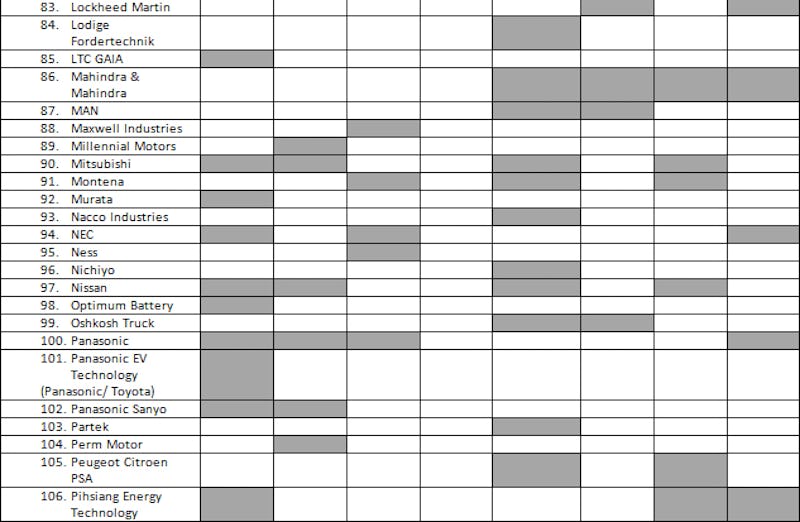 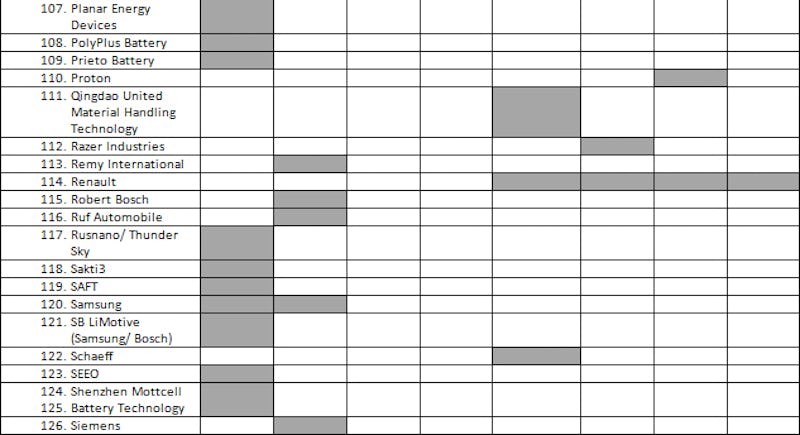 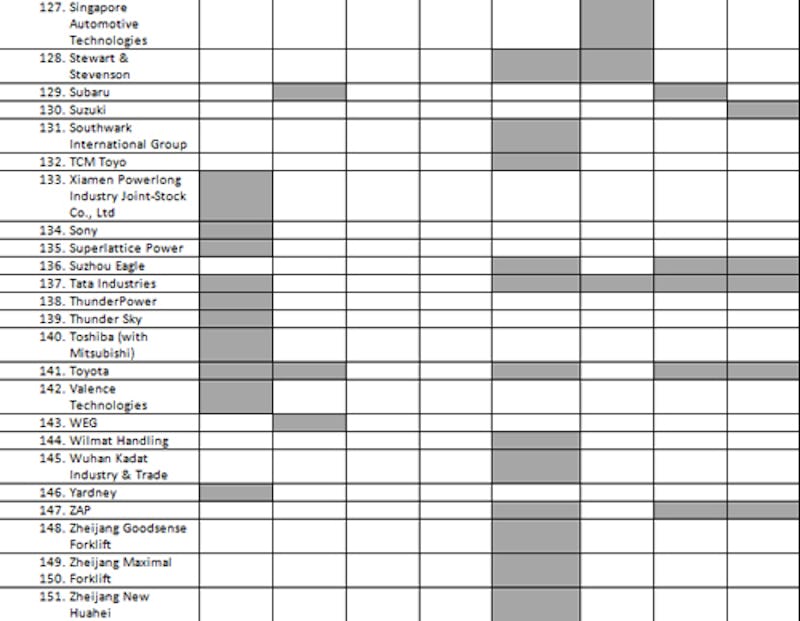