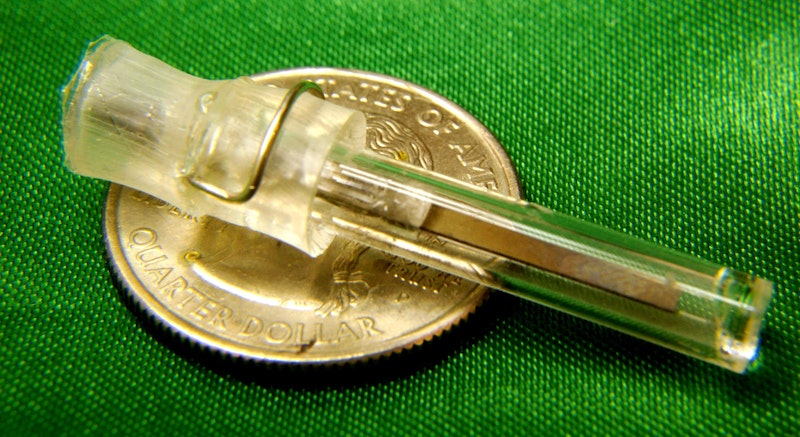 The driving bass rhythm of rap music can be harnessed to power a new type of miniature medical sensor designed to be implanted in the body. Acoustic waves from music, particularly rap, were found to effectively recharge the pressure sensor. Such a device might ultimately help to treat people stricken with aneurisms or incontinence due to paralysis.
The heart of the sensor is a vibrating cantilever, a thin beam attached at one end like a miniature diving board. Music within a certain range of frequencies, from 200-500 hertz, causes the cantilever to vibrate, generating electricity and storing a charge in a capacitor, said Babak Ziaie, a Purdue University professor of electrical and computer engineering and biomedical engineering. "The music reaches the correct frequency only at certain times, for example, when there is a strong bass component," he said. "The acoustic energy from the music can pass through body tissue, causing the cantilever to vibrate."
When the frequency falls outside of the proper range, the cantilever stops vibrating, automatically sending the electrical charge to the sensor, which takes a pressure reading and transmits data as radio signals. Because the frequency is continually changing according to the rhythm of a musical composition, the sensor can be induced to repeatedly alternate intervals of storing charge and transmitting data. "You would only need to do this for a couple of minutes every hour or so to monitor either blood pressure or pressure of urine in the bladder," Ziaie said. "It doesn't take long to do the measurement." 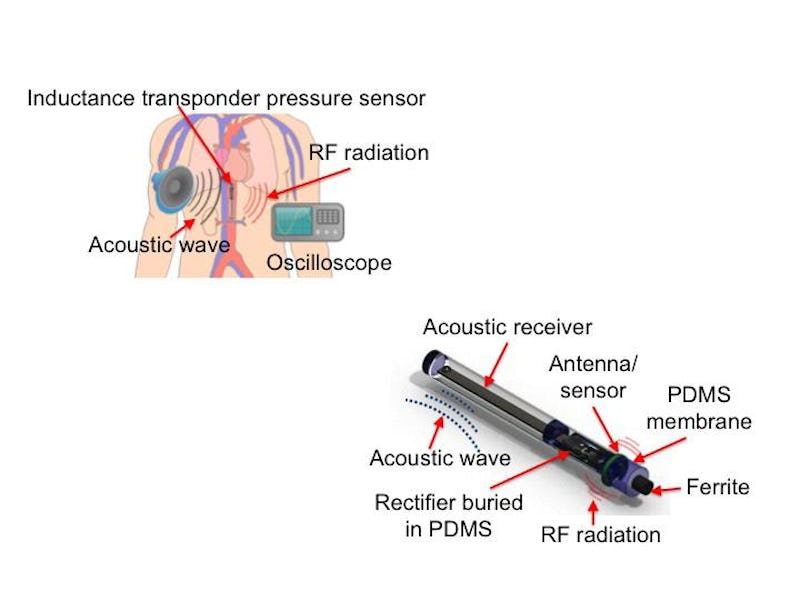 The device is an example of a microelectromechanical system, or MEMS, and was created in the Birck Nanotechnology Center at the university's Discovery Park. The cantilever beam is made from a ceramic material called lead zirconate titanate, or PZT, which is piezoelectric, meaning it generates electricity when compressed. The sensor is about 2 centimeters long. Researchers tested the device in a water-filled balloon. A receiver that picks up the data from the sensor could be placed several inches from the patient.
Playing tones within a certain frequency range also can be used instead of music. "But a plain tone is a very annoying sound," Ziaie said. "We thought it would be novel and also more aesthetically pleasing to use music."
Researchers experimented with four types of music: rap, blues, jazz and rock. "Rap is the best because it contains a lot of low frequency sound, notably the bass," Ziaie said.
The sensor is capable of monitoring pressure in the urinary bladder and in the sack of a blood vessel damaged by an aneurism. Such a technology could be used in a system for treating incontinence in people with paralysis by checking bladder pressure and stimulating the spinal cord to close the sphincter that controls urine flow from the bladder. More immediately, it could be used to diagnose incontinence. The conventional diagnostic method now is to insert a probe with a catheter, which must be in place for several hours while the patient remains at the hospital. "A wireless implantable device could be inserted and left in place, allowing the patient to go home while the pressure is monitored," Ziaie said.
The new technology offers potential benefits over conventional implantable devices, which either use batteries or receive power through a property called inductance, which uses coils on the device and an external transmitter. Both approaches have downsides. Batteries have to be replaced periodically, and data are difficult to retrieve from devices that use inductance; coils on the implanted device and an external receiver must be lined up precisely, and they can only be about a centimeter apart.
Source and images: Purdue University
For more read Energy Harvesting and Storage for Electronic Devices 2011-2021
And attend Energy Harvesting & Storage Europe 15-16 May 2012 Berlin, Germany

Might I suggest that rather than rap music, using a Silva Alpha Wave recording at sufficient volume would serve the same purpose and assist the patient to achieve a sense of well-being at the same time.