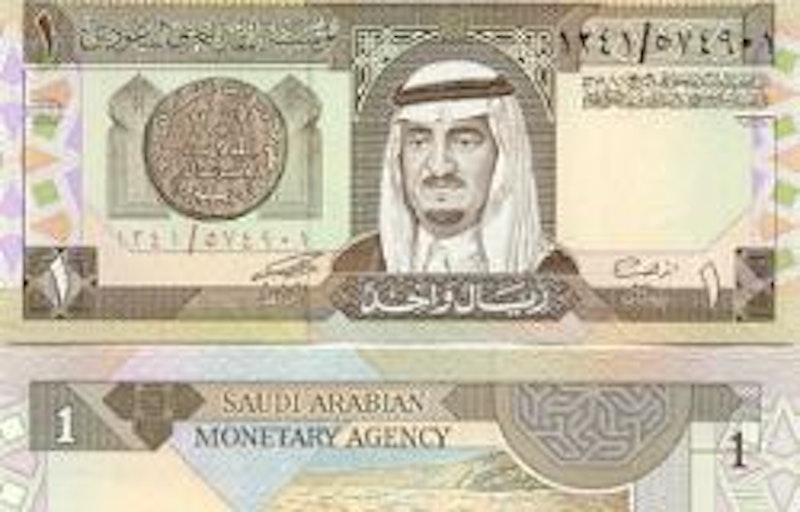 Researchers at the King Abdullah University of Science and Technology (KAUST) Functional Nanomaterials and Devices Laboratory have developed the first all-polymer non-volatile memory device on a banknote. The research was published in April 2012 issue of the prestigious journal, Advanced Materials.
Dr. Husam Alshareef, Associate Professor, Materials Science and Engineering, Ph.D. student Adnan Khan and postdoctoral researcher Dr. Unnat Bhansali collaborated on the project together.
Their combined efforts have led to the first all-polymer ferroelectric memory on a banknote with properties that rival those of memories made on conventional silicon substrate.
Riyal radio identification
The idea of integrating memory on banknotes was conceived to demonstrate the feasibility of fabricating active electronic security features such as Radio Frequency Identification (RFID) tags on banknotes.
In theory, an RFID tag would give governments and law enforcement agencies a means to trace money. The RFID allows money to carry its own history by recording information of its whereabouts, meaning humans are not required to spot counterfeit money.
To make working memory devices on banknotes, all active layers of the device had to be flexible, transparent, inexpensive, capable of being deposited at low process temperatures, and robust. Additionally, these all-polymer ferroelectric memory devices can store data permanently.
Challenges overcome by innovation
Developing the device was a testing process, during which they had to overcome three major challenges; the first being the rough, fibrous surface of the Saudi Riyal - making it almost impossible to fabricate quality electronic devices.
To solve this they integrated a polymeric planarization (smoothing) layer (polydimethylsiloxane - PDMS) on the rough riyal surface, which was flexible, transparent, adhesive and was inert to active layers on top.
The second task was to improve the performance of these all-polymer memory devices on banknotes. Traditionally polymer electrodes have always decreased the performance of such devices.
By chemically doping the polymer electrode material, the team was able to dramatically increase its conductivity and achieve a dramatic improvement in performance of all-polymer ferroelectric memory on a par with metal electrodes.
The third challenge was the integration of the active device on the hydrophobic planarization layer. "The highly conducting water based polymer electrodes would never stick on this hydrophobic layer," explains Adnan.
The team modified the surface of the planarization layer using a gentle plasma process that changed the surface properties without losing the smoothness.
Thanks to the research and perseverance, the memory devices exhibit excellent performance with low operating voltages, high mobilities, and a large memory window with excellent retention characteristics.
Pioneering polymer research
This work has not only demonstrated high performance non-volatile polymer memories on banknotes, but also highlights the fact that polymers can be used as cheap, flexible, and transparent local as well as global interconnects in electronic circuitry instead of metal lines.
Apart from the value of this technology for anti-counterfeiting applications, other possible applications include electronic paper, flexible displays, and sensors.
With a low production cost, the memory could be used in inexpensive disposable sensors and RFID tags useful for tracking and transportation of money, goods, inventory control, and vehicle security.
For more attend the forthcoming events :
Printed Electronics Asia, Japan, Oct 2-3
Printed Electronics USA, CA, USA Dec 5-6