Lithium and gallium compounds in the new electronics and electrics

Analyst IDTechEx has been taking a close look at the elements and compounds used in the new electronics and electrics -components just entering a phase of very rapid growth in sales. These components vary from Nano Electro-mechanical Circuits NEMS to fuel cells that many leading automotive manufacturers will put into on-road vehicles in 2015. Another example is wide area flexible photovoltaics now creating additional large markets based on many different chemistries. We identify the chemical formulations that are most widely deployed. We track those that are most deployable because they are exceptionally versatile in high-added-value electrical functions, giving two important pointers. Other criteria are also used in the new report, Most Needed Chemicals for New Disruptive Electronics and Electrics: De-risk your investment.

The data have been classified by twenty electrical functions performed by each formulation such as active electrode, semiconductor, electret, light emitter, memristor, electroactive (artificial muscle) or laser action. We do this for 37 families of newly popular or imminently popular component. 26 families of most popular and imminently most popular element and compound are charted against these criteria with a plethora of actual examples of formulation to give unique and fascinating maps of where the chemicals and materials industries should concentrate to create the business of 100 billion dollars in fine chemicals that is emerging.
The materials themselves are interesting. They are often in forms previously rarely encountered in electronics and electrics such as nano-powders, elastomer inks and gels. Lesser used compounds are also identified by these criteria, something of interest to the smaller niche players in the industry concentrating on such compounds. Examples are those based on vanadium, molybdenum, lead or zirconium tailored for new electronics and electrics. Printability is an increasingly common theme to gain cost reduction, performance improvement and flexibility, conformability and even foldability in "Origami electronics". The world's largest event on printed electronics is "Printed Electronics USA" in Santa Clara California December 5 and 6. See http://www.idtechex.com/printed-electronics-usa/pe.asp.

In this article we look at the major place being taken by lithium and gallium compounds, areas so fertile that they have led us to do a specific analysis of lithium-ion and other lithium rechargeable battery needs in a new report, 138 Lithium-based Rechargeable Battery Manufacturers: Chemistry, Strategy, Success, Potential. It looks in much more detail at the chemical needs of the market of over ten billion dollars nearly upon us for lithium compounds in forms suitable for slot coating and screen printing in these batteries now seen in everything from Mars rovers, electric aircraft, buses and cars to almost all mobile phones and other consumer electronics.

The report analyses how the battery anode, electrolyte and cathode chemistry and morphology are being totally changed in formulation and structure in order to give us such things as affordable pure-electric cars with much better range and the cleverest mobile phones lasting weeks before recharge - all within the coming decade. Pre-coating with fine carbon elastomers on the cathode and anode foil get introduced for four technical reasons. Active layer can become active layers and even carbon nanotube or graphene technology hosting lithium compounds may replace activated carbon from organic, "carbon from carbide" CFC, aerogel and other sources. Can flammable fluoropolymer binders for the lithium compounds be replaced? Certainly, the cathodes are most complex with Co,Mn,Ni,Fe and other elements variously combined with lithium and this is clarified in a pie chart in the report. The simpler one for anode chemistry is shown below.
Focus of anode chemistry in lithium-based batteries including lithium-ion and "rechargeable lithium". LTO = lithium titanate. Some manufacturers offer many types. 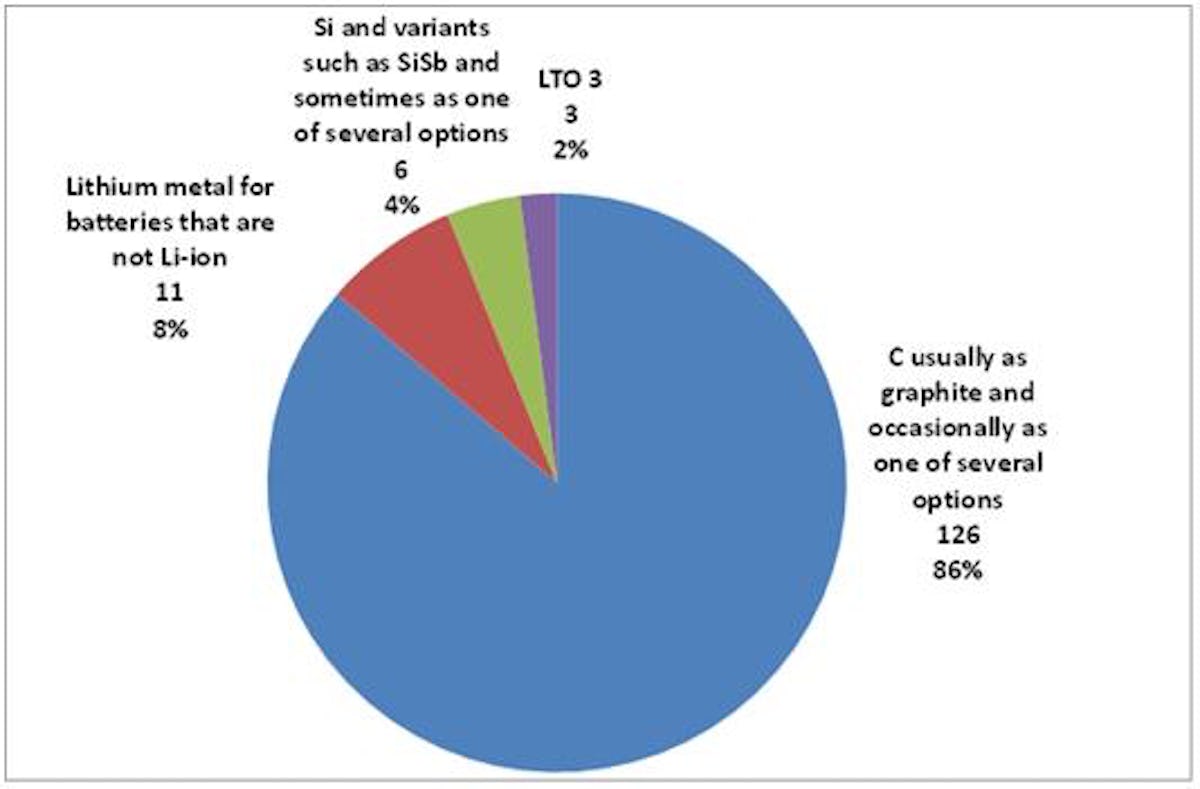 Supercapacitors are the new batteries?

Supercapacitors are now a market growing at 30% compound, with supplier financials to prove it. Cellergy has moved from slot coating of the active layers using scrapers to the more controllable advanced screen printing and this affects the formulations used. Attention is turning to the combination of lithium-ion battery with supercapacitor. One supercapacitor electrode and one lithium-ion electrode results in a "battery" retaining quite good energy density but adding much better power density, low temperature performance, life and cost - or such is the dream being pursued by many of the world's largest companies and many start-ups. Lithium chemistry is key with these "Asymmetrical Electrochemical Double Layer Capacitors AEDLC" as well. See them increasingly referred to as lithium capacitors or lithium-ion capacitors. All this will be covered at the IDTechEx event "Supercapacitors USA" co-located with "Energy Harvesting USA" in Washington DC November 7-8. See http://www.idtechex.com/supercapacitors-usa/sc.asp

Gallium chemistry is not needed in lithium-based batteries but it appears very widely elsewhere in the new electronics and electrics. We discuss it here to give something of a contrast. For example, as the new discipline of transparent electronics opens up, indium gallium zinc oxide is key as the semiconductor. Indeed it is becoming printable to give much higher frequency, higher current transistor networks in printed electronics, another newly vibrant sector.

Light emitting diodes were the basis of the spectacular Olympics Closing Ceremony recently and they are seen in car lights and are even entering home lighting now. LEDs are unlike the compact fluorescent bulbs that create large shards of glass to cut you, contain rare terbium and make you mad by putting mercury into the food chain. Increasingly, LEDs will be more affordable and they last longer, without darkening. They took twenty years to take 3% of the global lighting market but they have grabbed the next 3% in only a few years. Some LEDs can now be printed, offering the prospect of lower cost, flexibility and a host of new applications. That can involve indium gallium nitride light emitting layers. The best mobile phone display, soon to be available in television, is the organic light emitting diode OLED display where CaInGaSn layers can be useful in contrast to gallium nitride that is a candidate for power components in green electricity and electric vehicles and their charging infrastructure. The new photovoltaics gets particularly high efficiency when based on GaAs, GaAsGe, GaInAs and/or gallium indium phosphate. These formulations appear in aerospace such as satellites, for example. There is more.
Top image: Benchmark Electronics