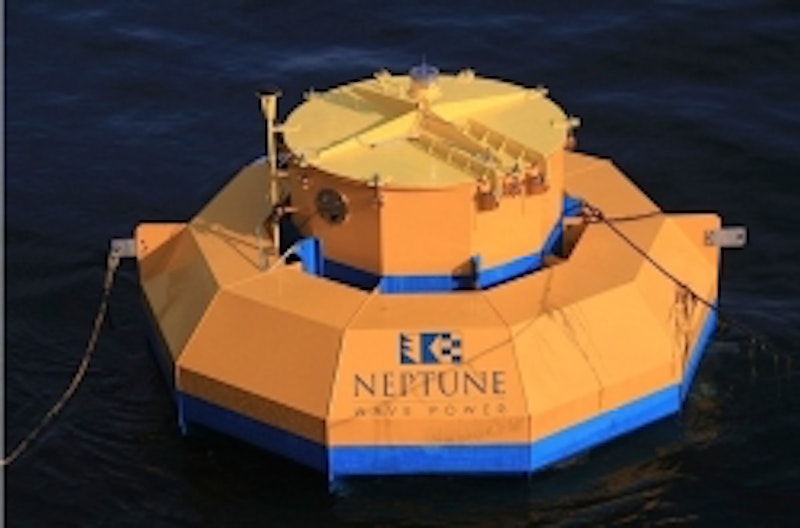 Neptune Wave Power, LLC has been running tests on Model 3.1 of their Wave Energy Conversion (WEC) device within the University of New Hampshire's Center for Ocean Renewable Energy ('CORE') - with great results. The tests have proven the viability of Neptune's technology in a repeatable manner - for the first time.
Neptune Wave Power's technology is a "point absorber" Wave Energy Conversion Device. The floating and securely moored offshore buoy reacts to the vertical surge and irregular movement of waves causing a horizontal pendulum within it to rotate. The rotational energy of this pendulum, through a proprietary internal drive system, is directed to an on board electric generator. Power generated is fed to the utility grid via an underwater cable system at an interconnect point. Neptune's Wave Energy Conversion DEvices are deployed in arrays and are fully scalable to meet the demands of a variety of applications.
"Our goal is to deliver energy by creating the most robust, maintainable, and economic system possible," said Steve Hench, Chief Scientist at Neptune Wave Power. "We are optimizing energy extraction from ocean waves through a tunable system that reacts to a wide range of sea states. The tests have been very positive." Model 3.1 has definitively proven that Neptune's technology can harvest wave energy and convert it into commercially viable electricity.
Both Model 3.0 and 3.1 buoys have been tested at the UNH CORE, with Model 3.1 showing significant improvements in the overall harvesting of energy from waves. The advances of Model 3.1, including a custom designed generator, scalable and mass producible hull design and a remote mechanical tuning feature has allowed Neptune to maximize the energy harvested. "The buoy is performing just as we modelled it," said Eddie Mayfield, President, Neptune Wave Power. "We are very excited to obtain real-world validation of our work to date."
Neptune Wave Power has developed patented technology to produce cost-effective commercial quantities of electric power using a generation system harnessing kinetic energy from ocean waves. The generation cost compares favourably not only with that of other generation systems such as wind power or alternative proposed wave energy capturing devices, but with many other conventional power sources as well.
University of New Hampshire Centre for Ocean Renewable Energy 'CORE' has expertise in ocean engineering, mooring design, device deployment and retrieval, and hydrodynamics modelling. In addition, CORE has many physical assets including two research vessels under the management of UNH, a dedicated dock and launching facility, several onsite mooring components and a wave rider buoy to collect environmental data for detailed site information.
Source and top image: Neptune Wave Power
For more read Energy Harvesting and Storage for Electronic Devices 2012-2022
And attend Energy Harvesting & Storage USA 7-8 November 2012 Washington DC, USA