How to harvest electricity directly from plants 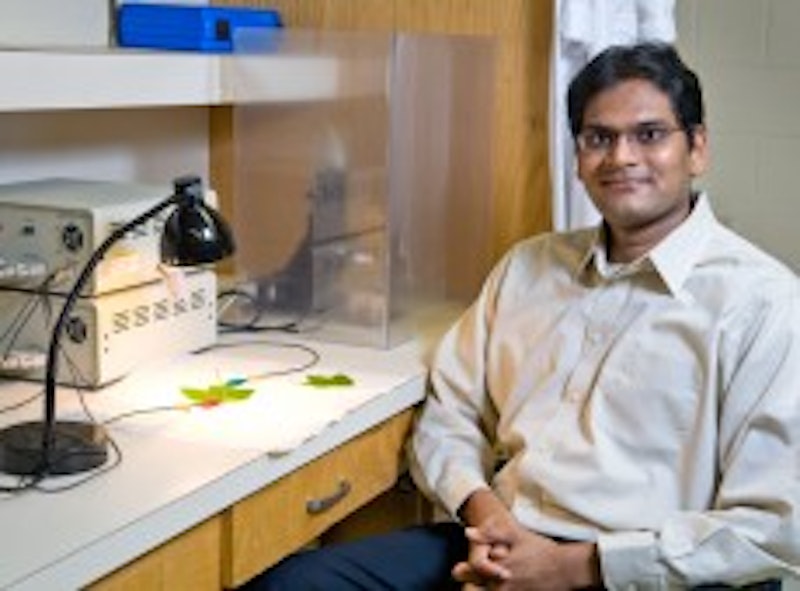 The sun provides the most abundant source of energy on the planet. However, only a tiny fraction of the solar radiation on Earth is converted into useful energy. To help solve this problem, researchers at the University of Georgia looked to nature for inspiration, and they are now developing a new technology that makes it possible to use plants to generate electricity.
"Clean energy is the need of the century," said Ramaraja Ramasamy, assistant professor in the UGA College of Engineering and the corresponding author of a paper describing the process in the Journal of Energy and Environmental Science. "This approach may one day transform our ability to generate cleaner power from sunlight using plant-based systems."
Plants are the undisputed champions of solar power. After billions of years of evolution, most of them operate at nearly 100 percent quantum efficiency, meaning that for every photon of sunlight a plant captures, it produces an equal number of electrons. Converting even a fraction of this into electricity would improve upon the efficiency seen with solar panels, which generally operate at efficiency levels between 12 and 17 percent. During photosynthesis, plants use sunlight to split water molecules into hydrogen and oxygen, which produces electrons. These newly freed electrons go on to help create sugars that plants use much like food to support growth and reproduction.
"We have developed a way to interrupt photosynthesis so that we can capture the electrons before the plant uses them to make these sugars," said Ramasamy, who is also a member of UGA's Nanoscale Science and Engineering Center. Ramasamy's technology involves separating out structures in the plant cell called thylakoids, which are responsible for capturing and storing energy from sunlight. Researchers manipulate the proteins contained in the thylakoids, interrupting the pathway along which electrons flow.
These modified thylakoids are then immobilized on a specially designed backing of carbon nanotubes, cylindrical structures that are nearly 50,000 times finer than a human hair. The nanotubes act as an electrical conductor, capturing the electrons from the plant material and sending them along a wire. In small-scale experiments, this approach resulted in electrical current levels that are two orders of magnitude larger than those previously reported in similar systems.
Ramasamy cautions that much more work must be done before this technology reaches commercialization, but he and his collaborators are already working to improve the stability and output of their device. "In the near term, this technology might best be used for remote sensors or other portable electronic equipment that requires less power to run," he said. "If we are able to leverage technologies like genetic engineering to enhance stability of the plant photosynthetic machineries, I'm very hopeful that this technology will be competitive to traditional solar panels in the future."
"We have discovered something very promising here, and it is certainly worth exploring further," he said. "The electrical output we see now is modest, but only about 30 years ago, hydrogen fuel cells were in their infancy, and now they can power cars, buses and even buildings."
Source and top image of Ramaraja Ramasamy: University of Georgia
For more read Energy Harvesting and Storage for Electronic Devices 2012-2022
And attend Energy Harvesting & Storage USA 20-21 November 2013, Santa Clara, USA