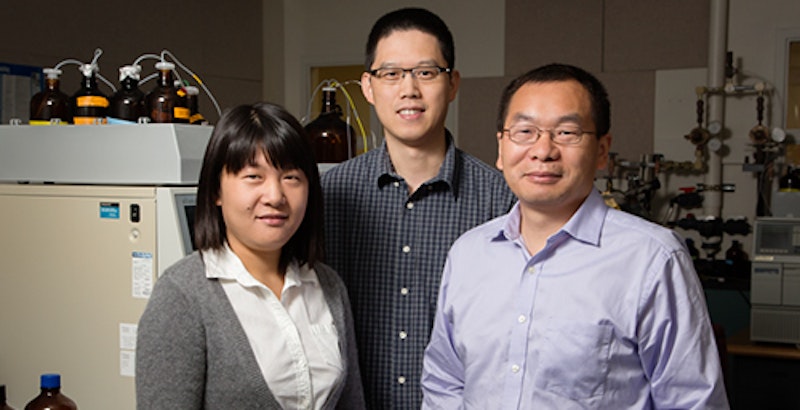 Researchers report that wood-biochar supercapacitors can produce as much power as today's activated-carbon supercapacitors at a fraction of the cost - and with environmentally friendly byproducts.
"Supercapacitors are power devices very similar to our batteries," said study leader Junhua Jiang, a senior research engineer at the Illinois Sustainable Technology Center at the University of Illinois. While batteries rely on chemical reactions to produce sustained electrical energy, supercapacitors collect charged ions on their electrodes (in this case, the biochar), and quickly release those ions during discharge. This allows them to supply energy in short, powerful bursts - during a camera flash, for example, or in response to peak demand on the energy grid, Jiang said.
"Supercapacitors are ideal for applications needing instant power and can even provide constant power - like batteries, but at lower cost," he said. They are useful in transportation, electronics and solar- and wind-power energy storage and distribution.
Many of today's supercapacitors use activated carbon - usually from a fossil-fuel source, Jiang said. "Costly and complicated procedures are normally used to develop the microstructures of the carbon - to increase the number of pores and optimize the pore network," he said. "This increases the surface area of the electrode and the pores' ability to rapidly capture and release the ions."
In wood-biochar supercapacitors, the wood's natural pore structure serves as the electrode surface, eliminating the need for advanced techniques to fabricate an elaborate pore structure. Wood biochar is produced by heating wood in low oxygen. The pore sizes and configurations in some woods are ideal for fast ion transport, Jiang said. The new study used red cedar, but several other woods such as maple and cherry also work well. Expensive and corrosive chemicals are often used to prepare the activated carbon used in supercapacitors, giving the electrodes the physical and chemical properties they need to function well, Jiang said. "The use of those chemicals will probably impose some environmental impacts," he said. "This should be avoided or at least substantially reduced."
Jiang and his team activated their biochar with mild nitric acid, which washed away the ash (calcium carbonate, potassium carbonate and other impurities) in the biochar. The byproduct of this process has a beneficial use, Jiang said: The resulting solution of nitrate compounds can be used as fertilizer. These simple approaches dramatically cut the material and environmental costs of assembling supercapacitors.
"The material costs of producing wood-biochar supercapacitors are five to 10 times lower than those associated with activated carbon," Jiang said. And when a biochar supercapacitor has reached the end of its useful life, the electrodes can be crushed and used as an organic soil amendment that increases fertility.
"The performance of our biochar materials is comparable to the performance of today's advanced carbon materials, including carbon nanotubes and graphenes," Jiang said. "We can achieve comparable performance with much less cost and probably much lower environmental costs."
The Illinois Hazardous Waste Research Fund and the HeteroFoaM Center (an Energy Frontier Research Center funded by the U.S. Department of Energy's Office of Basic Research) supported this study.
Source and top image: University of Illionois
For more read Energy Harvesting and Storage for Electronic Devices 2014-2024, Forecasts, Technologies, Players
And attend Energy Harvesting & Storage USA 20-21 November 2013, Santa Clara, USA
Learn more at the next leading event on the topic: Energy Storage Innovations USA 2020