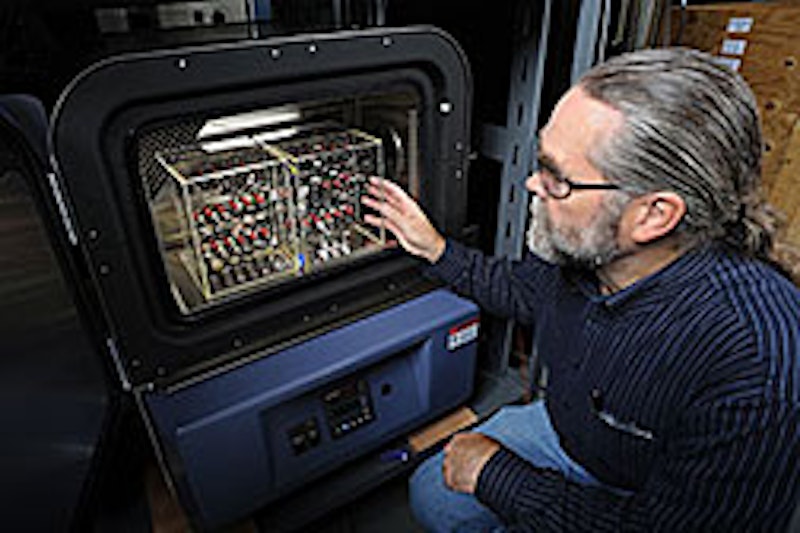 For a battery to work, it needs an electrolyte to act as a bridge and carry ions from the anode to cathode and back again. However, batteries come in all shapes and sizes, and there is no one-size-fits-all approach to battery electrolytes. For example, electric vehicles and "smart" phones are both powered by rechargeable lithium ion batteries, but because the demand on the battery is so different, they require different electrolytes.
These nuances inspired Kevin Gering, a researcher at DOE's Idaho National Laboratory, to build the Advanced Electrolyte Model (AEM), a powerful tool used to analyze and identify potential electrolytes for battery systems.
Gering spent years building the model, constructing the mathematical framework, inputting data on various electrolytes and running tests to verify AEM's accuracy. To date, the model's average accuracies are within 5 percent deviation or less for metrics like conductivity.
The model functions as a virtual lab and simulates experimental conditions to produce an exhaustive set of results. The design of AEM incorporates a comprehensive set of mathematical expressions that describe the statistical mechanics or chemical physics of electrolytes.
Researchers provide Gering with specifications about the project, a batteries' intended use and other parameters. AEM then "runs" experiments and refines the list of potential electrolytes, producing reports on properties and a detailed optimization based on several key factors.
This has become increasingly important since many of today's advanced batteries contain complex, multiple-solvent electrolyte systems. AEM routinely evaluates properties for such electrolytes that contain up to five solvents and two salts each.
"There are models out there that look at viscosity or conductivity or other individual electrolyte factors, but I haven't seen any others like (Kevin's)," said Doug Brune, a researcher a Dow Chemicals who uses AEM. "His does it all."
Source and top image: Oak Ridge National Laboratory
For more read Energy Harvesting and Storage for Electronic Devices 2014-2024, Forecasts, Technologies, Players
and attend:
Energy Harvesting and Storage USA 19-20 November 2014, Santa Clara, USA