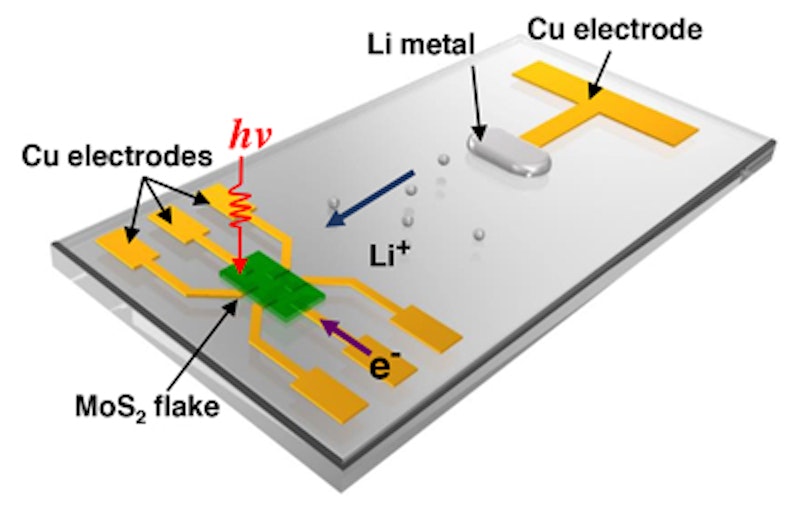 In the quest to develop higher-capacity, longer-lasting batteries, the focus is typically on materials or fabrication techniques. While developing a new way to study and observe battery performance in realtime, a team of researchers from the University of Maryland also discovered that by altering how their battery was charged, they could increase its capacity.
Together with collaborators at Monash University, Department of Materials Science and Engineering (MSE) professor Liangbing Hu and his research group at the University of Maryland Energy Research Center are the first to measure the optical and electrical transport properties of the individual nanoflakes that make up a battery's electrode while it is being charged.
"Conventional measurement techniques reveal the electrochemical and mechanical properties of the entire electrode," explains MSE graduate student Jiayu Wan, a member of Hu's research group and the first author of the paper, "but they can't be used to the measure electrical properties of individual electrode flakes. Our new microbattery platform does. It reveals equally important, if not more important, information that we need to make better batteries."
Wan, Hu and their colleagues wouldn't be able to do it with any battery off the shelf. The key to their technique was designing one that could be simultaneously observed and charged in a device called a probe station, which measures electric transport properties. They created a planar (flat) lithum-ion microbattery with electrodes made of two dimensional molybdenum disulfide (MoS2) crystals, a material currently being studied for use in photonic, optoelectronic and energy devices.
Wan and research associate Wenzhong Bao (MSE/Physics) were testing the resistance of the new battery's electrodes at the nanoflake level when they realized that the way in which it was charged could be as important as how it was made.
"While we were developing our measurement process, we discovered a novel rapid charging technique that led to enhanced conductivity and three times the capacity than when the same battery was traditionally charged," Wan explains. "We're the first group to demonstrate this. There have been studies associating charging speed with how long a battery lasts, but not with its energy storage capacity."
For now, Wan says, the application of the charging technique is limited to Li-ion batteries made with MoS2, but the team is continuing its research, searching for other compatible battery configurations and electrodes.
Bao, Hu and Wan's collaborators include Professor Michael Fuhrer (Monash University, Australia); Hu Group members Jiaqi Dai, Fei Shen, Lihui Zhou, Daniel Urban, and Yuanyuan Li; Yang Liu and Katherine Jungjohann (Sandia National Laboratories); and Xinghan Cai (Department of Physics, University of Maryland).
Source and top image: University of Maryland
For more see Electric Vehicle Forecasts, Trends and Opportunities 2015-2025.
and attend Electric Vehicles: Everything is Changing 28-29 April 2015 in Berlin, Germany