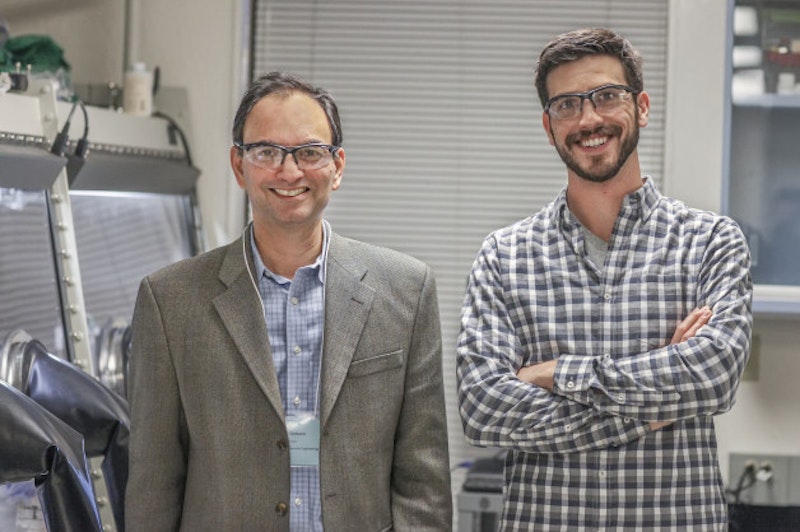 Lawrence Berkeley National Laboratory (Berkeley Lab) battery scientist Nitash Balsara has worked for many years trying to find a way to improve the safety of lithium-ion batteries. Now he believes he has found the answer in a most unlikely material—a class of compounds that has mainly been used for industrial lubrication.
Balsara and his co-inventor, Joseph DeSimone of the University of North Carolina at Chapel Hill, launched Blue Current, a startup company backed by investment firm Faster LLC, to further develop their invention, a nonflammable electrolyte.
"With current lithium batteries safety is engineered through the battery management system," Balsara said. "Although they are generally considered safe, you still have an electrolyte in the battery that is flammable, and every so often something might go wrong. We want to take that anxiety out of the battery."
The electrolyte is a chemical substance that carries electrical charge between the battery's cathode and anode when the cell is charged or discharged. Electrolytes used in conventional lithium batteries are flammable, and incidents of fires have been reported, usually due to thermal runaway. As lithium batteries become more widespread and also larger in size—they're used not just in cell phones and laptops but also airplanes, electric cars, and the power grid—the chance of failure increases.
Blue Current's electrolyte is a fluorinated liquid called perfluoropolyether, or PFPE. "Things that contain fluorine don't burn very easily," said Balsara, a researcher in the Materials Sciences and Energy Storage Divisions of Berkeley Lab and also a professor of Chemical and Biomolecular Engineering at UC Berkeley. "They'll evaporate, but they won't catch fire."
As described in a paper published last year in the Proceedings of the National Academy of Science, Balsara, DeSimone, and co-authors demonstrated that their PFPE-based electrolytes "exhibit reasonable conductivity and unprecedented transference numbers," and are compatible with standard battery electrodes. The transference number, which quantifies the relative ease with which lithium ions move in electrolytes, is an important parameter that influences battery performance.
There is no nonflammable lithium battery on the market today, though others are attempting to make one. Balsara himself co-founded his first battery company, Seeo, in 2007 based on another one of his inventions, a dry polymer electrolyte, which is nonflammable. Seeo recently announced a major investment from Samsung Ventures, but Balsara is no longer directly involved with the company.
Blue Current, based in Berkeley, California, employs three battery scientists and is looking to hire more. Along with Balsara and DeSimone, the third co-founder is Alex Teran, a former graduate student of Balsara's. The company name was chosen to reflect the safe passage of current through batteries.
Their main challenge now is to improve the conductivity of their PFPE electrolyte. "Because the fluorinated compound is not as conductive, you can't charge these batteries very quickly, and you can't draw current very quickly," Balsara said. "The company's research goal is to hasten the ions' motion through the electrolyte."
A slow discharge means, for example, that acceleration would be compromised when stepping on the pedal in an electric car. "If there's a truck coming, you need to accelerate", he said. "So while this electrolyte may not be ideal for vehicles at this point, there are other applications where the rate of discharge is not as important."
Blue Current's engineers are working on modifying the molecular structure of the electrolyte in order to speed up lithium ion motion. Balsara notes that there are uses where the battery does not need to respond in seconds or even minutes. For example, as more people are installing solar panels on their homes, some are thinking about storing that energy for rainy days or nighttime use. "There are applications where safety is not a luxury but a necessity," Balsara said.
Source and top image: Lawrence Berkeley National Laboratory