In June 2014, the International Renewable Energy Agency (IRENA) launched a global renewable energy roadmap called REmap 2030. The aim is to assess pathways to double1 the share of renewable energy in the global energy mix by 2030 (IRENA, 2014). REmap 2030 is the result of a collaborative process between IRENA, national experts in and other stakeholders around the world.
The REmap 2030 approach runs along two parallel tracks of analysis:
The country-based analysis of REmap 2030 suggest that national renewable energy plans would increase the renewable share in annual global power generation from 22% in 2014 to 27% by 2030. However, the results also suggest that existing plans underestimate current market growth, especially for variable renewable energy (VRE) sources like solar photovoltaics (PV) and wind power. Consequently, the roadmap reveals the option to deploy an additional 800 gigawatts (GW) of solar photovoltaics (PV) and 550 GW of wind power between 2010 and 2030. 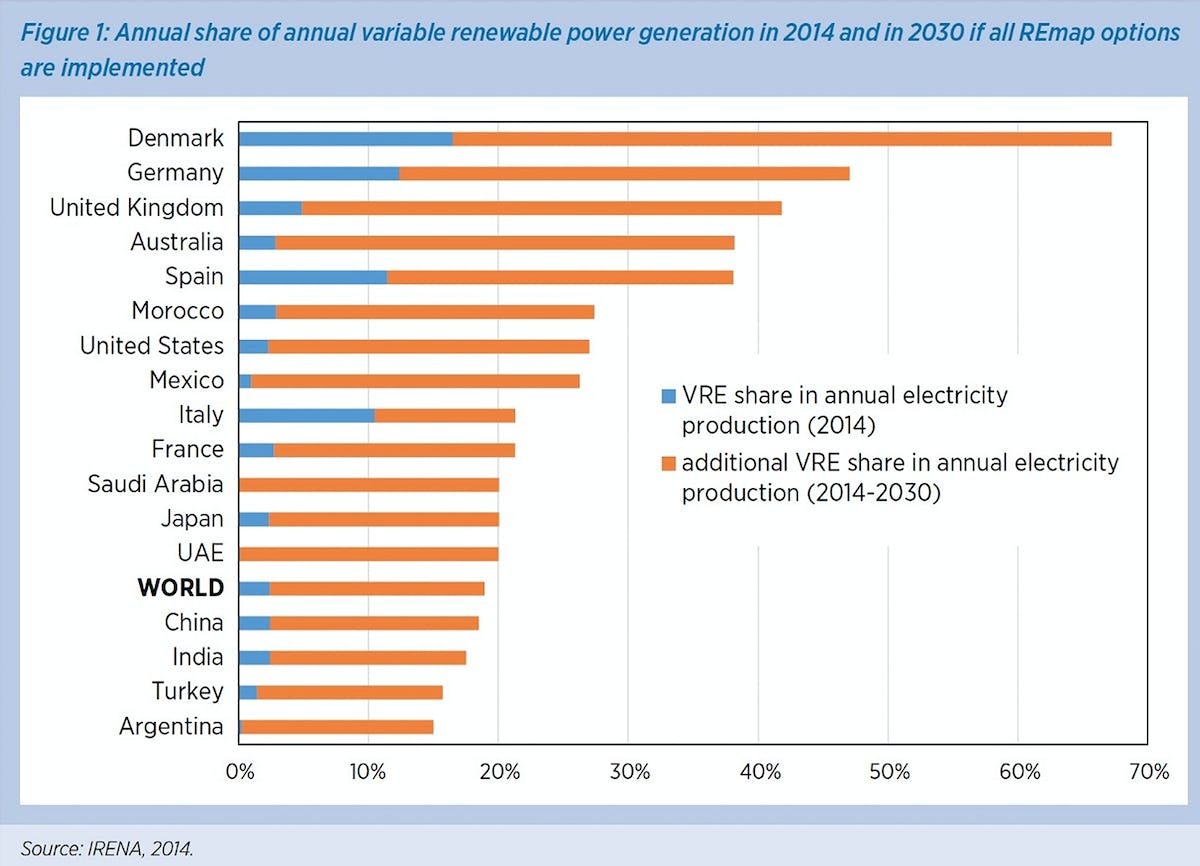 If countries bring this to fruition, the share of renewables in the power sector would increase to more than 40% by 2030. For VRE sources - mainly solar PV and wind power - the share would increase from 3% of power generation in 2014 to around 20% in 2030 (see figure 1).
Furthermore, almost half of PV deployment could be achieved in a distributed manner in the residential and commercial sectors, at both urban and rural sites. This technology roadmap is developed to examine the consequences and opportunities of the power sector transformation in more detail. A range of measures support the integration of higher shares of VRE in the
power, sector, including interconnectors, demand response, smart grid technologies and new pricing mechanisms. Energy storage is only one of many options to increase system flexibility. IRENA's forthcoming technology roadmap on renewable energy grid integration examines all options in more detail, including the role of electricity storage compared to other options.
However, countries considering a transition to power systems based on renewables between now and 2030 must look closely at electricity storage options. Storage should not be considered an end in itself. Rather, it is a means to support a reliable, efficient, cost-effective and clean power sector by facilitating the deployment and integration of renewables. Such considerations apply to countries of three types:
1. Countries with VRE shares exceeding 30%, combined with even higher ambitions;
2. Countries with VRE shares exceeding 20%, with constrained grid infrastructures.
3. Island countries, or those including islands, and countries with remote off-grid power systems.
Until 2030, the number of countries in the first category will be limited. For instance, it includes Australia, Denmark, Germany, UK, Spain and some states in the US. The number of countries in the second category will also be limited. Examples include India, Italy and Japan. Countries in the third category will make up the largest group. They include many of the 52 small developing island states with ambitious plans to move their power sectors towards renewables. For example, countries like Dominica, Fiji, Guyana, Maldives, Nauru, Samoa, Solomon Islands, Timor-Leste, Tonga, Tuvalu and Vanuatu are targeting renewable energy shares of at least 50% before 2030. This category also includes countries in sub-Saharan Africa and other regions where off-grid renewable energy systems can provide electricity access in rural areas. Furthermore, the cost of renewable power generation has decreased such that PV and wind power are cheaper than the diesel generators traditionally used to supply remote communities and islands. Global assessments suggest that 250 GW of the existing 400 GW of installed diesel generators could be replaced by renewable power generation technologies (Blechinger et al., 2014). This warrants the storage to accommodate night-time electricity supply or during periods lacking wind or sun.
For these three groups, the growth of VRE and its greater participation in future power systems will require a rethink by decision makers. Electricity storage technologies provide new opportunities and can play a significant role in restructuring the power system. The importance of storage technologies is demonstrated in REmap 2030, which estimates that 150 GW of battery storage and 325 GW of pumped-storage hydroelectricity will be needed to double the share of renewable power generation by 2030. In this context, IRENA has developed the present complementary global technology roadmap on electricity
storage for renewable power. The roadmap focuses on electricity storage systems, although it recognises that thermal energy storage2 will in many cases be a cheaper solution for storage power from VRE (IRENA and IEA-ETSAP, 2013a).
The aim of this roadmap is to identify in more detail priority areas for action, specify activities for international cooperation among different stakeholders and provide a framework to monitor progress. The choices in this roadmap reflect input and feedback gathered from over 150 stakeholders attending four international IRENA electricity storage policy and regulation workshops in Germany, India, and Japan.
1 The aspirational target for REmap 2030 is derived from the Sustainable Energy for All initiative, which is co-chaired by the United Nations Secretary-General and the World Bank President.
2 Thermal energy storage stocks thermal energy by heating or cooling a storage medium so that the stored energy can be used at a later time for heating and cooling applications. Examples of thermal energy storage technologies are hot water tanks, through phase change materials like ice or paraffin, or through chemical reaction like ammonia dissociation or methane steam reforming.
©IRENA
Note by IDTechEx
The above analysis is taken with permission from the IRENA report, "Renewables and Electricity Storage: a Technology Roadmap for Remap 2030". It predicts that if all the recommendations are implemented, the countries with the most renewable electricity will be Denmark with nearly 70% followed by Germany, UK, Australia, Spain, Morocco, United States, Mexico, Italy then France, Saudi Arabia.
IDTechEx studies the off-grid component of the renewable market. In this it concentrates on High Power Energy Harvesting because that has zero pollution at point of use. The term Off-Grid Renewable Energy includes HPEH but also the polluting burning of renewable biomass, for instance. For more see the new IDTechEx report, High Power Energy Harvesting 2016-2026.