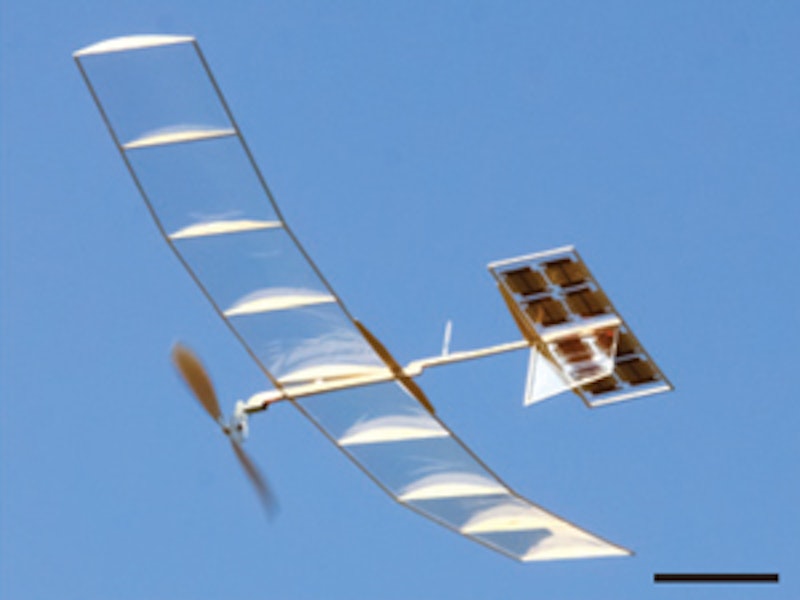 An ultrathin, flexible, stretchable and lightweight 'solar foil' has been produced from perovskite solar cells by researchers in Austria, who demonstrate the material's utility using solar powered miniature aircraft and blimps.
To maximise the efficiency of a solar-powered airborne device, engineers want solar cells as light and thin as possible - for example, the aeroplane Solar Impulse 2, attempting to fly around the world using only solar power, uses 130μm-thick silicon solar cells. Organolead halide perovskites are promising photovoltaic materials because, as direct band gap semiconductors, they absorb light more efficiently, so thinner layers are needed. Unfortunately, the stability of perovskite cells under ambient conditions is a persistent problem, as the perovskite decomposes in the presence of water, and the decay products attack metal electrodes. Heavy encapsulation to protect the perovskite can add to the cell's cost and mass.
In their new design, Martin Kaltenbrunner and colleagues at Johannes Kepler University Linz solution-processed a 250nm-300nm layer of CH3NH3PbI3-xClx perovskite between the conductive polymers poly(ethylenedioxythiophene):poly(styrene sulphonate) and N,N'-dimethyl-3,4,9,10-tetracarboxylic perylene diimide on a PET foil substrate, before adding an interlayer of Cr2O3/Cr and a metal foil to act as the electron-selective electrode, and capping the devices with polyurethane film. The finished solar cells, produced with 100% yield, had a 12% efficiency despite being only 3μm thick and weighing 5.2g m-3. This yields a power-to-mass ratio of 23 W g-1 under a solar irradiance of 1 Sun - a record for photovoltaic technology. Without the Cr2O/Cr interlayer, water vapour penetrating the perovskite led to the production of reactive iodides that corroded the metal electrode almost immediately. The interlayer protected the metal, however, allowing the cells to preserve their efficiency for about 2 days.
To demonstrate the design's potential utility, the researchers produced a solar-powered model aircraft and blimp, and attached a solar cell to a leaf skeleton. In future, they suggest, their design could find applications in robotic insects and drones, and its flexibility and stretchability could be useful in bio-electronics.
Michael Grätzel of the Swiss Federal Institute of Technology in Lausanne praises the work as 'a very nice contribution', although he points out that PbI, one of the breakdown products of the perovskite, is both toxic and carcinogenic. "A glass panel can be made hermetically sealed, but plastics can be easily pierced," he says. Henry Snaith of the University of Oxford agrees that encapsulation is key: "I think the next step is to try to really work on the barrier layers to make the things last for a significant length of time like five or 10 years, and yet still not be that much heavier."
Source and top image: Royal Society of Chemistry
Learn more at the next leading event on the topic: Electric Vehicle Materials Europe 2020