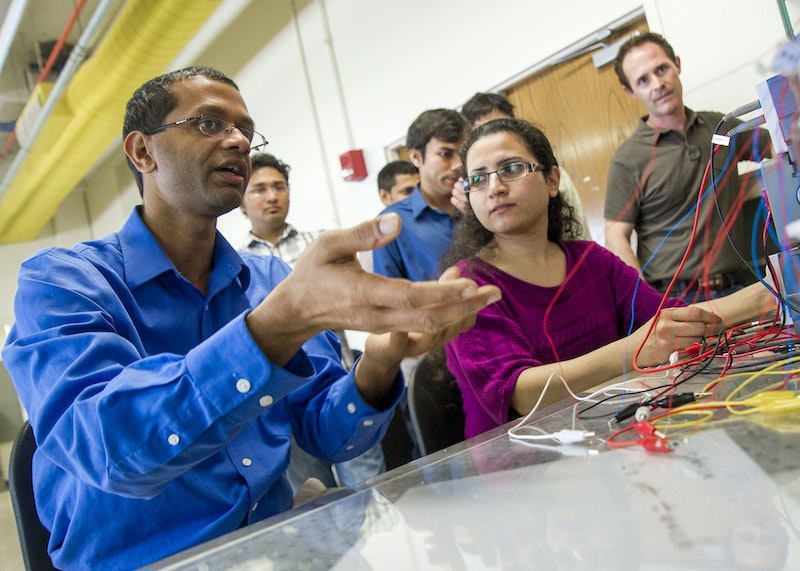 A University of Texas at Arlington engineer is co-leading a team that is seeking ways to harness heat energy lost from automobiles, buildings and other devices. Ankur Jain, an assistant professor in the Mechanical and Aerospace Engineering Department, is one of the principal investigators on a team that was awarded a highly competitive, $225,000 Early-concept Grant for Exploratory Research, or EAGER, award from the National Science Foundation to advance this work.
"There is a lot of heat in our world that goes away untapped and is not converted to energy. For example, many engineering systems experience temperature gradients in time that could be converted to useful electricity," Jain said. "This potentially transformative research will examine pyroelectric effect - the property of certain materials to produce electricity when subjected to a temperature that changes with time at the nano scale."
Jain and his collaborators will try to develop tools that can convert that temperature change to electrical energy. "Toward this, we will examine extremely fast rates of temperature change in nanowire," Jain said. "We don't want tens of degrees over a period of hours, but hundreds of degrees over one second." Jain and his collaborators will build a microdevice capable of producing that large a temperature change. Single nanowires will be embedded in the device to develop a fundamental understanding of pyroelectric effect at the nanoscale to accomplish this.
The team hopes to unearth mechanisms that govern this process, with the eventual goal of developing energy-harvesting microdevices for use in sensing systems, microprocessors and other larger systems. Alexander Balandin at University of California-Riverside and Majid Minary Jolandan at the University of Texas at Dallas are the other investigators. Each principal investigator received $75,000. Khosrow Behbehani, dean of the UTA College of Engineering, emphasized the importance of Jain's work, as well as the prestige of the NSF award. "The NSF's EAGER grants are awarded to researchers with potentially groundbreaking ideas," Behbehani said. "If successful, Dr. Jain's work could have a widespread effect on meeting the energy challenge, creating more sustainable urban communities and significantly reducing the global environmental impact of lost energy from our machines and homes."
Jain directs the Microscale Thermophysics Laboratory, where he and his students conduct research on microscale thermal transport, energy conversion systems, semiconductor thermal management, bioheat transfer and related topics. Jain's research and education activities have been supported by grants from National Science Foundation, Office of Naval Research, Department of Energy, Indo-U.S. Science & Technology Forum and the UTA Research Enhancement Grant. Jain received his Ph.D. and master's of science from Stanford University.
Source and top image: University of Texas at Arlington