Producing electrical power with cardboard, tape, and a pencil 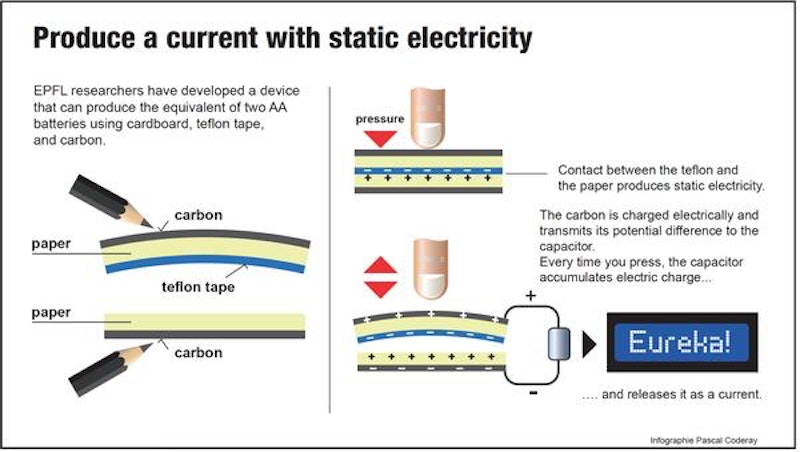 A small device made from everyday materials can generate enough energy to power several diodes. This clever discovery by an École Polytechnique Fédérale de Lausanne (EPFL) postdoctoral student was presented at a global conference on micro- and nano- systems in Shanghai.
All you need to generate a little electricity is cardboard, Teflon tape and a pencil. A team from EPFL, working with researchers from the University of Tokyo, used these materials to make an 8-cm2 device that can generate more than 3 Volts: a simple, eco-friendly and inexpensive system that can produce the same voltage as two AA batteries - enough to operate a remote control.
It all starts with static electricity
The principle underlying this system is well known: static electricity. When two insulators like paper and teflon come into contact, they gain or lose electrons. The system is made up of two small cards, where one side of each card is covered in pencil. The carbon serves as the electrode.
Teflon is then applied to the opposite side of one of the cards. When brought together, they make a sandwich: two layers of carbon on the outside, then two layers of paper, and one layer of Teflon in the middle. They are then taped together in such a way that cannot touch (see the video for more details), giving the system a configuration that makes it electrically neutral.
By pressing down with your finger on the system, the two insulators come into contact. This creates a charge differential: positive for the paper, negative for the Teflon. When you release your finger and the cards separate, the charge passes to the carbon layers, which act as electrodes. A capacitor placed on the circuit absorbs the weak current that is generated.
To boost the device's output, Xiao-Sheng Zhang, a postdoc at EPFL's Microsystems Laboratory and the University of Tokyo, used sandpaper. Pressing the sandpaper firmly against the cards gives them a rough surface. This increases the contact area, which in turn improves the system's output six times. If you press your finger on the cards at a rate of 1.5 times per second, for a short period of time the capacitor will release the same amount of voltage as that supplied by two AA batteries. This is enough to power micro- or nano- sensors, which need only a little electricity to run.
The first 'TENG' made with household materials
This type of system is quite promising since it can be constructed with everyday items. Research on the use of static electricity to generate energy, dubbed 'TENG' (triboelectric nanogenerator), began in 2012. "The one that we developed in the framework of this European project is the first one to use natural, everyday and environmentally friendly materials," said Jürgen Brugger, a professor at the Microsystems Laboratory. This could have applications in the medical field, for example. Ultra low-cost sensors made of paper for various diagnostic purposes, which would be especially practical for developing countries, are already being tested. This paper system could represent the next step, since it would remove the need for conventional batteries. Another advantage is that it does not generate waste, since it can simply be incinerated or left to decompose naturally.
Source and top image: École Polytechnique Fédérale de Lausanne