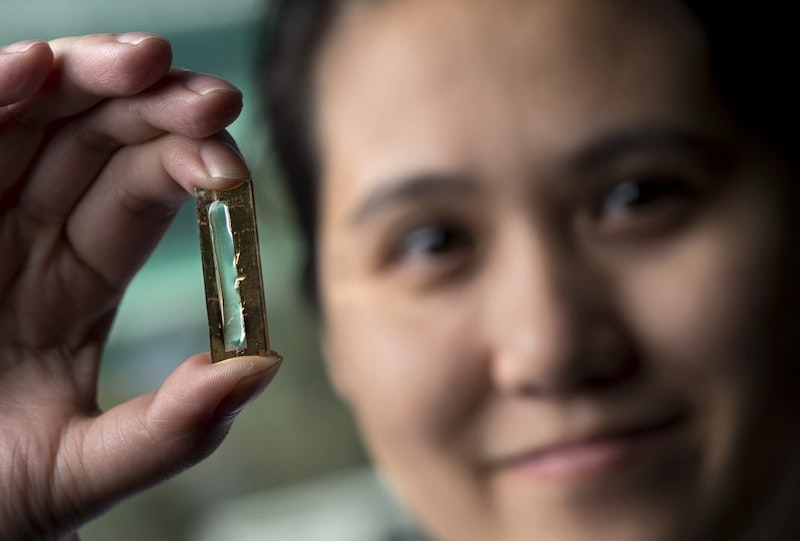 University of California, Irvine researchers have invented nanowire-based battery material that can be recharged hundreds of thousands of times, moving us closer to a battery that would never require replacement. The breakthrough work could lead to commercial batteries with greatly lengthened lifespans for computers, smartphones, appliances, cars and spacecraft.
Scientists have long sought to use nanowires in batteries. Thousands of times thinner than a human hair, they're highly conductive and feature a large surface area for the storage and transfer of electrons. However, these filaments are extremely fragile and don't hold up well to repeated discharging and recharging, or cycling. In a typical lithium-ion battery, they expand and grow brittle, which leads to cracking.
UCI researchers have solved this problem by coating a gold nanowire in a manganese dioxide shell and encasing the assembly in an electrolyte made of a Plexiglas-like gel. The combination is reliable and resistant to failure.
The study leader, UCI doctoral candidate Mya Le Thai, cycled the testing electrode up to 200,000 times over three months without detecting any loss of capacity or power and without fracturing any nanowires. The findings were published in the American Chemical Society's Energy Letters.
Hard work combined with serendipity paid off in this case, according to senior author Reginald Penner. "Mya was playing around, and she coated this whole thing with a very thin gel layer and started to cycle it," said Penner, chair of UCI's chemistry department. "She discovered that just by using this gel, she could cycle it hundreds of thousands of times without losing any capacity."
"That was crazy," he added, "because these things typically die in dramatic fashion after 5,000 or 6,000 or 7,000 cycles at most."
The researchers think the goo plasticizes the metal oxide in the battery and gives it flexibility, preventing cracking.
"The coated electrode holds its shape much better, making it a more reliable option," Thai said. "This research proves that a nanowire-based battery electrode can have a long lifetime and that we can make these kinds of batteries a reality."
The study was conducted in coordination with the Nanostructures for Electrical Energy Storage Energy Frontier Research Center at the University of Maryland, with funding from the Basic Energy Sciences division of the U.S. Department of Energy.
Source and top image: University of California, Irvine