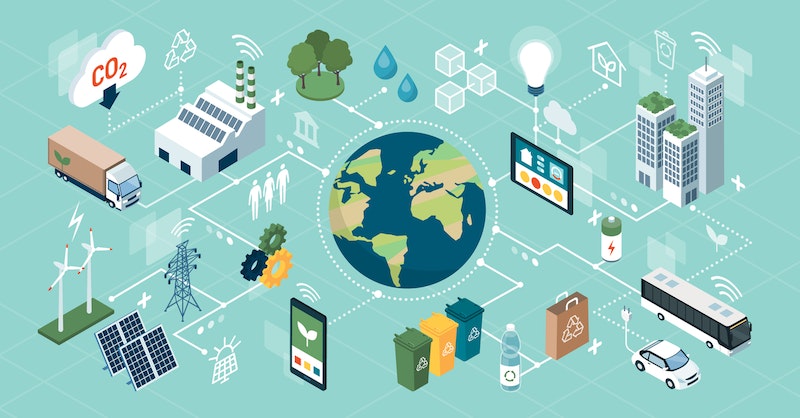 Climate change is one of humanity's most pressing challenges. In an effort to accelerate global action in limiting temperature rises, international lawmakers, business leaders, scientists, and activists convened in Glasgow (U.K.) for the past two weeks in the UN's Climate Change Conference (COP26).
Green technologies took center stage during the event as 40 countries - which make up 70% of the globe's economic activity - committed to fast-track the uptake of clean technologies. In this article, IDTechEx examines three crucial technologies in the fight against climate change that saw advancements (or not) during this COP's proceedings.

The importance of carbon capture, utilization, and storage (CCUS) - including direct air capture (DAC) technologies - to move the world closer to a 1.5°C path was widely recognized during COP26. More than 30 events related to CCUS took place at COP26, covering policy, business, and social and technical challenges to its upscale. The United States and China, the world's top greenhouse gas emitters, announced an agreement to cooperate on fighting climate change and one of the major commitments was to work together on the "deployment and application of technology such as CCUS and DAC". Can these technologies deliver real environmental changes?
To find out more about CCUS, including direct air capture, see the IDTechEx report "Carbon Capture, Utilization, and Storage 2021-2040" (www.IDTechEx.com/CCUS).
DAC: negative emission machines
The very concept of net-zero emissions relies on the balance between the amount of greenhouse gas produced and the amount removed from the atmosphere. Through photosynthesis and geochemistry, nature removes half the carbon dioxide that humans put into the atmosphere, making plants, soil, and oceans massive carbon sinks. But these processes have limited capacity to offset our emissions and the security of the carbon sequestration is uncertain (e.g., when forests catch fire or trees decompose, the locked carbon is released back into the atmosphere).
This is where technological solutions like DAC could turn the tide. The machines that suck up carbon dioxide from the air are more efficient than trees - they use 100 times less land and 200 times less water than biological CO2 removal solutions. The flexibility of DAC allows plants to be installed in non-arable land and in any climate, enabling more countries to participate in helping to solve global warming.
The problem is cost, as the technology is still in its infancy. Current costs range from $100-$800 per metric ton of CO2 abated, whilst afforestation and reforestation can be as low as $5-50/tCO2. If DAC follows a similar development pathway to solar photovoltaics, it will become low-cost in 2077 - far too late for the world's climate targets. The rules for a new global carbon market put into place during the summit are expected to boost investments into solutions such as DAC, which remove CO2 from the atmosphere and generate trading carbon credits.
From burden to bricks: can CO2 use help us meet our climate goals?
It's an exciting time to be a green-tech start-up. Prizes, grants, investments are pouring in as the world looks for solutions to an imminent climate crisis. Amongst 29 finalists developing all sorts of green technology solutions, a carbon utilization company - the Australian Mineral Carbonation International - won the COP26 Clean Energy Start-up Pitch Battle, proposing a technology that converts industrial CO2 emissions into building materials.
Solutions to help decarbonize the construction industry are in high demand as the sector accounts for 37% of energy-related global greenhouse gas emissions. Moreover, storing CO2 emissions essentially forever into billions of tons of building materials, whilst profiting from it, seems like a win-win.
IDTechEx has been following the growing market for CO2 use in building materials such as cement, concrete, and aggregates, where CO2 from smokestacks or from the air is mineralized into these materials. As these technologies often improve the performance of the final products while locking CO2 emissions away, they have the potential to reduce the costs of abating emissions or removing CO2 from the atmosphere. However, they need to scale (from almost nothing) to the giga-tons of CO2 use to make a meaningful impact in curbing the world's emissions - a non-trivial task.

COP26 presented an important opportunity for the decarbonization of on-road transport - a major contributor to global greenhouse gas emissions, with passenger cars and road freight transport contributing over 6Gt of CO2 emissions each year (IEA).
The outcome of the summit was commitments to zero tailpipe emissions by 2040, signed off by 30 countries and 11 automakers, with a new inclusion of vans (AKA light commercial vehicles) - something which hasn't been widely committed to before - as well as passenger cars.
IDTechEx currently predicts that the battery-electric, plug-in hybrid and fuel-cell electric cars will rise to a 70% global market share by 2040 - for more information on IDTechEx forecasts for passenger vehicles and vans, see "Electric Vehicles: Land, Sea, Air 2021-2041" (www.IDTechEx.com/EV).
The commitments are not perfect. For one, like many of the current fossil fuel bans, they don't have legal backing. Their usefulness is in the statement they make to other countries and the industry. They also reinforce commitments that were made anyway. The largest automakers involved - Ford, Volvo, GM - had already announced plans to phase out internal-combustion engines (2030 Europe-only, 2030, 2035, respectively). VW and Toyota did not sign.
The world's largest automaker Toyota is the one to convince. But it has long had its own vision: hybrids in the short to mid-term, fuel cells in the long-term, which it is struggling to let go of.
At their worst, hybrids are an environmental con that confuses consumers. In the past, the Norwegian government outright banned misleading 'self-charging' hybrid ads, and the UK reduced then removed incentives for plug-in hybrids because drivers weren't plugging them in (behaviour not just isolated to the UK).
At their best, hybrids are a short-term transitional step towards zero-emission powertrains. An old narrative, but one now in full swing, and one which accounts for the hybrid sales surges we've seen this and last year. Hybrids have a limited role past the late 2020s.
For fuel cell electric vehicles, their range and refuelling advantage means that heavy-duty applications, such as long-haul trucking or high mileage bus operations, have long offered a potential use for the technology, and progress has been building in 2021.
As the Tesla Semi is increasingly delayed prioritizing batteries for more profitable electric cars, in September 2021 Hyundai announced it would develop fuel cell variants for all its commercial vehicles by 2028.
However, IDTechEx analysts believe hydrogen fuel cells have low prospects in cars due to high upfront cost, expensive and low deployment of hydrogen refuelling infrastructure, high hydrogen fuel prices and questionable emissions reductions if green hydrogen is not used. This was reflected earlier this year as Honda crashed out of the fuel cell car market.
To learn more, the IDTechEx report "Fuel Cell Electric Vehicles 2022-2042" (www.IDTechEx.com/Fuel) explores fuel cell vehicle deployment and growth in light and heavy-duty sectors over a 20-year period.
Perhaps most critically of all, COP26 commitments are undermined by a lack of support from the largest car markets, the US and China (which together account for ~44% of global auto sales), as well as Germany, a factor that reportedly influenced non-signing automakers.
Non-signatories point to the technicalities of globally blanket-banning on-road internal combustion engine vehicles. For example, there is still potential for alternative low-carbon fuels, which would need to be burned in modified internal combustion engines, and there are still car markets that would be very difficult to electrify, such as Africa. But these areas represent a very small part of the solution (and problem) for reducing road emissions.
While it is disappointing in major ways, the commitments are still an unprecedented step that begins to lay the foundation for the future of a decarbonized transport sector.

There were many challenges addressed at COP26, but one of the more underwhelming areas was that of plastic recycling. In fact, most of the headlines focused on Boris Johnson saying that recycling plastic materials "doesn't work". There is certainly truth in that recycling plastic waste is anything but a significant area when it comes to CO2 impact and reducing the amount of single-use plastic should be prioritized, but when it comes to diverting plastics away from landfill or for incineration then the notable commercial progressions should not be overlooked.
In recent months, there has been some big news in chemical recycling. In pyrolysis, a technique heavily criticized by Greenpeace but very much the focus for the likes of BASF and Sabic, Plastic Energy raised EUR 145m following on from some notable partnerships, including ExxonMobil. An agreement between Mura and Mitsubishi Chemicals showed an increasing demand for a competitive hydrothermal technology developed by Licella. Meanwhile, in depolymerization (a plastic-to-monomer process), Carbios announced the signing of an expression of intent from a "major PET producer" and SK Global Chemicals took a stake in Loop Industries.
Critics will rightly say that even if the notable capacity announcements are realized this will still be a drop in the ocean relative to global plastic production, but the industry is certainly on the move. For more information, see the market report "Polymer Recycling Technologies 2020-2030" (www.IDTechEx.com/PolymerRecycling).

IDTechEx has been tracking technology innovations for over 20 years, with in-depth, independent analysis across a broad range of topics including Green Technology, Electric Vehicles, Energy Storage, Energy Harvesting & Off Grid, Food & AgTech, and Smart Cities. Our full portfolio of research can be found at www.IDTechEx.com.