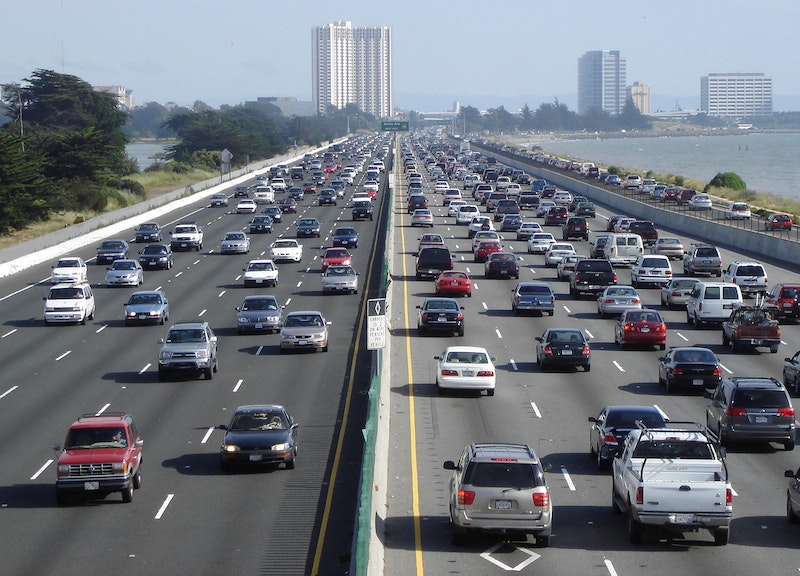 RethinkX and Barclays Research have issued carefully prepared research concluding that the global peak for cars will be in only a few years. Analysts IDTechEx say around 2030. Most experts see it as inevitable. It is a perfect storm because the increasing pressure is coming from more and more directions. Wikipedia lists 18 of them and here come some more.
Cars must be driven out of cities to tackle the UK's air pollution crisis, not just replaced with electric vehicles, according to the UK government's top adviser talking in August 2017. Prof Frank Kelly said that while electric vehicles emit no exhaust fumes, they still produce large amounts of tiny pollution particles from brake and tyre dust, for which the government accepts there is no safe limit.
Toxic air causes 40,000 early deaths a year in the UK, two million in China. Sale of new diesel and petrol cars will be banned from 2040 in the UK and France, with only pure electric vehicles available after that. The Netherlands and Norway plan 2025, Germany, Ireland and India plan 2030. Paris, Madrid, Mexico City and Athens ban diesel from city centres from 2025.
"The government's plan does not go nearly far enough," said Kelly, professor of environmental health at King's College London and chair of the Committee on the Medical Effects of Air Pollutants, official expert advisers to the government. "Our cities need fewer cars, not just cleaner cars."
Progress is being made. London and other cities are quietly repurposing multi-storey car parks as apartments with minimal car parking. Greenwich Peninsula in London is building office blocks and other buildings on almost all street level parking, openly declaring that its policy is to strongly deter parking for the O2 stadium.
From Japan to Mexico, the young now rarely aspire to own a car: they car share or use public transport. They contain costs, use social media on a journey and internet shopping. Few will want to buy driverless cars costing even more. Meanwhile, the UK government's new research shows the fastest and most cost-effective measure to cut the nitrogen dioxide pollution largely caused by diesel engines is to charge dirty cars to enter urban areas, sharply reducing numbers.
Kelly said enabling people and goods to move easily and cheaply around cities is crucial, especially as their populations are growing fast, and backed better public transport as the solution: "The safe and efficient movement of people around the capital can only be achieved through a clean and expanded mass transit system - served by buses, overground train and the underground system - and by as much active transport in the form of walking and cycling as is feasibly possible. Encouragingly, attitudes toward car ownership do appear to be changing, with younger Londoners increasingly replacing little-used vehicles with car club membership and ride-sharing apps."
Oliver Hayes, Friends of the Earth air pollution campaigner, said, "Electric cars are critical in the fight against climate change and deadly air pollution, but they're not a panacea. We must now build the infrastructure that reassures ordinary people that cycling and walking is safe, and invest in public transport that is consistently clean, cheap and reliable."
Raghu Das CEO of IDTechEx adds, "As the day approaches when a pure electric car costs less to buy than a conventional one and a tiny fraction of the cost to run, car manufacturers are racing to make them before it is too late. However, peak car means peak electric car is coming too. A pure electric bus emits far less particulate from wheels and brakes than cars on a per passenger basis and uses much less road space. The deployment of buses is increasing and added to that, many new versions create new markets, such as energy independent ones now available. Trolley buses now typically double as pure electric buses where there is no catenary and driverless, box-like buses for 6-20 people are looking good in trials. Autonomy will give a smoother ride, take even less road space and increase range. The new taxi-bus that may switch between bus and taxi mode. Little wonder that our report Electric Buses 2018-2028 greatly outsells our reports on cars. We forecast no peak in electric bus sales: they will become a larger value market than electric cars after peak car occurs. Even in 2027, over one million pure electric buses sold yearly will be a value market equivalent to over 25 million cars. Savvy governments will divert funds to the new transport modes including the end game of energy independence and the reduction and elimination of batteries, the main cost and source of trouble. The new IDTechEx report Battery Elimination in Electronics and Electrical Engineering is attracting considerable attention."
IDTechEx stages the world's first conference on Energy Independent Electric Vehicles at the Technical University of Delft September 27-28 with Toyota as keynote speaker. Land, water and airborne EIVs and their new enabling technologies are covered.
Top image: wikipedia