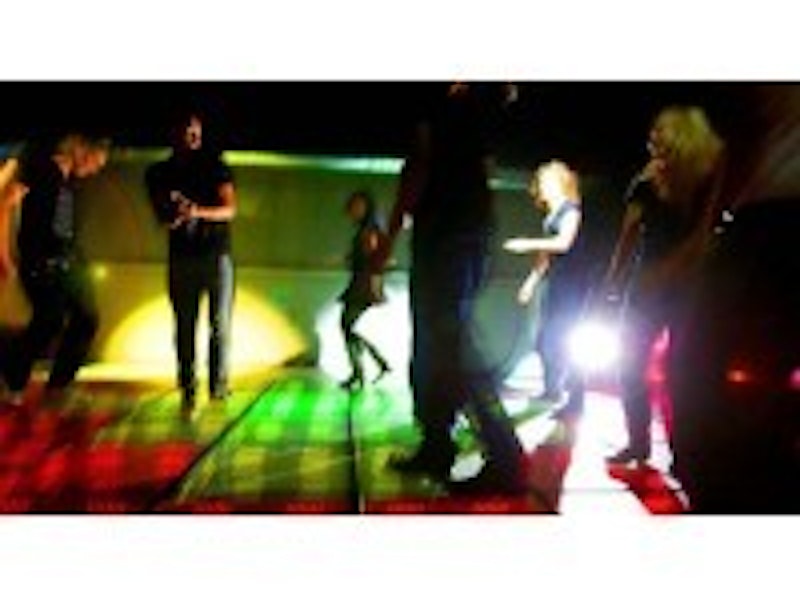 Club Surya in London is one of a new generation of "eco-clubs" which encourages its patrons to work towards climate change. The club's main feature is the piezoelectric dance floor.
The dance floor uses piezoelectricity where crystal and ceramics create a charge to generate electricity. The nightclub has a "bouncing" floor made of springs and a series of power generating blocks which produce a small electrical current when squashed. As dancers move the floor up and down to squeeze the blocks, the current is fed into nearby batteries which are constantly recharged by the movement of the floor. The electricity created in this way is used to power parts of the nightclub such as the sound and lighting.
The owner and developer of Club Surya, Andrew Charalambous, estimates that a full dance floor could provide 60% of the club's energy needs. The club also has its own wind turbine and solar energy system. Mr Charalambous hopes to inspire young people to combat global warming.
In Rotterdam, Club Watt also houses an energy harvesting dance floor which generates power for the clubs' lights, the average dancer making around 20 watts of electricity. That electricity is used to power the light show in and around the floor. "For this first club, we thought it was useful for people to see the results," said Michel Smit, an adviser on the project. "But if the next owner wants to use the electricity to power his toaster, it can do that just as well." The dance floor is loaned out for demonstrations and the club also has rainwater-fed toilets and low-waste bars where almost everything is recycled.
One of the first nightclubs to use this energy harvesting floor technology was the Sustainable Dance Club in the Netherlands. Created by Enviu, an environmental organisation, together with Dutch architectural firm Doll the club opened in October 2008. The dance floor is a fusion of electronics, embedded software and smart durable materials. It consists of modules measuring 65 x 65 cm, each of which makes a vertical movement of up to about 1 cm when danced on. These movements are transformed by an advanced electric motor into electric power. Every person is able to produce 5-20 Watts of power, depending on his or her weight and activity on the dance floor.The generated energy is then used to power the interactive elements of the floor. The technology of the dance floor is continuously being developed so that it is possible to use the generated energy for wider uses.
In order to spread the sustainable message to a wider audience, the Sustainable Dance Club recently displayed their dance floor at the Australian Museum in Sydney.
This technology has many applications for the generation of electricity from the movement of people inlcuding pedestrian traffic in urban spaces, to vehicular traffic on roads.
Top image source: UberReview
For more attend: Energy Harvesting & Storage USA 2009
Also read: Energy Harvesting and Storage for Electronic Devices 2009-2019